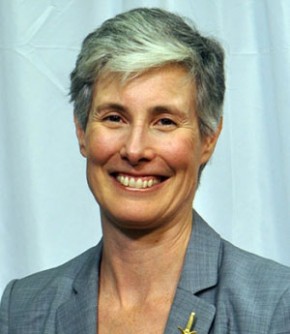 Amy R. Pritchett has been named the head of the Department of Aerospace Engineering at Penn State, effective Aug. 15.

“Amy won over our community with her unique approach of technical rigor and sense of community,” said Amr Elnashai, Harold and Inge Marcus Dean of Engineering. “Her leadership style will undoubtedly propel the department to new levels of accomplishment while maintaining and even enhancing its technical and social fabric.”

Pritchett will take over departmental duties from Philip J. Morris, Boeing/A.D. Welliver Professor of Aerospace Engineering, who has been serving as interim department head since the departure of George Lesieutre, who accepted a position as associate dean for research in the College of Engineering in August 2016. Morris will remain as a professor within the department.

“I’ve found the faculty to be energizing with their new ideas and sheer love of aerospace engineering, and I’m excited to be joining in with so many noted experts spanning fields important to the future of aerospace,” said Pritchett. “Both aviation and spaceflight are on the cusp of new breakthroughs, and I hope to take the insights and knowledge that our department has been generating here at Penn State and help disseminate them broadly—not just to the research community, but also to the decision makers in industry and government who need to know what we can contribute. Exciting things are happening in the department!”

Pritchett served a two-year term as the director of NASA’s Aviation Safety Program from 2008 to 2009, and served as a senior research fellow at Delft University of Technology in 2002. Prior to joining Georgia Tech in 1997, she was a doctoral student and researcher at the Massachusetts Institute of Technology (MIT).

She is a Fellow of the Human Factors and Ergonomics Society and an Associate Fellow of the American Institute of Aeronautics and Astronautics (AIAA). She chartered the Aviation Safety Assurance Research Planning team in 2011, for which she received a NASA Group Achievement Award. She also received the National Aeronautic Association 2008 Robert J. Collier Trophy as part of the Commercial Aviation Safety Team, the AIAA Lawrence Sperry Award in 2007 and the Georgia Tech Center for Enhancement of Teaching and Learning Curriculum Innovation Award in 2014. In 2009, the AIAA Digital Avionics Technical Committee created the Dr. Amy R. Pritchett Digital Avionics Scholarship to recognize technical and service contributions by college students in the field of avionics.

Pritchett’s research interests include examining the intersection of automated and intelligent technologies, expert human performance and safety-critical operations. This framing particularly applies to modern commercial aviation, but also extends to other areas such as long-duration spaceflight missions.

“To have a department head who is concurrently a top researcher is a great feature of Amy’s appointment,” added Elnashai. “She will not only lead the academic programs in the department, but she will also play a pivotal role in its research enterprise.”

Pritchett earned her bachelor’s, master’s and doctoral degrees in aeronautics and astronautics from MIT.