An Achilles Heel of AML 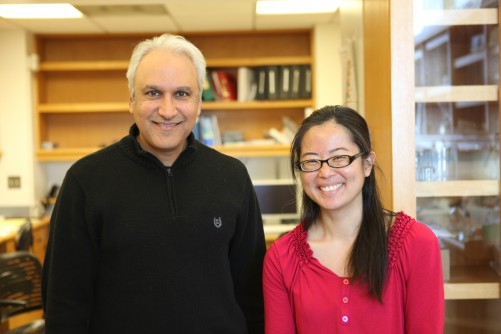 Newswise — The key to treating one of the most common types of human leukemia may lie within mutations in a gene called FLT3, according to new research led by physician-scientists at the University of California, San Francisco (UCSF) Helen Diller Family Comprehensive Cancer Center. Published this week in the journal Nature, the work validates certain activating mutations in the FLT3 gene as targets for acute myeloid leukemia therapy—a critically important finding for developing drugs. “These mutations are critically important for the survival of leukemia cells that harbor them,” said Neil Shah, MD, PhD, who led the research, and is co-leader of the Hematopoietic Malignancies Program at the Helen Diller Family Comprehensive Cancer Center at UCSF and the Edward S. Ageno Distinguished Professor of Hematology/Oncology. “Our results also identify drug-resistant mutations in FLT3 that represent high-value targets for future drug development, and will hopefully rekindle interest in developing potent FLT3 inhibitors for the treatment of acute myeloid leukemia.” The new work also suggests why a handful of older drugs developed to treat acute myeloid leukemia by targeting FTL3 have previously failed in clinical trials. The problem with these drugs was not lack of precision but of power—they were aimed at the right target needed to stop the cancer, but most likely did not hit this target hard enough. Patients in the future may be better served by therapies that involve combinations of multiple, more potent drugs that can suppress all drug-resistant forms of FLT3, said Shah, whose lab is working to identify such compounds and bring them to the clinic as quickly as possible. A COMMON AND DEADLY FORM OF CANCER Acute myeloid leukemia occurs when the precursors of our own blood cells become corrupted by mutations in their DNA. The mutant precursors then fail to produce several critical components of blood: white cells, which fight infections; red cells, which carry the blood’s oxygen supply; and platelets, which clog vessels when they are cut and help minimize blood loss. Instead, the mutant precursors give rise to leukemia cells, which accumulate in the bone marrow and bloodstream, crowding out the healthy blood components, and commonly lead to life-threatening infections, anemia, and bleeding. Over the last several decades, the five-year survival for acute myeloid leukemia has not improved, even as better diagnostic tests, imaging techniques and treatments have driven down mortality for other forms of cancer. According to the National Cancer Institute, 1 in 256 Americans will be diagnosed with acute myeloid leukemia in their lifetime and today nearly four out of five people with the disease die within five years of their diagnosis. The goal of therapy is to eliminate cancerous cells altogether from the bone marrow, and the discovery several years ago that many people with acute myeloid leukemia have activating mutations in the FTL3 gene, coupled with the relationship of these mutations to poor prognosis, led scientists to speculate that targeting this mutated gene might be an effective way to fight the cancer—but only if the gene was critically important for the survival of leukemia cells. Several drugs were tested in the clinic, but failed to put the disease into deep remission. The cause for these failures came down to one of two possible reasons: either the FTL3 gene mutations were not central “drivers” critical for cancer to develop and leukemia cells to survive, or the drugs themselves could not achieve the necessary degree of inhibition of FLT3. The new work by Shah and his colleagues demonstrates the latter. They worked with eight leukemia patients who participated in a clinical trial involving a compound known as AC220, the first clinically-active FLT3 inhibitor. All eight relapsed after first achieving deep remissions with AC220. In collaboration with Pacific Biosciences, a Menlo Park, Calif. company, a new sequencing technology was adapted to more sensitively and precisely detect drug-resistant mutations. The team showed that in all eight cases, one or more of these mutations evolved at the time AC220-resistant disease developed. They are now searching for compounds that can specifically target these mutated, AC220-resistant forms of FTL3, and have identified several promising candidates, one of which is currently being evaluated in a clinical trial at UCSF by Catherine Smith MD, who works in Shah’s laboratory and is the first author of the article. The article, “Validation of ITD mutations in FLT3 as a therapeutic target in human acute myeloid leukaemia” by Catherine C. Smith, Qi Wang, Chen-Shan Chin, Sara Salerno, Lauren E. Damon, Mark J. Levis, Alexander E. Perl, Kevin J. Travers, Susana Wang, Jeremy P. Hunt, Patrick P. Zarrinkar, Eric E. Schadt, Andrew Kasarskis, John Kuriyan and Neil P. Shah is published in Nature on 4/15/12. After publication, the article can be accessed at: This work was funded by grants from the Leukemia and Lymphoma Society, the Doris Duke Charitable Foundation, and the National Cancer Institute, one of the National Institutes of Health. Additional support was provided by Art and Alison Kern and the Edward S. Ageno family. In addition to UCSF, authors of this study are affiliated with the University of California, Berkeley, Pacific Biosciences, Mount Sinai School of Medicine, Johns Hopkins University, the University of Pennsylvania and Ambit Biosciences in San Diego. UCSF is a leading university dedicated to promoting health worldwide through advanced biomedical research, graduate-level education in the life sciences and health professions, and excellence in patient care. ### Follow UCSFUCSF.edu | Facebook.com/ucsf | Twitter.com/ucsf | YouTube.com/ucsf