In the study, cost per visit for critically ill patients decreased by more than 20%. 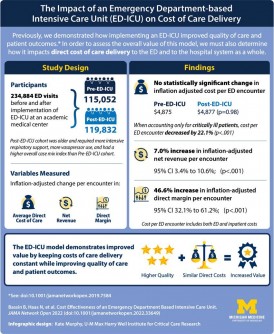 The impact of an Emergency Department-Based Intensive Care Unit on Cost of Care Delivery.

Newswise — Across the country, many intensive care units are strained for capacity. This prolongs the boarding process in the emergency department, when critically ill patients – for whom every minute and hour is crucial – wait for open ICU beds.

To provide more rapid access to critical care, University of Michigan Health opened its Emergency Critical Care Center in 2015, one of the first ICUs in the country to be housed within an emergency department.

A previous study found that the deployment of this model improved quality of care and patient outcomes by decreasing both mortality rates and ICU admission rates for emergency department patients. And according to a new study published in JAMA Network Open, the ED-based ICU model does so without raising costs.

In a follow-up study, researchers at Michigan Medicine analyzed over 230,000 adult emergency department visits between September 2012 and late April 2017, comparing costs from before and after the Emergency Critical Care Center opened in mid-2015. Results reveal that direct total cost per visit, when adjusting for inflation, held flat after implementation of the ED-ICU model.

“For all patients visiting the emergency department, from those with ankle sprains to those with critical illness, we are seeing similar costs per visit with better clinical outcomes – which equates to higher value by utilizing the ED-ICU model,” said Benjamin Bassin, M.D., first author of the paper and director of the Emergency Critical Care Center, or EC3, at U-M Health.

When examining solely critically ill ED patients, researchers found total direct cost per encounter decreased by 22.1% with implementation of the ED-ICU. The reduced costs, researchers say, are likely due to early, coordinated critical care delivered in the ED-ICU, rather than when an ICU bed became available.

“Previous studies have shown the boarding process of waiting in the ED for an inpatient ICU bed to become available is associated with lower survival rates for critically ill patients across disease states,” said Nathan Haas, M.D., co-author of the paper and assistant medical director of U-M Health’s EC3.

“Providing high-quality critical care to patients earlier via an ED-ICU can likely slow progression of disease severity and prevent complications that would occur during the ED boarding process, resulting in both improved downstream outcomes and overall cost reductions.”

Since the implementation of EC3 in 2015, leaders at U-M Health collaborated with over 15 health systems in the U.S. and seven internationally that have sought to establish similar ED-ICU models. Researchers believe the findings of cost neutrality will lead to many more hospitals embracing the concept.

“We have been contacted by many hospitals both nationally and internationally considering this model based on the improved patient outcomes reported in our previous study,” said Robert Neumar, M.D., Ph.D., senior author of the paper and chair of the Department of Emergency Medicine at U-M Health. “Combining the evidence of improved quality with no increase in overall cost defines the positive health care value of the ED-ICU model. As a result, we anticipate health systems across the country will have increased interest in adopting the model.”

Bassin reported receiving salary support from the Joyce and Don Massey Family Foundation during the conduct of the study. No other disclosures were reported.