An Idea Whose Time Has Come? Disposable Timer Could Be a Nurse’s Best Friend 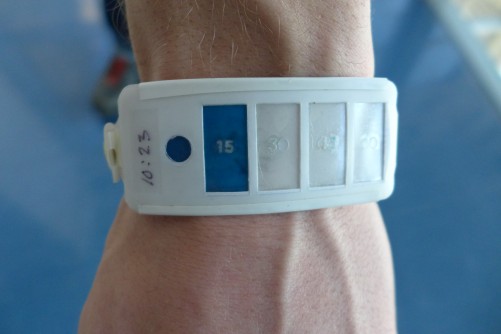 Biomedical engineer Sarah Sandock has invented a simple, inexpensive, single-use timer that could be worn like a wristwatch to tell a nurse when to administer a drug or unhook a medical device.

Newswise — MADISON, Wis. — In medicine, time isn’t just money: it can mean the difference between life and death. Clot-busters must be given in the first hour of arrival in a hectic emergency room. Intravenous medications can spoil, and catheters that overstay their welcome invite infection.

The advance of technology translates into heavier, more complex workloads for the nurses on the frontlines of medical care. To ease the burden, biomedical engineer Sarah Sandock has invented a simple, inexpensive, single-use timer that could be worn like a wristwatch to tell a nurse when to administer a drug or unhook a medical device.

Sandock is a Milwaukee native who received bachelor’s and master’s degrees in biomedical engineering from the University of Wisconsin-Madison in 2012 and 2013.

In her first year at UW-Madison, Sandock was inspired by bacteria that had been genetically engineered to create rhythmic pulses. She immediately thought of timing: “I thought, this is cool; you could grow your own timer instead of manufacturing one!”

When that brainstorm seemed impractical, she started thinking of possible uses for a cheap, disposable timer. “As I was in biomedical engineering, and most of my relatives are practicing physicians, I looked for applications in the health care space,” she says.

Sandock participated in a Three-day Startup event, a program designed as a dry run for would-be entrepreneurs in Madison, and began to get serious about actually starting a company. She used a disposable-timer business as an academic exercise in two business school classes, “and halfway through, I became passionate about the project.”

Sandock knew that one person’s passion is nowhere near enough to start a company. Would nurses appreciate the idea? Would they ask for the timer and use it? She says the answer came pretty quickly when she followed nurses working in Madison, Milwaukee and elsewhere: “They asked me, ‘Do you have them now? We can use them now.’”

The many technological innovations in health care have countless benefits, but Sandock contends they have not made nurses’ lives easier. “They see this as a product that is geared to help them with their problems.”

Sandock has working prototypes in hand and is focusing on getting the timers manufactured. She sees two key categories of initial demand for her product: medicines that must be delivered within a certain time window, and medical devices that must be removed or changed at a specific time point, often to avoid a hospital-acquired infection.

Sandock has one patent application filed but is reluctant to specify what technology underlies the inexpensive timers. Her company, Dock Technologies, has an office at the Madison co-working space 100state, and is working with people in the medical field to refine the displays for maximum utility in specific uses.

Dock Technologies has attracted investment from the Weinert Applied Ventures in Entrepreneurship (WAVE) class at the Wisconsin School of Business, several Wisconsin physicians, and the National Collegiate Innovators and Inventors Alliance. Sandock also has gotten advice from the Law School’s Law & Entrepreneurship Clinic.

A single-use medical device that wholesales for about a dollar has to be accurate. And beyond that, the standard is pretty simple, Sandock says. “Does it save time? Does it make a nurse’s life easier?”###