An Ocean of Possibilities 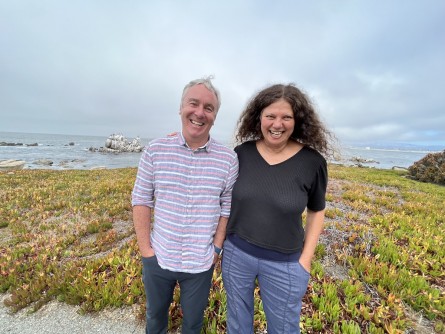 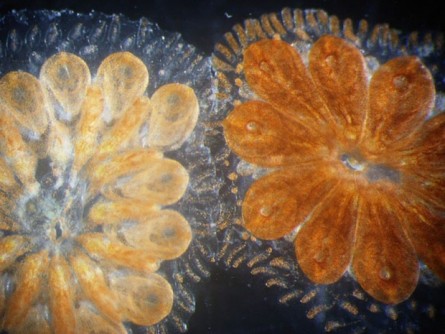 Under the microscope, a Botryllus colony looks like a bouquet of flowers, although in reality each “petal” is a separate organism with its own heart, gills, digestive system, brain, and blood cells.

Newswise — Biomedical research has long focused on certain model organisms, such as the mouse, fruit fly, and nematode worm C. elegans, partly because they’re easy to work with and partly because of their relevance to human biology. But the ocean is full of organisms that also offer an opportunity to develop new approaches to human health, and it turns out that the closest living invertebrate relative to humans is from the seas – a species of sea squirt called Botryllus schlosseri, or the star tunicate.

This curious little animal starts life as a tiny tadpole-like creature with two brains, freely swimming in the ocean but barely visible to the human eye. Then Botryllus undergoes metamorphosis: each individual sheds its embryonic brain and settles on rocks close to shore, using asexual reproduction and fusion with neighboring kin to form colonies. Botryllus is one of several animals, ranging from sharks to starfish, studied at Stanford University’s Hopkins Marine Station, located on the Monterey coast. Members of the Genomics and Data Science Platforms at Chan Zuckerberg Biohub are collaborating with Hopkins researchers to help generate insights into genome evolution and human development by studying the star tunicate and other marine creatures.

“Our knowledge of biology comes from a slim set of models that everybody is studying – mouse, fly, human tissue, C. elegans. We have robust molecular tools for working with those organisms,” says Hopkins researcher Ayelet Voskoboynik. “But to adjust molecular methods to non-model organisms is not trivial. It’s not that simple to get good DNA or RNA and be able to do something with the data. Working with the Biohub gave us this powerful tool.”

The collaboration with Hopkins evolved from the Biohub’s Intercampus Research Award program, in which one of the teams – which included Voskoboynik as well as Irv Weissman, director of Stanford’s Institute for Stem Cell Biology and Regenerative Medicine, and Chris Lowe, a Stanford professor of biology who is now also supported through a separate CZ Biohub Investigator award – focused on looking beyond the most well-studied model organisms to expand our understanding of human health.

“Botryllus is a spectacular system where everything is in front of us, and we could ask a lot of questions, and we can reach a lot of answers, such as, where did these biological phenomena evolve from? What's the value of these evolutions to the community of organisms and the eventual development of us?” says Weissman.

Weissman and Voskoboynik are co–senior authors of a study published recently in Proceedings of the National Academy of Sciences (PNAS) showing how studying Botryllus gene expression across its lifecycle can be used to understand neurodegenerative disorders such as Alzheimer’s disease in humans.

One of the aspects of this sea creature that makes it attractive to researchers is its very rapid lifecycle, where a new generation of individuals develops and dies every week. Not only has this model been useful for comparing different modes of reproduction (Botryllus reproduce both sexually and asexually), it’s also been key for studying neurodegeneration.

In the PNAS study, the team sequenced the transcriptome of the tunicate’s brain, to identify what genes are expressed at any given time. “We wanted to characterize the brain of this animal at different stages of its life,” says postdoctoral scholar Chiara Anselmi, first author of the paper. “Through this characterization we found many homologous genes also observed in human degenerative diseases, in particular Alzheimer’s, Parkinson’s, and Huntington’s disease. Moreover we observed that genes associated with neurodegenerative disease are differentially expressed between younger and older Botryllus colonies.”

One of those genes, for example, is APP, the amyloid precursor protein famously implicated in Alzheimer’s disease. “In Botryllus, we see the expression of APP is upregulated in the brain of old versus young colonies, and we are currently studying its importance to the brain’s development,” says Voskoboynik, who leads the Botryllus work at Hopkins. “I was surprised that, despite being extensively studied in humans in association with neurodegeneration, very little is known about APP’s normal function. By studying APP in Botryllus, a simple animal model that undergoes weekly regeneration of its entire central nervous system, we have the potential to better understand the role of this gene in human neurodegeneration diseases.”

Weissman, Voskoboynik, and collaborators have learned much about the evolution of stem cells and the immune system by studying the star tunicate. Hopkins Marine Station may be the best place in the world to study them, having the oldest and largest colonies of any lab. “Only here, in all the world, can we study a 20-year-old colony,” says Anselmi. “We can't do that in any other lab. And Hopkins and Biohub scientists were the first to sequence the Botryllus genome and transcriptome.”

CZ Biohub scientists have produced single-cell atlases of a number of species, including humans, fruit fly, zebrafish, and mouse lemur. Soon they will add Botryllus to that list.

“The knowledge we gained from sequencing the Botryllus genome, and the methods we have developed in collaboration with the Quake Lab, have already been used to accurately sequence the human genome,” Voskoboynik says. “Botryllus’s characteristics make the knowledge we gain from it very relevant for human application. Now with the Biohub collaboration, we have the tools to study Botryllus’s biological phenomena on the molecular level, where we can connect phenome to genome in a very elegant way.”

Norma Neff, the head of Biohub’s Genomics Platform and a long-time collaborator with Weissman’s Botryllus team, likens tunicates to water bears, or tardigrades – resilient organisms that can handle extreme conditions, such as radiation exposure or high concentrations of salts and metals. “They’re very much a survival-oriented species,” Neff says. “All these processes that go on in these organisms that we don’t understand probably have some practical usage once we understand how they work.”

Another interesting characteristic of the star tunicate is how colonies interact – when colonies make contact, the colonies will either fuse or reject one another. Weissman, Voskoboynik, and collaborators identified a single gene that controls recognition of self versus non-self, determining the fusion rejection outcome. They found that within fused colonies a competition takes place between somatic and germline stem cells.

“Amazingly, all of the sperm and eggs in fused colonies came only from one of the partners, and the winner between any pair was heritable! This was an aha moment,” says Weissman.

“We found that the competitive blood stem cells were the genesis of most late-onset blood diseases in patients, and this has led us to seek and find the specific genes within stem progenitor cells whose mutations improve their ability to compete at the cost of an increased risk for disease. Our lab and some others have found therapies that target these diseased blood stem cells,” Weissman says. “Now my team is looking to see if this is true of other adult-onset diseases such as atherosclerosis and lung and tissue fibrosis, and for cancers such as glioblastoma. I’m not sure if any of these directions would have emerged if I hadn’t started the lab at Hopkins Marine Station.”

Neff and her team are also working with Lowe, who is blazing new trails in the molecular cell biology of marine organisms, and Steve Palumbi, another member of the Biohub Intercampus Research award team and a Stanford professor of biology based at the Hopkins Marine Station.

“If you’re interested in biodiversity, the majority of biodiversity is in the ocean. A marine station has an incredibly important role,” says Lowe.

Palumbi’s work supported by Biohub focuses on the genome stability of coral, and specifically how they might adapt to climate change. In a recent study he co-authored, now deposited on the preprint server bioRxiv, he and collaborators sequenced the full genomes of corals from separate branches of the same colony and from the sperm those branches made. They used high-fidelity sequencing to find thousands of mutations unique to each branch and asked if they also were found in the sperm. “Corals do not have early separation of germ lines from somatic cells and should pass somatic mutations on to offspring,” Palumbi says.

But the results showed this was true only in 24% of mutations. Phylogenetic analysis of the data suggested this 24% is derived from a previously unknown line of active stem cells that grow into each branch and then create germ and somatic cell lines. “For a coral that is hundreds of years old, this requires active stem cell lines that live hundreds of years,” he says. “We don’t know how they can do that.”

One of the organisms that Lowe studies is Schizocardium californicum, a hemichordate worm native to California waters, commonly known as the acorn worm. Taking a genomic approach, with assistance from Biohub scientists, Lowe is investigating how the body plan of this species changes from the larval to adult stages, and what happens at the cellular level.

In another project he is investigating the triggers of regeneration in this worm. “It’s still a long way from translational research, but it could have some direct links to biomedicine if we can figure out the molecular trigger that causes this animal to regenerate,” he says.

While much of his research is fundamental in nature, Lowe says there could eventually be applications. “I believe that the unusual solutions to life’s challenges that marine animals have come up with do provide unique opportunities for discovery,” he says.