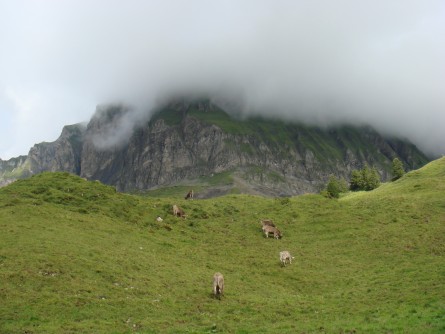 Alpine cattle in the Canton of Schwyz, Switzerland

Newswise — An international team of researchers has shown in unprecedented detail that prehistoric farmers took their animals away from permanent settlements to graze in more fertile areas – probably because of high demand for land locally.

Analysis of strontium isotopes in teeth of Neolithic cattle suggests that early Europeans used specialised strategies to manage herding, according to a study by the universities of Basel, Southampton (UK), Bristol (UK) and the The Curt-Engelhorn-Centre for Archaeometry. It’s thought these strategies helped to maintain larger herds, and may have contributed to increased social inequality.

Findings are published in the open-access journal PLOS ONE.

Archaeologist Professor Alistair Pike, from the University of Southampton, who worked on the study, explained: “Over the course of the Neolithic period, cattle became increasingly important for milk, manure and animal power rather than just for meat. This led to larger herds, and greater demand for grazing resources.  To accommodate these larger herds, it has always been speculated that farmers needed to find grazing grounds further away from permanent settlements – however, until our study, there has been little direct evidence for this.”

To reconstruct the movement of cattle and explore how the herd may have been managed, the researchers analysed strontium isotopes in 39 molar teeth from 25 cattle from the Neolithic settlement of Arbon Bleiche 3, in what is now Switzerland. The settlement, which was occupied for just 15 years in the 34th century BC, had 27 houses, and cattle from 12 of these were sampled.

Strontium isotopes are found in bones and teeth and its geochemical signature can be used to infer geographic location. Scientists can relate findings from their analyses to the isotopic composition of local soils and plants (which can vary over relatively short distances), thus, in this case, indicating different areas the cattle may have been led to for grazing.

Commenting on the archaeological site in Switzerland, Professor Pike said: “Arbon Bleiche 3 at Lake Constance gave us an unprecedented opportunity to study how cattle were managed. Most archaeological sites span many generations or centuries, but because this was only occupied for 15 years, we can be pretty sure the cattle were all living and grazing at about the same time. This allowed us to reconstruct the movement of individual herds and get a far more detailed picture of how these livestock were being moved.”

In addition, the researchers found that the three herding strategies were not uniformly represented in various areas of the settlement. This suggests differential access to the most favorable grazing grounds, which could have contributed to social inequalities between groups or households.

In summary, Professor Pike said: “We are very excited about these results. They show that cattle herding intensified to the extent that local grazing had reached capacity and cattle needed to be taken further afield. Not all households would have had access to the best grazing, so the increasing importance of cattle may have increased the socioeconomic differentiation in the community. This is something that is more widely visible later, during the European Bronze Age, with the tradition of burying the dead with status items – so it is particularly interesting to be able to see something similar in an earlier period.”