Watch the salamander’s hip-twist jump in Anthony Hessel’s video above. 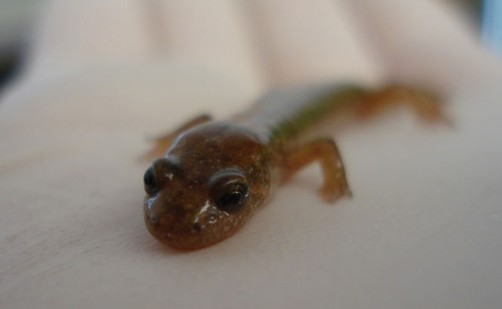 This little amphibian’s method of escape takes layers of physics and engineering to explain.

Newswise — A small, secretive creature with unlikely qualifications for defying gravity may hold the answer to an entirely new way of getting off the ground.

Salamanders—or at least several species of the Plethodontidae family—can do something humans would like to know a lot more about.

“This particular jump is unique in the world,” said graduate researcher Anthony Hessel. “That’s why I think a lot of people are finding this very interesting.”

The Northern Arizona University student calls the move a “hip-twist jump” that powers a “flat catapult,” describing the biomechanics in language the public can access. But the work has caught the attention of a highly technical crowd.

Hessel, who studies muscle physiology and biomechanics, recalled the moment he fully grasped the reach of his findings. An email from a premier journal reached him over the holiday break with the subject line “Science is interested in your work.” The contact arose from his presentation at the Society for Integrative and Comparative Biology symposium. There will likely be more who are interested.

“It’s a new way to get vertical lift for animals,” Hessel said. “Something that is flat on the ground, that is not pushing directly down on the ground, can still get up in the air. I’d say that hundreds of engineers will now toy with the idea and figure out what cool things can be built from it.”

Hessel used high-speed film, a home-built cantilever beam apparatus, some well-established engineering equations and biomechanical analysis to produce the details of how a slippery little amphibian with short legs can propel itself six to 10 times its body length into the air.

The key is that the salamander’s legs don’t provide the push that most creatures would require.

In describing the movement frame-by-frame from the high-speed film, Hessel said the salamander bends its body, then rapidly pushes that bend—a “C” shape, down through the torso—and this movement can “create a lot of elastic energy.”

“One of the interesting things about the salamander is that the mechanism moves the center of mass in a way that allows this really inefficient-looking mechanism to have a lot of efficiency,” Hessel said.

The next stage of the research is “getting down to the structures of the stiffness properties,” Hessel said. “When you see that there’s more power in the jump that can come from the muscles, then you know there are other places where you have to look, like stored elastic energy, connective tissue stretching and bones moving.”

One of those factors may be the protein titin, an active loader mechanism that is the focus of research by Hessel’s mentor, Regents’ Professor Kiisa Nishikawa. Her interdisciplinary lab group has provided valuable input throughout the project, Hessel said.

For now, the student from Long Island, N.Y., will write and publish his findings to complete his master’s degree, with plans to pursue a doctorate at NAU. Although the salamanders he brought with him from Allegheny College, his undergraduate institution, are not making a return trip to Pennsylvania, the same species is being studied at a lab there to continue the research, which Hessel will oversee himself this summer.