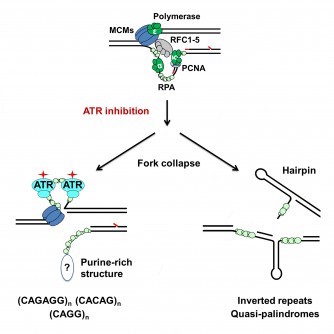 ATR inhibition as a means to identify genomic sites of problematic DNA replication in mouse and human cells.

Newswise — PHILADELPHIA –A twist on the molecular mechanism of how a new cancer drug works could aid in better identifying the best treatments for patients for an array of cancers. The finding is described in Molecular Cell in a study led by Eric J. Brown, PhD, an associate professor of Cancer Biology in the Perelman School of Medicine at the University of Pennsylvania.

Using mouse and human cells, Brown’s team, including co-first authors Nishita Shastri and Yu-Chen Tsai, identified over 500 sites in DNA that require an enzyme called ATR checkpoint kinase to not break when they are replicated. These sites are characterized by stretches of repeating DNA building blocks, which impede the normal replication of DNA. The harmful impact of these “genomic potholes” are lessened when the ATR kinase goes to work as a virtual “shock absorber” to smooth over the bumpy parts of replication. Importantly, inhibitors of ATR cause DNA to break, which is key to the anti-cancer effects of this drug.

ATR and PARP enzymes are part of the DNA Damage Response (DDR), which is used by cancer cells to survive high levels of replication stress and defects in DNA repair. Because cancers rely on the DDR for survival, stopping this process with ATR inhibitors is more toxic to cancer cells than normal cells. As such, DDR drugs such as ATR and PARP inhibitors may be more effective than standard therapies.

“Customized clinical use of DDR inhibitors is frequently based on changes in the level or function of specific proteins in cancer cells and this approach aims to improve treatment efficacy,” Brown said. “However, it is possible that the effects of ATR inhibitors may not be solely based on lethal interactions with defective gene expression in cancer cells, but also on the state of the repetitive DNA that relies on the ATR enzyme for stability.”

“While it is too early to tell exactly how detecting specific DNA sequences that break due to ATR inhibition will be applied in the clinic, the idea that the genome itself, not just the proteins expressed from it, might influence responses to treatment is a novel concept worthy of exploration,” Brown said.

The Penn team plans to monitor these sites of repetitive DNA as part of the ATR inhibitor combination clinical trial, which seeks to identify biomarkers that will maximize treatment efficacy.