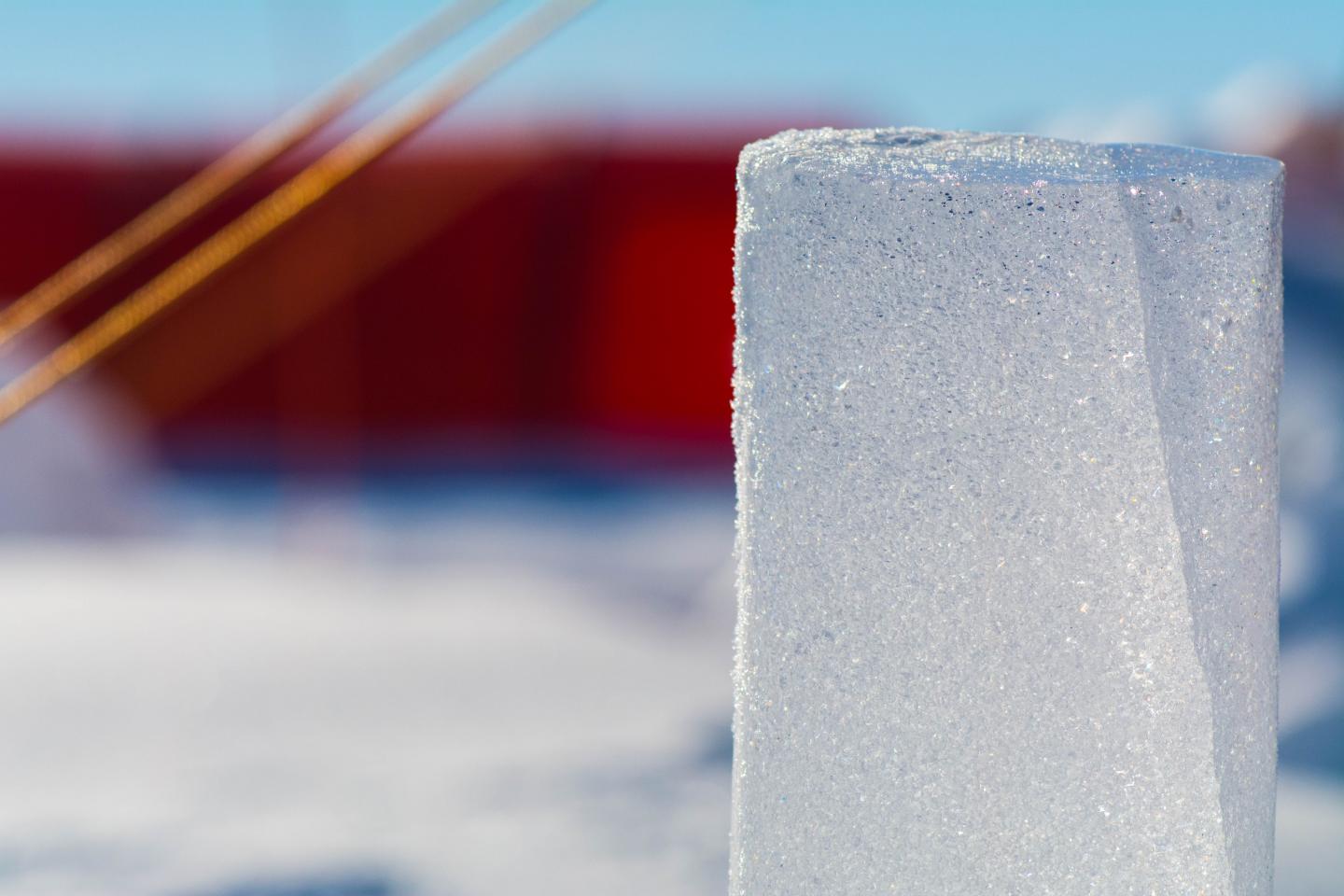 Fine layers of ancient volcanic ash in the ice helped the team pinpoint when the mass melting took place.

Newswise — Mass melting of the West Antarctic Ice Sheet was a major cause of high sea levels during a period known as the Last Interglacial (129,000-116,000 years ago), an international team of scientists led by UNSW's Chris Turney has found. The research was published today in Proceedings of the National Academy of Sciences (PNAS).   The extreme ice loss caused a multi-metre rise in global mean sea levels - and it took less than 2°C of ocean warming for it to occur.

"Not only did we lose a lot of the West Antarctic Ice Sheet, but this happened very early during the Last Interglacial," says Chris Turney, Professor in Earth and Climate Science at UNSW Sydney and lead author of the study.

Fine layers of ancient volcanic ash in the ice helped the team pinpoint when the mass melting took place. Alarmingly, the results indicated that most ice loss occurred within the first millennia, showing how sensitive the Antarctic is to higher temperatures.

"The melting was likely caused by less than 2°C ocean warming - and that's something that has major implications for the future, given the ocean temperature increase and West Antarctic melting that's happening today," Professor Turney says.

During the Last Interglacial, polar ocean temperatures were likely less than 2°C warmer than today, making it a useful period to study how future global warming might affect ice dynamics and sea levels.

"This study shows that we would lose most of the West Antarctic Ice Sheet in a warmer world," says Professor Turney.

In contrast to the East Antarctic Ice Sheet - which mostly sits on high ground - the West Antarctic sheet rests on the seabed. It's fringed by large areas of floating ice, called ice shelves, that protect the central part of the sheet.

As warmer ocean water travels into cavities beneath the ice shelves, ice melts from below, thinning the shelves and making the central ice sheet highly vulnerable to warming ocean temperatures.

Going back in time

To undertake their research, Professor Turney and his team travelled to the Patriot Hills Blue Ice Area, a site located at the periphery of the West Antarctic Ice Sheet, with support from Antarctic Logistics and Expeditions (or ALE).

Blue ice areas are the perfect laboratory for scientists due to their unique topography - they are created by fierce, high-density katabatic winds. When these winds blow over mountains, they remove the top layer of snow and erode the exposed ice. As the ice is removed, ancient ice flows up to the surface, offering an insight into the ice sheet's history.

While most Antarctic researchers drill down into the ice core to extract their samples, this team used a different method - horizontal ice core analysis.

"Instead of drilling kilometres into the ice, we can simply walk across a blue ice area and travel back through millennia. By taking samples of ice from the surface we are able to reconstruct what happened to this precious environment in the past," Professor Turney says.

Through isotope measurements, the team discovered a gap in the ice sheet record immediately prior to the Last Interglacial. This period of missing ice coincides with the extreme sea level increase, suggesting rapid ice loss from the West Antarctic Ice Sheet. The volcanic ash, trace gas samples and ancient DNA from bacteria trapped in the ice all support this finding.

Learning from the Last Interglacial

Ice age cycles occur approximately every 100,000 years due to subtle changes in Earth's orbit around the Sun. These ice ages are separated by warm interglacial periods. The Last Interglacial is the most recent warm period to our current interglacial period, the Holocene.

While human contribution to global warming makes the Holocene unique, the Last Interglacial remains a useful research point to understand how the planet responds to extreme change.

"The future is heading far beyond the range of anything we've seen observed in the scientific instrumental record of the last 150 years," says Professor Turney. "We have to look further into the past if we're going to manage future changes."

During the Last Interglacial, global mean sea levels were between 6m and 9m higher than present day, although some scientists suspect this could have reached 11m.

The sea level rise in the Last Interglacial can't be fully explained by the Greenland Ice Sheet melt, which accounted for a 2m increase, or ocean expansion from warmer temperatures and melting mountain glaciers, which are thought to have caused less than a 1m increase.

"We now have some of the first major evidence that West Antarctica melted and drove a large part of this sea level rise," says Professor Turney.

The severity of the ice loss suggests that the West Antarctic Ice Sheet is highly sensitive to future ocean warming.

"The West Antarctic Ice Sheet is sitting in water, and today this water is getting warmer and warmer," says Professor Turney, who is also a Chief Investigator of the ARC Centre of Excellence for Australian Biodiversity and Heritage (CABAH).

Using data gained from their fieldwork, the team ran model simulations to investigate how warming might affect the floating ice shelves. These shelves currently buttress the ice sheets and help slow the flow of ice off the continent.

The results suggest a 3.8m sea level rise during the first thousand years of a 2°C warmer ocean. Most of the modelled sea level rise occurred after the loss of the ice shelves, which collapsed within the first two hundred years of higher temperatures.

"As it reaches the tipping point, only a small increase in temperature could trigger abrupt ice sheet melt and a multi-metre rise in global sea level."

At present, the consensus of the Intergovernmental Panel on Climate Change (IPCC) 2013 report suggests that global sea level will rise between 40cm and 80cm over the next century, with Antarctica only contributing around 5cm of this.

The researchers are concerned that Antarctica's contribution could be much greater than this.

"Recent projections suggest that the Antarctic contribution may be up to ten times higher than the IPCC forecast, which is deeply worrying," says Professor Christopher Fogwill, co-author and Director of The Institute for Sustainable Futures at the UK University of Keele.

"Our study highlights that the Antarctic Ice Sheet may lie close to a tipping point, which once passed may commit us to rapid sea level rise for millennia to come. This underlines the urgent need to reduce and control greenhouse gas emissions that are driving warming today."

Notably, the researchers warn that this tipping point may be closer than we think.

"Our findings show that we don't want to get close to 2°C warming."

Professor Turney and his team hope to expand the research to confirm just how quickly the West Antarctic Ice Sheet responded to warming and which areas were first affected.

"We only tested one location, so we don't know whether it was the first sector of Antarctica that melted, or whether it melted relatively late. How these changes in Antarctica impacted the rest of the world remains a huge unknown as the planet warms into the future" he says.

"Testing other locations will give us a better idea for the areas we really need to monitor as the planet continues to warm."