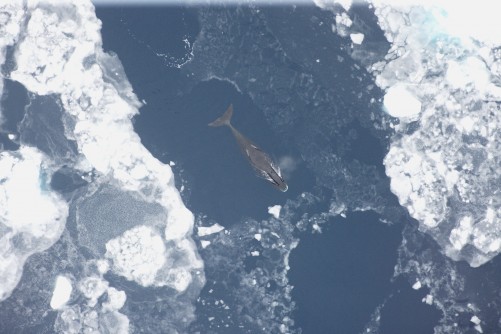 A newly published study by the Wildlife Conservation Society, the American Museum of Natural History, and other groups represents the first range-wide genetic analysis, using both modern-day tissue samples and historical artifacts of the bowhead whale, a species at home among the ice floes of the Arctic. This individual was photographed off Point Barrow, Alaska.

Newswise — NEW YORK (October 18, 2012)—Scientists from the Wildlife Conservation Society, the American Museum of Natural History, City University of New York, and other organizations have published the first range-wide genetic analysis of the bowhead whale using hundreds of samples from both modern populations and archaeological sites used by indigenous Arctic hunters thousands of years ago.

In addition to using DNA samples collected from whales over the past 20 years, the team collected genetic samples from ancient specimens —extracted from old vessels, toys, and housing material made from baleen—preserved in pre-European settlements in the Canadian Arctic. The study attempts to shed light on the impacts of sea ice and commercial whaling on this threatened but now recovering species. The study appears in the most recent edition of Ecology and Evolution.

“Our study represents the first genetic analysis of bowheads across their entire range,” said Elizabeth Alter, the study’s lead author and now a professor at City University of New York. “The study also illustrates the value of ancient DNA in answering questions about the impact of changing climate and human exploitation on genetic diversity in bowhead whales.”

Specifically, the study authors examined mitochondrial DNA from whales from all four or five putative populations—the Canada-Greenland population (sometimes designated as two separate populations, the Baffin Bay-Davis Strait and Hudson Bay-Foxe Basin populations), Bering-Beaufort-Chuckchi Seas, the Okhotsk, and the Spitsbergen populations—for the purpose of gauging gene flow between those groups.

The team also used DNA gathered from relics found at the now-abandoned settlements of the Thule people (the likely ancestors of the Inuit) on Somerset Island on the western side of Prince Regent Inlet. The site was inhabited between 500-800 years before the present. Existing data from older DNA samples from Spitsbergen (some 3,000 years in age) samples were also used in the analysis.

The ancient samples from Prince Regent Inlet were brought to the lab at AMNH’s Sackler Institute for Comparative Genomics, where researchers isolated and amplified segments of mitochondrial DNA, which is passed on exclusively through the maternal lines of a population.

The genetic analysis revealed differences found between ancient and modern population diversity, including the recent disappearance of unique maternal lineages over the past 500 years, the possible result of habitat loss during the Little Ice Age (a period of climatic cooling that occurred between the 16th to 19th Centuries) and/or extensive whaling in the region.

Another finding of the study: the frozen—and seemingly impassable—inlets and straits separating Atlantic and Pacific populations appear to be little obstacle to the ice-savvy and morphologically adapted bowheads. The team found the whale populations in both regions to be so related that individual whales must able to make the journey across the Arctic, although the finer details on the directions whales traveled in are still uncertain.

“The assumption that Arctic sea ice has separated bowhead whale populations over the past several thousand years is contradicted by the genetic analysis, which indicates that significant migration between Atlantic and Pacific populations has recently taken place,” said Dr. Howard Rosenbaum, Director of WCS’s Ocean Giants Program and senior author on the study. “The finding reveals much about the abilities of bowheads to find navigable routes through sea ice and helps illuminate hidden connections between populations.”

The authors point out that understanding the effects of shifting sea ice conditions and commercial whaling are important for future management decisions for the bowhead whale, particularly in light of the disappearance of sea ice due to climate change, maritime tourism, and increased shipping in the Arctic environment.

Reaching up to 65 feet in length and up to 100 tons in weight, the bowhead whale is a baleen whale that lives in Arctic and sub-Arctic waters. The bowhead gets its name from its enormous arched head, which it occasionally uses to break through ice up to 60 centimeters thick in order to breathe. The species widely hunted for centuries by commercial whalers, who prized the species for its long baleen (used in corsets and other items) and its thick blubber (the thickest of any species of whale). The bowhead whale may also be among the most long-lived mammal species. In 2007, aboriginal whalers on the Alaskan coast landed a whale carrying a valuable clue about the animal’s probable age. The whalers discovered a harpoon point manufactured in the 1890s embedded in the whale’s blubber, indicating the animal may have survived an encounter with whalers more than one hundred years ago.

The bowhead whale has been protected from commercial whaling by the International Whaling Commission since 1946. Currently, limited subsistence whaling by coastal communities on the Bering, Beaufort, and Chuckchi Seas is permitted by the IWC. Bowheads are listed on Appendix I of CITES (Convention on International Trade in Endangered Species), a listing that completely prohibits international trade. The Okhotsk Sea and Spitsbergen populations are listed on the IUCN Red List of Threatened Species as “Endangered” and “Critically Endangered” respectively, while the other populations are designated as “Least Concern.” The authors include: Elizabeth Alter of the City University of New York; Howard C. Rosenbaum of the Wildlife Conservation Society and the American Museum of Natural History; Lianne Postma, Melissa Lindsay, and Larry Dueck of Fisheries and Oceans Canada; Peter Whitridge of the Memorial University of Newfoundland; Cork Gaines, Diana Weber, Mary Egan, and George Amato of the American Museum of Natural History’s Sackler Institute for Comparative Genomics; Robert Brownell Jr. and Brittany Hancock of the Southwest Fisheries Science Center (National Marine Fisheries Service/National Oceanic and Atmospheric Administration); Mads Peter Heide-Jørgensen and Kristin Laidre of the Greenland Institute of Natural Resources; and Gisella Caccone of Yale University.

In addition to novel bowhead whale genetic research, WCS is working to advance conservation initiatives for Arctic marine mammals in general. Through its Ocean Giants Program and Arctic Beringia Program—a transboundary initiative that works closely with scientists, government agencies, indigenous groups and others from North America and the Russian Federation, —WCS is working to strengthen Arctic research and governance efforts, while evaluating the potential impacts of disappearing sea ice and increased anthropogenic activities, such as shipping, on whales, walrus, and other marine wildlife, as well as the indigenous communities that have lived in the region for millennia.

The Wildlife Conservation Society saves wildlife and wild places worldwide. We do so through science, global conservation, education and the management of the world's largest system of urban wildlife parks, led by the flagship Bronx Zoo. Together these activities change attitudes towards nature and help people imagine wildlife and humans living in harmony. WCS is committed to this mission because it is essential to the integrity of life on Earth. Visit www.wcs.org.