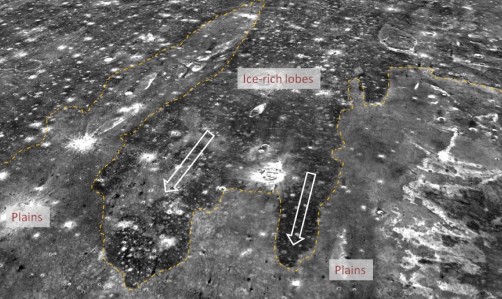 Thermal image showing ice-rich lobes (outlined by yellow line), which we interpret to be the remnants of tsunami waves that transitioned into slurry ice-rich flows as they propagated under extremely cold climatic conditions. Upslope direction of flow indicated by white arrow. The lobe is about 250 km in length, or the distance between Baltimore and New York City. This view was produced using Google Earth. 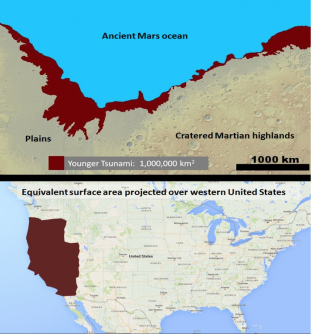 Above: View of ancient Mars ocean with a paleo-shoreline reconstructed at -4100 m of elevation, and surface areas as well as inundation distances of the younger of the two documented tsunami events. Below: Equivalent tsunami area on Earth includes the entire states of California, Nevada, and Washington.

Newswise — ITHACA, N.Y. – The geologic shape of what were once shorelines through Mars’ northern plains convinces scientists that two large meteorites – hitting the planet millions of years apart – triggered a pair of mega-tsunamis. These gigantic waves forever scarred the Martian landscape and yielded evidence of cold, salty oceans conducive to sustaining life.

“About 3.4 billion years ago, a big meteorite impact triggered the first tsunami wave. This wave was composed of liquid water. It formed widespread backwash channels to carry the water back to the ocean,” said Alberto Fairén, Cornell visiting scientist in astronomy and principal investigator at the Center of Astrobiology, Madrid.

Fairén, who with lead author Alexis Rodriguez of the Planetary Science Institute and 12 others, published their work in Scientific Reports (May 19), a publication of the journal Nature.

The scientists found evidence for another big meteorite impact, which triggered a second tsunami wave. In the millions of years between the two meteorite impacts and their associated mega-tsunamis, Mars went through frigid climate change, where water turned to ice, Fairén said: “The ocean level receded from its original shoreline to form a secondary shoreline, because the climate had become significantly colder.”

The second tsunami formed rounded lobes of ice. “These lobes froze on the land as they reached their maximum extent and the ice never went back to the ocean – which implies the ocean was at least partially frozen at that time,” he said. “Our paper provides very solid evidence for the existence of very cold oceans on early Mars. It is difficult to imagine Californian beaches on ancient Mars, but try to picture the Great Lakes on a particularly cold and long winter, and that could be a more accurate image of water forming seas and oceans on ancient Mars.”

These icy lobes retained their well-defined boundaries and their flow-related shapes, Fairén said, suggesting the frozen ancient ocean was briny. “Cold, salty waters may offer a refuge for life in extreme environments, as the salts could help keep the water liquid. … If life existed on Mars, these icy tsunami lobes are very good candidates to search for biosignatures,” he said.

“We have already identified some areas inundated by the tsunamis where the ponded water appears to have emplaced lacustrine sediments, including evaporites,” Rodriguez said. “As a follow-up investigation we plan to characterize these terrains and assess their potential for future robotic or human in-situ exploration.”

The research, “Tsunami Waves Extensively Resurfaced the Shorelines of an Early Martian Ocean,” was funded by NASA. Fairén was supported by the European Research Council.