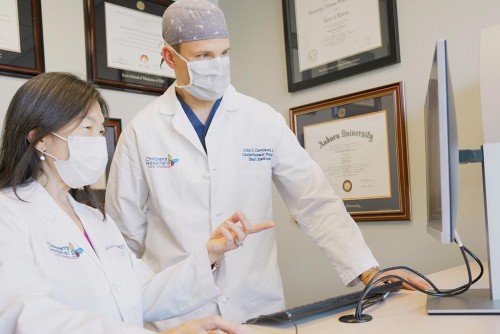 Newswise — Anomalous aortic origin of the coronary artery is a rare congenital heart defect that has drawn increased attention in recent years. That attention comes for good reason: The condition can sometimes lead to sudden cardiac arrest, particularly in adolescents and young adults.

But while more frequent use of echocardiograms has helped to uncover anomalous coronaries in more patients, much is still unknown about when the condition is life-threatening—and when it’s benign. That can create a dilemma for both physicians and families about what to do after a diagnosis.

“As we’re learning more about this condition, we have to figure out what to do with that knowledge,” says John David Cleveland, MD, a cardiothoracic surgeon at Children’s Hospital Los Angeles. “It’s difficult to predict how many of these children will later develop problems associated with their anomalous coronary. And surgery to fix the defect carries its own risks, which are not negligible.”

“Each patient is different and should be treated individually,” Dr. Kung says. “But we’re trying to create a more solidified approach that can help cardiologists approach care for patients and more effectively counsel families.”

The team’s main goal is to risk-stratify patients. Which ones are high-risk and need surgery? Which patients can be monitored without treatment?

Those answers depend in part on the type and location of the anomaly. Normally, both the right and left coronaries arise from the aorta in very distinct and separate locations. When one of the arteries is connected to the aorta from a different location, it can create risks for a child’s heart.

“An anomalous coronary artery can be at risk for being compressed by the surrounding structures,” Dr. Cleveland explains. “Or, it can make the aortic orifice very abnormally shaped, which limits the amount of blood that can go through it to the heart. That limited blood flow is what ultimately places patients at risk for sudden cardiac death.”

When the left coronary artery arises from the same place on the aorta as the right coronary, there is near-universal agreement in the field that surgery is needed.

Patients who have symptoms—such as chest pain or syncope (fainting) during exercise—and have a right coronary coming off the left artery location are also usually recommended for surgery, although this is a somewhat grayer area.

The more difficult decisions come when patients have no symptoms, especially if the right coronary arises from the same place as the left one. That anomaly is generally considered lower-risk, although that is also not certain.

“Most of the children we see don’t have any symptoms, and the condition is found incidentally on an echocardiogram,” Dr. Kung says. “That’s where there’s more question about what to do. Should we just watch the patient and wait? Because it’s not clear if surgery actually changes the long-term outcome.”

Surgery to address coronary anomalies typically involves an “unroofing” procedure, which opens up the wall between the coronary and aorta, allowing more blood to flow through.

Risk factors the team looks for include:

An initial CT scan is best to confirm the anatomy and risk factors. State-of-the-art scanners at Children’s Hospital Los Angeles are able to define the anatomy even in small children.

Due to the low incidence of sudden cardiac death in young children, the team does not recommend CT scans for children younger than 9, unless they have symptoms. Once the anatomy has been defined, physicians can use cardiac MRI for follow-up imaging to avoid radiation, Dr. Kung says.

The group also plans to develop a patient database that can help foster future research and improvements in care for these children.

Dr. Kung adds that while the algorithm will serve as a guide for physicians, it’s important that care be individualized to each patient.

“We’re trying to guide cardiologists, at least in those initial stages after diagnosis,” she says. “But it also comes down to a very careful discussion with the family. It’s very important that we help families understand the risks and benefits of every option, so we can all make the best decision for each child.”

Learn more about the Heart Institute.