Newswise — Women suffering from anorexia or bulimia draw themselves with prominently different characteristics than women who do not have eating disorders and who are considered of normal weight. This has been revealed in a new joint study from the University of Haifa, Soroka University Medical Center and Achva Academic College, Israel, published in The Arts in Psychotherapy. "The results of this study show that women suffering or prone to developing eating disorders, such as anorexia and bulimia, can be diagnosed with a simple and non-intrusive self-figure drawing assessment," explained Prof. Rachel Lev-Wiesel, Head of the Graduate School of Creative Art Therapies at the university of Haifa and a co-author of the study.

The research, conducted by Prof. Lev-Wiesel alongside Dr. Jonathan Guez, Shimrit Valetsky, Dr. Diego Kruszewski Sztul and Dr. Bat-Sheva Pener, examined 76 women, 36 of whom had been diagnosed as anorexic or bulimic; 20 had no eating disorders but were overweight, and 20 had no eating disorders and were considered normal weight. Each of the participants completed two standardized questionnaires for screening eating disorders and were then asked to draw themselves. Besides being asked to draw themselves, no guidelines or limitations were set for the drawing.

The research team then evaluated the drawings and found various differences between the groups in four aspects: - The neck: women suffering from anorexia or bulimia tended to draw a larger neck, a disconnected neck or no neck at all;- The mouth: this feature was more emphasized in drawings by women suffering from anorexia or bulimia;- The thighs: women with eating disorders drew wider thighs than the other groups in the study;- The feet: women with eating disorders tended to draw pictures without feet or with disconnected feet.

The study also revealed that self-figure drawings can differentiate between anorexic and bulimic women: those with anorexia tended to omit breasts from their drawings, drew less defined body lines and smaller figures relative to the page size.

In order to assess the reliability of the drawing test, the more pronounced results were compared with the two standardized eating disorders screening tests, and a very strong correlation was found between all the tests.

"Women suffering from eating disorders usually tend to hide their condition, even from their professional therapists. They often find it difficult to talk about their problem, so a non-verbal and non-intrusive tool such as a simple request for a self-figure drawing can become an important tool in creative art therapy," explained Prof. Lev-Wiesel. 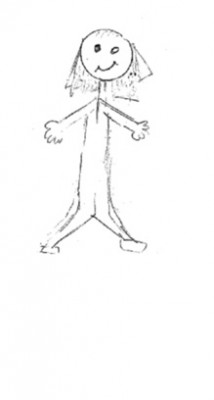 Caption: Drawing from the study, by a woman suffering from anorexia

Caption: Drawing from the study, by a woman with bulimia 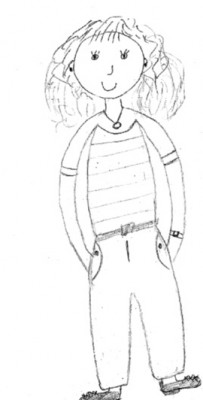 Caption: Drawing from the study by a normal weight participant

The Arts in Psychotherapy