Future teams of subterranean search and rescue robots may owe their success to the lowly fire ant, a much-despised insect whose painful bites and extensive networks of underground tunnels are all-too-familiar to people living in the southern United States. This video shows research on how fire ants build their nests and travel through them. 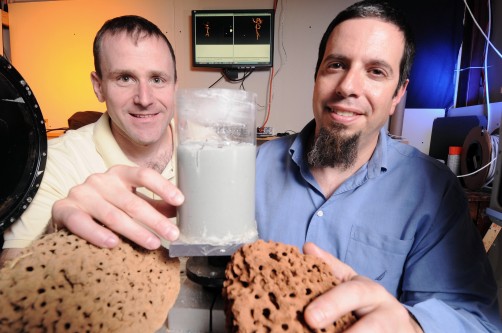 Georgia Tech researchers (l-r) Daniel Goldman and Michael Goodisman pose with a tube containing simulated soil used to study tunnels being made by fire ants. They are holding examples of nests made by the ants in the wild. The information could be useful in developing future generations of robots able to work in confined spaces. 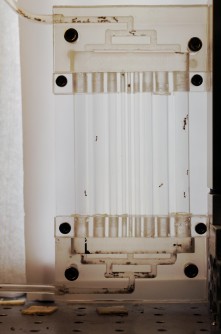 Fire ants move in a test chamber composed of glass tubes of varying sizes. The chamber is used to study how the creatures recover from falls caused by perturbing the chamber. The information could be useful in developing future generations of robots able to work in confined spaces. 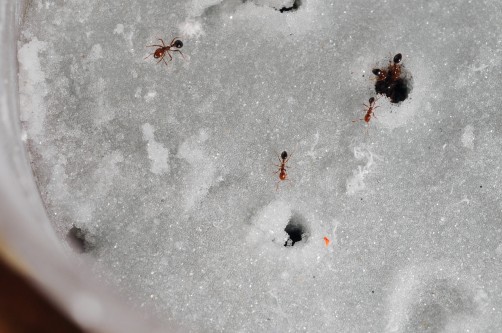 Fire ants build tunnels in simulated soil composed of glass spheres. Georgia Tech researchers used X-ray computed tomography to study the tunnels and chambers built by the ants. The information could be useful in developing future generations of robots able to work in confined spaces. 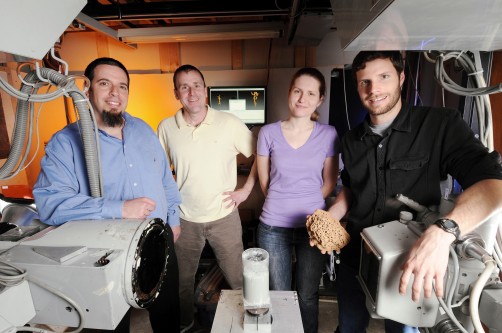 Georgia Tech researchers (l-r) Michael Goodisman, Daniel Goldman, Daria Monaenkova and Nick Gravish pose with X-ray equipment used to map the underground tunnels built by fire ants in a tube of simulated soil. The information could be useful in developing future generations of robots able to work in confined spaces. 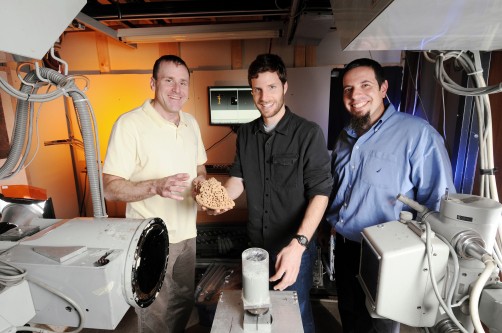 Proceedings of the National Academy of Sciences; National Science Foundation

Newswise — Future teams of subterranean search and rescue robots may owe their success to the lowly fire ant, a much-despised insect whose painful bites and extensive networks of underground tunnels are all-too-familiar to people living in the southern United States.

By studying fire ants in the laboratory using video tracking equipment and X-ray computed tomography, researchers have uncovered fundamental principles of locomotion that robot teams could one day use to travel quickly and easily through underground tunnels. Among the principles is building tunnel environments that assist in moving around by limiting slips and falls, and by reducing the need for complex neural processing.

Among the study’s surprises was the first observation that ants in confined spaces use their antennae for locomotion as well as for sensing the environment.

“Our hypothesis is that the ants are creating their environment in just the right way to allow them to move up and down rapidly with a minimal amount of neural control,” said Dan Goldman, an associate professor in the School of Physics at the Georgia Institute of Technology, and one of the paper’s co-authors. “The environment allows the ants to make missteps and not suffer for them. These ants can teach us some remarkably effective tricks for maneuvering in subterranean environments.”

The research was scheduled to be reported May 20 in the early online edition of the journal Proceedings of the National Academy of Sciences. The work was sponsored by the National Science Foundation’s Physics of Living Systems program.

In a series of studies carried out by graduate research assistant Nick Gravish, groups of fire ants (Solenopsis invicta) were placed into tubes of soil and allowed to dig tunnels for 20 hours. To simulate a range of environmental conditions, Gravish and postdoctoral fellow Daria Monaenkova varied the size of the soil particles from 50 microns on up to 600 microns, and also altered the moisture content from 1 to 20 percent.

While the particle size and moisture content did produce changes in the volume of tunnels produced and the depth that the ants dug, the diameters of the tunnels remained constant – and comparable to the length of the creatures’ own bodies: about 3.5 millimeters.

“Independent of whether the soil particles were as large as the animals’ heads or whether they were fine powder, or whether the soil was damp or contained very little moisture, the tunnel size was always the same within a tight range,” said Goldman. “The size of the tunnels appears to be a design principle used by the ants, something that they were controlling for.”

Gravish believes such a scaling effect allows the ants to make best use of their antennae, limbs and body to rapidly ascend and descend in the tunnels by interacting with the walls and limiting the range of possible missteps.

“In these subterranean environments where their leg motions are certainly hindered, we see that the speeds at which these ants can run are the same,” he said. “The tunnel size seems to have little, if any, effect on locomotion as defined by speed.”

The researchers used X-ray computed tomography to study tunnels the ants built in the test chambers, gathering 168 observations. They also used video tracking equipment to collect data on ants moving through tunnels made between two clear plates – much like “ant farms” sold for children – and through a maze of glass tubes of differing diameters.

The maze was mounted on an air piston which could periodically be fired, dropping the maze with a force of as much as 27 times that of gravity. The sudden movement caused about half of the ants in the tubes to lose their footing and begin to fall. That led to one of the study’s most surprising findings: the creatures used their antennae to help grab onto the tube walls as they fell.

“A lot of us who have studied social insects for a long time have never seen antennae used in that way,” said Michael Goodisman, a professor in the Georgia Tech School of Biology and one of the paper’s other co-authors. “It’s incredible that they catch themselves with their antennae. This is an adaptive behavior that we never would have expected.”

By analyzing ants falling in the glass tubes, the researchers determined that the tube diameter played a key role in whether the animals could arrest their fall.

In future studies, the researchers plan to explore how the ants excavate their tunnel networks, which involves moving massive amounts of soil. That soil is the source of the large mounds for which fire ants are known.

While the research focused on understanding the principles behind how ants move in confined spaces, the results could have implications for future teams of small robots.

“The problems that the ants face are the same kinds of problems that a digging robot working in a confined space would potentially face – the need for rapid movement, stability and safety – all with limited sensing and brain power,” said Goodisman. “If we want to build machines that dig, we can build in controls like these ants have.”

Why use fire ants for studying underground locomotion?

“These animals dig virtually non-stop, and they are good, repeatable study subjects,” Goodisman explained. “And they are very convenient for us to study. We can go outside the laboratory door and collect them virtually anywhere.”

The research described here has been sponsored by the National Science Foundation (NSF) under grant POLS 095765, and by the Burroughs Wellcome Fund. The findings and conclusions are those of the authors and do not necessarily represent the official views of the NSF.