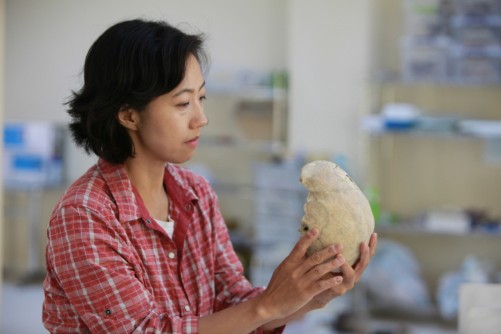 A new book by UC Riverside paleoanthropologist Sang-Hee Lee about human evolution is a best seller in South Korea.

Newswise — RIVERSIDE, Calif. – Anyone who has ever wondered how humans became meat eaters, why so many adults are lactose-intolerant, or the physiological impacts of walking upright will find intriguing answers in a new book by University of California, Riverside paleoanthropologist Sang-Hee Lee.

But you will have to wait a while for the English translation.

Written in Korean, “Human Origins” (ScienceBooks, Seoul, Korea) has captivated a broad spectrum of readers in South Korea and turned Lee into something of celebrity. Published in September 2015, “Human Origins” was named Science Book of the Year by SisaIN, an influential Korean media outlet, and has been on the respected Kyobo Bookstore’s Best Seller list since publication.

Although not written as a textbook, two Korean universities have adopted “Human Origins” for anthropology courses, an elementary school made it required reading for all sixth-graders, and mothers have brought their daughters to public lectures to meet and be photographed with Lee.

All of which has caught the UCR associate professor of anthropology by surprise.

“The response has been very rewarding,” Lee said. “For any of my published research papers, maybe 10 people will read them. With ‘Human Origins,’ people are writing about it on their blogs, and people coming to my talks have said it changed the way they look at life.”

Now in its fourth printing with nearly 10,000 copies sold – an enormous amount for a science book in South Korea – the 352-page book is a collection of 22 essays Lee wrote about human evolution for a leading science magazine in Korea over a two-year period. Lee shared co-authorship of the book with the magazine’s award-winning editor, Shin-Young Yoon, who edited her essays to appeal to a general audience. Discussions have begun with publishers in Japan and Taiwan to translate it for publication there.

“Human Origins” is the first book about human evolution written in Korean by a Korean scholar, and is especially significant in a nation where few women study science. Lee earned a bachelor’s degree in archaeology from Seoul National University, and master’s and Ph.D. degrees in anthropology from the University of Michigan.

Her book discusses human evolutionary history, but from the perspective of curious lay readers. Each chapter focuses on a question such as: Were there cannibals among primitive people? Why do we have fathers? What is the price of having a big brain? How did we become meat eaters? Did farming make us prosperous? Why do so many humans become lactose-intolerant in adulthood? Where is the original Peking Man?

One chapter, for example, examines the consequences of bipedalism. When human ancestors began walking upright, the narrow hips that made it easy to walk on two feet became a problem when giving birth to big-headed babies and contribute today to lower back pain.

“The heart also has to pump harder to get blood to the brain, so the heart is overworked,” Lee explained. “Bipedalism freed our hands and our diaphragm from being involved in locomotion. It made it possible for us to talk. Was it worth it?”

Before addressing the science of each topic, Lee begins with stories from her own experiences. For example, the chapter about the Peking Man – an example of Homo erectus found near Beijing in the early 20th century – begins with the disappearance of fossilized remains during World War II. Were they taken by the CIA? The Chinese government? The Yakuza crime syndicate?

Lee recounts an invitation from a journalist in Japan, where she was a postdoctoral fellow, to join him in secretly observing a Yakuza initiation rite to authenticate what were rumored to be the missing remains.

“I wrote back and said I would go, thinking how great it would be if I were the one who could say, ‘This is Peking Man,’” she recalled. “I told my advisor and he said, ‘Are you crazy? If they catch you they will chop off your fingers.’” She declined the invitation.

“The impact of this book was completely unexpected,” Lee said, noting that even theologically conservative Christians who professed their belief in creationism have told her that “Human Origins” has expanded their view of a God of limitless power.

“Human evolution as a science field is ever-changing. There is no one answer that stays the same,” Lee said. “We came here not because we were predestined to be who we are, but because we did the best with what we had at that time and adapted.”