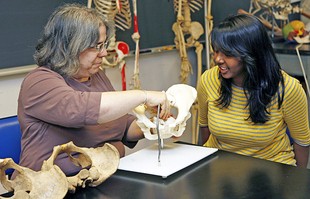 Newswise — Contrary to the TV sitcom where the wife experiencing strong labor pains screams at her husband to stay away from her, women rarely give birth alone. There are typically doctors, nurses and husbands in hospital delivery rooms, and sometimes even other relatives and friends. Midwives often are called on to help with births at home.

Assisted birth has likely been around for millennia, possibly dating as far back as 5 million years ago when our ancestors first began walking upright, according to University of Delaware paleoanthropologist Karen Rosenberg.

She says that social assistance during childbirth is just one aspect of our evolutionary heritage that makes us distinctive as humans.

Rosenberg, who is a professor and chairperson of the Department of Anthropology at the University of Delaware, presented a talk on natural selection and childbirth on Feb. 13 at the annual meeting of the American Association for the Advancement of Science in Chicago. It was part of the symposium "The Invisible Woman in Evolution: Natural Cycle and Life-Cycle Events," which Rosenberg co-organized.

The meeting's theme, "Our Planet and Its Life: Origins and Futures," commemorated the 200th anniversary of Charles Darwin's birth and the 150th anniversary of the publication of his book On the Origin of Species by Means of Natural Selection.

"Humans need helpers in childbirth because it is difficult and potentially dangerous," Rosenberg says. "While it's not so risky today -- maternal mortality is low -- as recently as two generations ago, it was not uncommon to hear of women dying in childbirth."

Through fossil records and comparisons of humans with other primates, Rosenberg says that anthropologists can now show how the uniquely human traits of bipedalism, large brains, infant helplessness and social assistance all came together, resulting in the challenging and somewhat dangerous manner in which humans give birth.

When our ancestors evolved to begin walking on two legs, Rosenberg says, this upright posture created a wide but short opening in the pelvis in which the baby must travel, requiring a new form of birth so that the baby could find its way through a now tight birth canal.

"Until recently, there was a sexism in the study of evolution," Rosenberg says. "Researchers focused on men and the tools they used in hunting, and these things were more difficult to connect to reproductive success and hence to natural selection," she notes.

"With childbirth, as well as many of the other things that happen to women -- pregnancy, nursing, menopause -- it's really easy to see how natural selection works," Rosenberg notes.

Childbirth is just one of a series of examples throughout a woman's life cycle, in which enlisting the help of other women significantly improves reproductive outcomes, according to Rosenberg.

"Women take up the slack for other women when they are pregnant and nursing so that they have the energy to devote to their infants. Cooperative childcare is something in which women help each other out. Often, but not always, these helpers are post-reproductive women who have fewer of those responsibilities of their own, but may be helping out their daughters. All of this puts a great selective premium on a kind of social intelligence that many scientists think partly accounts for the increase in brain size that happened over the last two million years," she notes.

How will women and childbirth continue to evolve? Will the birth canal grow narrower, or wider? Will childbirth become more painful, or easier? Will more helpers be needed in future births? It's really anybody's guess.

"Evolution doesn't have a direction," Rosenberg says. "Knowing where we've been doesn't give us any help in where we're going. But it does help us understand what makes us human, as well as how we're connected to the natural world. "

She says she began focusing on the evolution of women and childbirth around the time she had her first child, although she doesn't think there was a connection between the two.

Ironically, her brother is an obstetrician although she and he have never conducted research together.