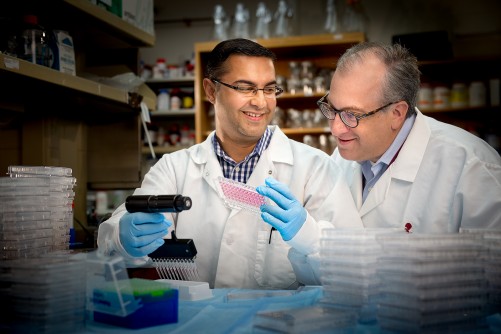 Newswise — St. Jude Children’s Research Hospital scientists have evidence that an anti-malaria drug sensitizes a high-risk subtype of acute lymphoblastic leukemia (ALL) to treatment with a promising class of targeted drugs, raising hopes for more effective therapy. The findings appeared online this week in the journal Clinical Cancer Research.

The study focused on the ALL subtype BCR-ABL—positive ALL, also known as Philadelphia chromosome—positive ALL. BCR-ABL+ ALL has proven resistant to targeted therapies that have revolutionized treatment of other leukemias.

In this study, researchers showed not only that the widely used anti-malaria drug dihydroartemisinin, or DHA, sensitized BCR-ABL-positive ALL to the investigational drug ABT-263, marketed as Navitoclax, but how that happened.

“Survival rates for children and adults with this leukemia still lag, highlighting the urgent need for new therapies,” said Joseph Opferman, Ph.D., an associate member of the St. Jude Department of Cell and Molecular Biology, who led the research. “Our findings suggest that combining DHA with ABT-263 can significantly improve treatment response.”

The scientists determined that DHA worked by repressing production of a protein that promotes survival of a wide variety of normal and cancer cells. The protein, MCL-1, is elevated in many cancers and helps malignant cells resist a new class of drugs called BH3-mimetics that work by triggering programmed cell death via apoptosis.

“MCL-1 is widely recognized as an important survival molecule in many normal cell types as well as cancer,” Opferman said. “MCL-1 inhibitors are in development, but none are currently available for treating patients. And because MCL-1 is essential for proper functioning of many normal cell types, there is concern about potential toxicity. We sought to identify drugs that are available now to augment treatment of BCR-ABL-positive ALL.”

ABT-263 belongs to a family of targeted therapies called BH3-mimetics. These drugs are designed to inhibit BCL-2; BCL-XL; and related proteins that, like MCL-1, promote cancer cell survival by blocking programmed cell death via apoptosis. But ABT-263 and other BH3-mimetics do not inhibit MCL-1.

The search for a drug to sensitize BCR-ABL+ ALL to ABT-263 and related compounds led Opferman and his colleagues to DHA. The drug is widely used to treat malaria, and a St. Jude drug screen showed DHA killed BCR-ABL+ ALL cells from mice.

Working in the laboratory, investigators in this study showed how DHA induced expression of a protein called CHOP that is a key regulator of the endoplasmic reticulum stress pathway in cells. CHOP expression triggered the stress pathway in BCR-ABL+ ALL cells from mice and led to suppression of MCL-1. “MCL-1 has a short half-life, so the cell’s MCL-1 stores are rapidly depleted if the protein’s translation is repressed,” said first author Amit Budhraja, Ph.D., a postdoctoral fellow in Opferman’s laboratory.

Now researchers are studying the mechanism in human BCR-ABL+ leukemic cells as well as in other cancers. “Identifying the mechanism will allow us to study the pathway in detail for other points to target for anti-cancer drug development,” Opferman said.

The research was funded in part by grants (HL102175, CA201069) from the National Institutes of Health, the American Cancer Society and ALSAC, the fundraising and awareness organization of St. Jude.