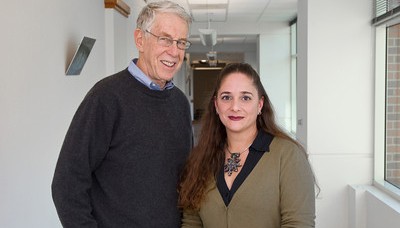 Newswise — The smoking cessation drug varenicline significantly reduced alcohol consumption in a group of heavy-drinking smokers, in a study carried out by researchers at the Ernest Gallo Clinic and Research Center at the University of California, San Francisco. “Alcohol abuse is a huge problem, and this is a big step forward in identifying a potential new treatment,” said senior author Howard L. Fields, MD, PhD, professor of neurology and director of the Wheeler Center for the Neurobiology of Addiction at UCSF. The study was published on May 1 in the journal Psychopharmacology. Study participants, who were seeking treatment for smoking and not for drinking, were randomly assigned to take either varenicline or a placebo. By the end of the study, participants assigned to varenicline had reduced their average number of drinks per week by 36 percent compared to those taking placebo. The scientists found no correlation between the average number of drinks consumed per week by each subject and the average number of cigarettes they smoked, indicating that varenicline’s effects on drinking behavior were separate from its effects on smoking. While they cautioned that additional study was needed to further examine potential side effects, the scientists said they are optimistic about the potential of varenicline as a treatment for heavy drinking. “The drug is already widely used by smokers to help them quit,” said Fields. “Many heavy drinkers also smoke, and this study indicated that, in this group, varenicline was effective in reducing both the number of cigarettes smoked and the number of drinks consumed.” Interestingly, in the study, varenicline did not change the number of times per week that subjects drank, said lead author Jennifer Mitchell, PhD, clinical project director at the Gallo Center and an adjunct assistant professor of neurology at UCSF. “People initiated drinking at the same rate, but they drank less once they started,” she said. “If your usual pattern was to come home and have a few beers, you would still do that, but you might have one or two instead of four or five.” A medication that reliably decreases alcohol consumption would be of immense value in reducing the harm caused by alcohol abuse, Mitchell said. “If you currently drink seven drinks a night, and we can turn that into two or three, then you’re not only drinking at a level that’s going to harm you less, you’re less likely to harm others, as well. If we could lower the rates of drunk driving, spousal and child abuse and other secondary effects of alcoholism, that would be tremendous.” They noted that the study corroborates earlier Gallo Center research indicating that alcohol and nicotine act through a common pathway in regions of the brain that provide a sense of pleasure and reward. Varenicline acts as a smoking cessation aid by blocking the pleasant effects of nicotine in the brain. Few unpleasant or serious side effects were reported, suggesting that the drug can be well tolerated, said Fields. However, the scientists cautioned that the absence of significant side effects might have occurred because subjects were rigorously screened for mental health disorders such as depression, anxiety and suicidal ideation, as well as alcoholism, before the study began. They recommended that the drug be tested for safety and effectiveness in populations with comorbid psychiatric conditions, as well as in treatment-seeking alcohol abusers who do not smoke. Varenicline is marketed by Pfizer Inc. under the brand name Chantix. The company donated the drug for the study, but did not fund or participate in any part of the research. The scientists have no conflicts of interest with the company. Co-authors are Candice H. Teague of the Gallo Center and Andrew S. Kayser, MD, and Selena E. Bartlett, PhD, of the Gallo Center and UCSF. The study was supported by funds from the National Institutes of Health and by funds provided by the State of California for medical research on alcohol and substance abuse through UCSF. The UCSF-affiliated Ernest Gallo Clinic and Research Center is one of the world’s preeminent academic centers for the study of the biological basis of alcohol and substance use disorders. Gallo Center discoveries of potential molecular targets for the development of therapeutic medications are extended through preclinical and proof-of-concept clinical studies. UCSF is a leading university dedicated to promoting health worldwide through advanced biomedical research, graduate-level education in the life sciences and health professions, and excellence in patient care.