Newswise — Bethesda, Md. – The ability to 3D print a variety of healthcare-related products in deployment zones would greatly benefit the nation’s warfighters.  A recent pilot program conducted by the Uniformed Services University of the Health Sciences (USU) in collaboration with the U.S. Military Academy at West Point has shown that a 3D printer capable of biofabrication could expedite repair or perhaps replace damaged tissues for troops injured on the battlefield, an advancement that could potentially change the way care is provided to the nation’s deployed warfighters.

The Fab AE initiative sought to demonstrate whether 3D printers could be taken into a forward-deployed desert environment to fabricate medical products in austere settings where resources may be limited. The ruggedized 3D printer was sent to the undisclosed desert location with basic supplies and human mesenchymal stem/stromal cells (hMSCs), the only cells that allow for same-day bioprinting.  On site, Army Lt. Col. Jason Barnhill, a faculty member of West Point and USU’s Department of Radiology, led the project.  Under his direction, the 3D printer was able to successfully fabricate a number of products, including a scalpel capable of immediate use and hemostat, a surgical tool used to control bleeding during surgery and capable of gripping objects, while locking them into place to hold tissue or other medical implements. The tools were made of material that could be sterilized on site, reducing the chance of infection during practical use. Barnhill was also able to develop bioactive bandages by printing a hydrogel layer of antibiotics over a structural layer, all within just five minutes. The bandages were designed to slowly release antibiotics into the wound, prolonging the suppression of bacteria for several days. The bacterial suppression and actual bandage design could also be tailored, using CT data, to alter the amount antibiotic concentration as needed.

Additionally, the 3D printer fabricated a surgical model of a T9 vertebrae, one of the lower thoracic spinal vertebrae that provides structural support for the spinal cord. Fractures of the lower thoracic spine may result in paraplegia, and/or loss of bowel/bladder control. The image for this surgical model was obtained from medical scans, and while it could not be implanted in a patient, it would be invaluable to on-site surgeons, helping them to visualize musculoskeletal injuries and determine the best course of surgical intervention. The 3D bioprinter was also able to produce a meniscus, cartilage in the knee that acts as a shock absorber. The image used to print the meniscus was sent as an electronic file from a stateside facility to the remote environment, and printed on location – the first demonstration of cyber manufacturing where complex designs were transmitted and produced in a remote location.

In parallel to this initiative, a 3D printer had previously been sent to the International Space Station where astronauts are currently running similar 3D printing experiments. The hope is to also send the printer aboard the Navy’s hospital ship, the USNS Mercy.

“We believe this program has the potential to reduce logistical challenges and costs for transporting medical supplies to austere environments, which could also be applied to our special operations forces in remote locations.  Instead of carrying tons of supplies, they could just print them using a, hopefully, more portable, light-weight version in the future that could fit in their pack,” said Dr. Vincent Ho, director of USU’s 4D Bio3, principal investigator for the FAB AE initiative, and chair of USU’s Department of Radiology.  “3D printing provides the ability to produce tailored health care solutions that meet the specific needs of the warfighter deployed to austere locations. The ability to build health-related products in near real time when and where needed also enhances operational flexibility for our commanders in the field. As we continue to meet the needs of our nation’s warfighters, this pilot project is also the first step in manufacturing health care products on-site to help identify and treat battlefield injuries and medical conditions.”

This initiative was a collaborative effort between USU, West Point, and The Geneva Foundation, along with NScrypt and Techshot.

About the Uniformed Services University:

The Uniformed Services University of the Health Sciences (USU) is the nation's only Federal health sciences university.  USU educates, trains and prepares uniformed services health professionals, officers and leaders to directly support the Military Health System, the National Security and National Defense Strategies of the United States and the readiness of our armed forces. For more information, visit:  www.usuhs.edu.

About the 4D Bio3

The Uniformed Services University’s 4D Bio3 is a federally funded program that advances the development and application of advanced bioprinting, biofabrication, and biomanufacturing technologies for research pursuant to Department of Defense (DoD) priorities and ultimately for translation into clinical medical defense care and training solutions, advancing the future care for the next generation of our nation’s deployed warfighters.  For more information, visit: 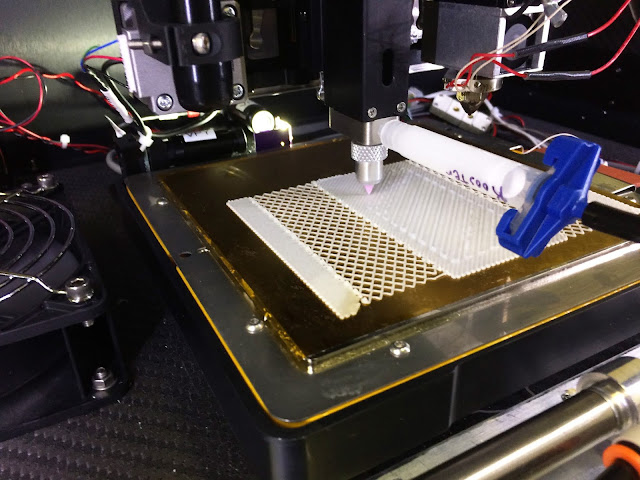 Caption: The 3D printer develops bioactive bandages by printing a hydrogel layer of antibiotics over a structural layer, all within just five minutes. 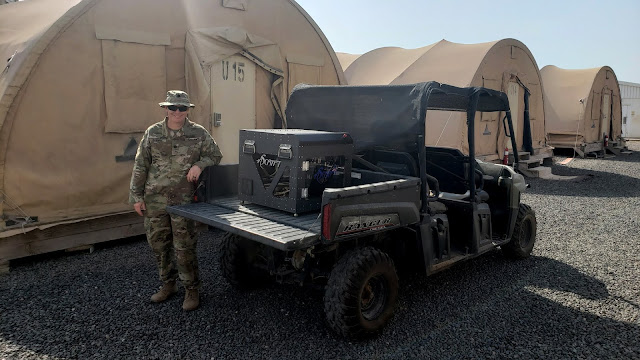 Caption: Army Lt. Col. Jason Barnhill, a faculty member of West Point and USU’s Department of Radiology, poses for a photo with the 3D printer. 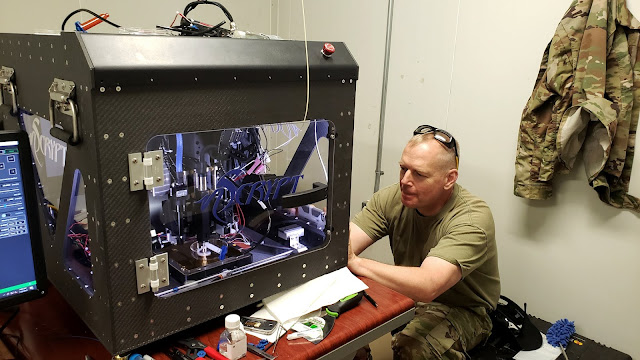