Antibiotics could be promising treatment for form of dementia 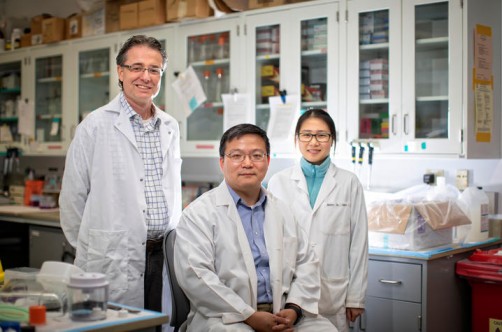 University of Kentucky researchers (from left) Matthew Gentry, Haining Zhu and Lisha Kuang co-authored a study that shows a class of antibiotics could be a promising therapy for frontotemporal dementia.

Newswise — LEXINGTON, Ky. (Jan. 10, 2020) — Researchers at the University of Kentucky’s College of Medicine have found that a class of antibiotics called aminoglycosides could be a promising treatment for frontotemporal dementia.

Results of their proof of concept study, which was a collaborative effort between UK’s Department of Molecular and Cellular Biochemistry and the University of California San Francisco’s Department of Pathology, were recently published in the journal, Human Molecular Genetics.

Frontotemporal dementia is the most common type of early onset dementia. It typically begins between ages 40 and 65 and affects the frontal and temporal lobes of the brain, which leads to behavior changes, difficulty speaking and writing, and memory deterioration.

A subgroup of patients with frontotemporal dementia have a specific genetic mutation that prevents brain cells from making a protein called progranulin. Although progranulin is not widely understood, its absence is linked to the disease.

A group led by Haining Zhu, a professor in UK’s Department of Molecular and Cellular Biochemistry, discovered that after aminoglycoside antibiotics were added to neuronal cells with this mutation, the cells started making the full-length progranulin protein by skipping the mutation.

“These patients’ brain cells have a mutation that prevents progranulin from being made. The team found that by adding a small antibiotic molecule to the cells, they could ‘trick’ the cellular machinery into making it,” said Matthew Gentry, a co-author of the study and the Antonio S. Turco Endowed Professor in the Department of Molecular and Cellular Biochemistry.

The researchers found two specific aminoglycoside antibiotics - Gentamicin and G418 - were both effective in fixing the mutation and making the functional progranulin protein. After adding Gentamicin or G418 molecules to the affected cells, the progranulin protein level was recovered up to about 50 to 60%.

These results could be promising to drug development. Currently, there are no effective therapies for any type of dementia.

After this preclinical proof of concept study, the next step is to study the antibiotics’ effects on mice with the mutation that causes frontotemporal dementia, Zhu says. Another focus is to possibly develop new compounds from Gentamicin and G418 that could be safer and more effective. Although Gentamicin is an FDA-approved medication, its clinical usage is limited as it is associated with a number of adverse side effects.

“If we can get the right resources and physician to work with, we could potentially repurpose this drug. This is an early stage of the study, but it provides an important proof of concept that these aminoglycoside antibiotics or their derivatives can be a therapeutic avenue for frontotemporal dementia,” said Zhu.

The University of Kentucky is increasingly the first choice for students, faculty and staff to pursue their passions and their professional goals. In the last two years, Forbes has named UK among the best employers for diversity, and INSIGHT into Diversity recognized us as a Diversity Champion three years running. UK is ranked among the top 30 campuses in the nation for LGBTQ* inclusion and safety. UK has been judged a “Great College to Work for" two years in a row, and UK is among only 22 universities in the country on Forbes' list of "America's Best Employers."  We are ranked among the top 10 percent of public institutions for research expenditures — a tangible symbol of our breadth and depth as a university focused on discovery that changes lives and communities. And our patients know and appreciate the fact that UK HealthCare has been named the state’s top hospital for four straight years. Accolades and honors are great. But they are more important for what they represent: the idea that creating a community of belonging and commitment to excellence is how we honor our mission to be not simply the University of Kentucky, but the University for Kentucky.