Antibodies on nanoparticle surfaces may foster or fluster therapies 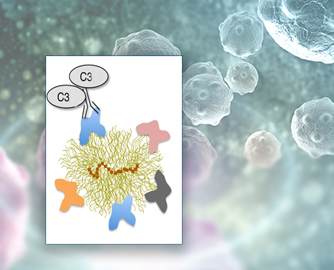 Representation of C3 molecules of complement immune system binding to antibody. First, the immunoglobulin binds to the protein that is part of the corona of a nanoparticle (blue), followed by binding of C3 to the antibody. When marked with C3, the nanoparticle is marked as an invading pathogen, setting off immune response that attacks the nanoparticle and may be dangerous to a patient.

Newswise — For nanomedicine to achieve the envisioned breakthroughs in disease treatment, scientists must learn why the immune system often responds inhospitably to these therapies. An NIH-funded team at the University of Colorado (UC) has assembled a clearer picture of the molecular activity that occurs when nanoparticles injected into the body are marked for immune system attack.

With support from the National Institute of Biomedical Imaging (NIBIB) and the National Cancer Institute (NCI), the team led by Dmitri Simberg, Ph.D., associate professor of pharmaceutical sciences at UC, looked at the composition of the nanoparticle corona—proteins that form a shell around the nanoparticle once it is introduced to the bloodstream. Among the corona proteins are natural antibodies that are part of each person’s unique immunologic makeup. Simberg’s study found that these natural antibodies lead some people to mount an immune system attack on the nanoparticles prepared to treat their conditions. Their work is described in a Jan. 14, 2019, study in Nature Nanotechnology.

With his NIBIB grant, Simberg studies the complement system—an aspect of the immune system that originates from birth and is programmed to switch on when confronted by harmful viruses and bacteria. Their studies explore how the complement system becomes activated by nanoparticles—and how to create new designs that could serve to prevent that activation and the adverse results that can occur in patients’ bodies.

Nanoparticles are microscopic structures—smaller than 100 nanometers in diameter— designed to locate and interrupt disease processes in the body. They may also be composed of metals that can be detected during diagnostic imaging once they have traveled to a specified region of the body. Simberg’s team performed tests that included nanoparticles containing iron, as well as two other nanoparticles of a type called liposomes, both of which are approved for treatment of breast cancer and gastrointestinal cancer. They ran their tests in the laboratory, observing molecular activity in two forms of blood products—serum and plasma from healthy donors and plasma alone from donors diagnosed with metastatic breast cancer.

To further demonstrate the immune triggering mechanism, the team removed the natural antibodies from the blood-product samples and observed that the complementary immune activation did not result. When they returned antibodies to the blood products, complement activation occurred as before or even stronger.

The team had published previously that that a nanoparticle’s corona is important for complement attack, but this is the first study that pinpoints natural antibodies as the critical player in triggering immune attacks. This discovery will guide future research into ways that nanoparticles can be designed with protection from complement immune system attacks. Tools do not yet exist, however, that can predict which patients are likely to obtain a positive benefit from nanoparticle therapies and which would experience an immunologic reaction to the therapy. Simberg suggests that personalized medicine approaches are needed to predict effects that nanomaterials may produce in the body of different individuals.

“This knowledge step is important for designing a better coating so the particles can be more biocompatible and safer,” Simberg said. “I’m a really big fan and proponent of mechanistic studies in the nanodrug delivery field that can guide us to better designs.”

“This is a study with important lessons for nanoparticle therapy development and use,” said David Rampulla, Ph.D., director of the NIBIB program in Biomaterials. “In their findings, Simberg’s team have shown that nanomedicine advances require a combination of specialized skills, from engineering, pharmacology, biochemistry, immunology and more. It is truly complex, but the possible applications are promising.”

In future studies, Simberg’s team will investigate the mechanisms that enable natural antibodies to bind to proteins in the corona and how the nanoparticle surface can be designed to prevent adverse immune reactions.

The researchers received support from NIH, including funding from NIBIB (EB022040) and from the National Cancer Institute (CA194058 and CA174560).