APA Stress in America™ Survey: US at ‘Lowest Point We Can Remember;’ Future of Nation Most Commonly Reported Source of Stress 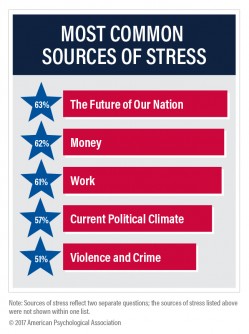 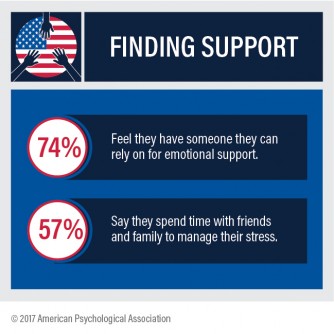 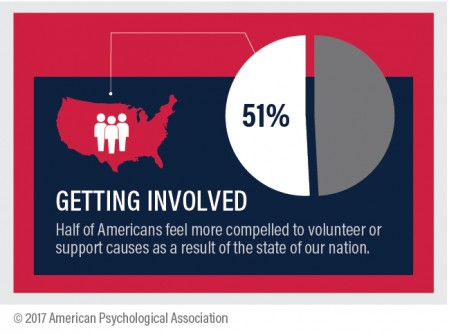 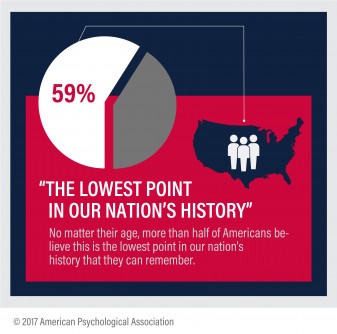 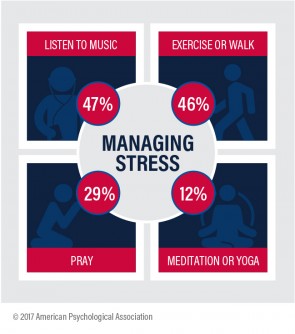 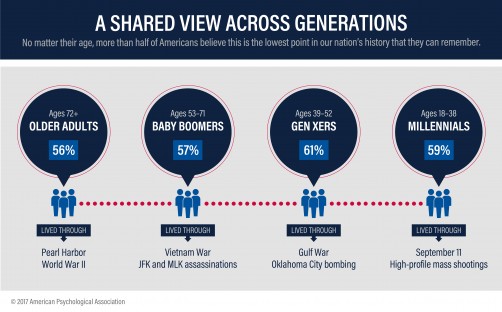 Newswise — WASHINGTON — Nearly two-thirds of Americans (63 percent) say the future of the nation is a very or somewhat significant source of stress, slightly more than perennial stressors like money (62 percent) and work (61 percent), according to the American Psychological Association’s report, Stress in America™: The State of Our Nation.

More than half of Americans (59 percent) said they consider this the lowest point in U.S. history that they can remember — a figure spanning every generation, including those who lived through World War II and Vietnam, the Cuban Missile Crisis and the Sept. 11 terrorist attacks.

When asked to think about the nation this year, nearly six in 10 adults (59 percent) report that the current social divisiveness causes them stress. A majority of adults from both political parties say the future of the nation is a source of stress, though the number is significantly higher for Democrats (73 percent) than for Republicans (56 percent) and independents (59 percent).

“We’re seeing significant stress transcending party lines,” said Arthur C. Evans Jr., PhD, APA’s chief executive officer. “The uncertainty and unpredictability tied to the future of our nation is affecting the health and well-being of many Americans in a way that feels unique to this period in recent history.”

Adults also indicated that they feel conflicted between their desire to stay informed about the news and their view of the media as a source of stress. While most adults (95 percent) say they follow the news regularly, 56 percent say that doing so causes them stress, and 72 percent believe the media blows things out of proportion.

“With 24-hour news networks and conversations with friends, family and other connections on social media, it’s hard to avoid the constant stream of stress around issues of national concern,” said Evans. “These can range from mild, thought-provoking discussions to outright, intense bickering, and over the long term, conflict like this may have an impact on health. Understanding that we all still need to be informed about the news, it’s time to make it a priority to be thoughtful about how often and what type of media we consume.”

The survey also found that 51 percent of Americans say that the state of the nation has inspired them to volunteer or support causes they value. More than half (59 percent) have taken some form of action in the past year, including 28 percent who signed a petition and 15 percent who boycotted a company or product in response to its social or political views or actions.

This year’s survey showed no significant differences in stress across the country’s four regions, with the East reporting a stress level of 4.7, and the South, Midwest and West all reporting stress levels of 4.8. The regions do differ, however, in their sentiments about the future of the nation: Adults in the West (70 percent) were more likely than those in the South (63 percent), East (60 percent) and Midwest (56 percent) to consider the future of the nation as a somewhat or very significant source of stress.

To read the full Stress in America report or to download graphics, visit http://www.stressinamerica.org

For additional information on stress, lifestyle and behaviors, visit www.apa.org/helpcenter. Join the conversation about stress on Twitter by following @APAHelpCenter and #stressAPA.

The 2017 Stress in America™ survey was conducted online within the United States by Harris Poll on behalf of the American Psychological Association between Aug. 2 and 31, 2017, among 3,440 adults age 18+ who reside in the U.S., including 1,376 men, 2047 women, 1,088 white, 810 Hispanic, 808 black, 506 Asian, and 206 Native American adults. Interviews were conducted in English (n=3,187) and Spanish (n=253). Data were weighted to reflect their proportions in the population. Weighting variables included age, gender, race/ethnicity, education, region and household income. Propensity score weighting was also used to adjust for respondents’ propensity to be online. Hispanic respondents were weighted for acculturation, taking into account respondents’ household language as well as ability to read and speak in English and Spanish. Because the sample is based on those who were invited and agreed to participate in the Harris Poll online research panel, no estimates of theoretical sampling error can be calculated. A full methodology is available upon request.