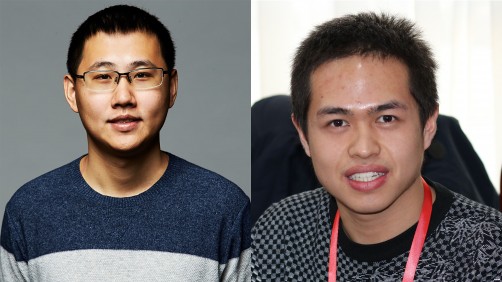 "Diffuse correlation spectroscopy (DCS) is a well-established biophotonics technology to noninvasively measure rapid changes, such as blood flow and functional dynamics deep within tissue," said Qian. "However, conventional DCS systems have limited sensitivity and temporal resolution with only one or a few detection channels."

The team tested the device on the human forehead, measuring pulse at high fidelity and detecting behaviorally induced physiological variations.

"We demonstrate over a tenfold improvement in measurement speed and sensitivity through a highly parallelized detection strategy," said Liu.

Qian received his doctorate degree in biomedical engineering from Duke University in 2020, then progressed to Meta Reality Labs to develop optical technologies in virtual and augmented reality.

"It was a great honor to receive this award with Wenhui Liu," said Qian. "It is exciting to see how emerging single-photon avalanche diode array sensors can significantly improve the sensitivity and speed of biological imaging and sensing technologies, and I look forward to seeing more breakthroughs in this field!"

Liu is a doctorate candidate in the department of automation at Tsinghua University in Beijing, China, where he focuses on computational photography and advanced biomedical imaging technology.

"Receiving this award is absolutely a memorable event in my career," said Liu. "It is not only an affirmation, but also encouragement to continue my research and do real, meaningful work."

Despite its enhanced performance, the parallel DCS system is not significantly more complex than previous technology. It can be applied for noninvasive detection of functional brain dynamics and tomographic measurement of cerebral blood ﬂow, potentially playing an important future role in clinical detection and biological experiments.

The APL Photonics Future Luminary award, which recognizes early career researchers with the potential to become luminaries in the field of photonics, includes a $3,000 honorarium, the opportunity to join the APL Photonics Early Career Editorial Advisory Board, and an invitation to write an Invited Article in APL Photonics.

APL Photonics is the dedicated home for open access multidisciplinary research from and for the photonics community. The journal publishes fundamental and applied results that significantly advance the knowledge in photonics across physics, chemistry, biology, and materials science.

AIP Publishing's mission is to advance, promote, and serve the physical sciences for the benefit of humanity by breaking barriers to open, equitable research communication and empowering researchers to accelerate global progress. AIP Publishing is a wholly owned not-for-profit subsidiary of the American Institute of Physics (AIP) and supports the charitable, scientific, and educational purposes of AIP through scholarly publishing activities on its behalf and on behalf of our publishing partners.