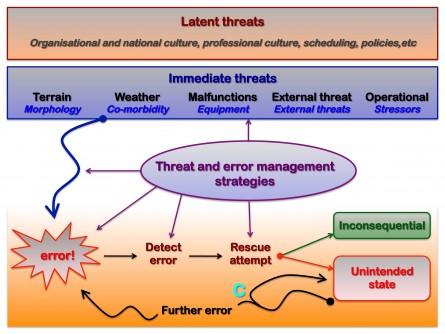 Immediate environmental threats act on the crew and increase the probability of an error arising from them. Alternatively, errors may occur unprompted, de novo. Some errors may be inherently inconsequential. Others may be inconsequential because of error detection and appropriate rescue. However, an unintended state will occur if either: 1) the error is not detected and is not inconsequential in nature, or 2) if the error is detected but not rescued appropriately. An unintended state may in itself give rise to little or no reduction in safety margin. However, the unintended state represents a deviation from the expected flightplan and is a risk factor for additional CYCLES (“C”) of unintended states and/or errors. This cycling effect amplifies the deviation from the expected and leads to progressive reduction in safety margins. Occasionally, such cycling will give rise to a major catastrophe (the “outcome,” not shown). Threat and error management strategies serve to reduce and contain threats, improve error detection and rescue, and break error cycles. Crew resource management is one important part of threat and error management; there are many other additional strategies. Latent threats are the organizational, professional and management cultures which greatly modify the prevalence of threats, errors and their management.

Newswise — Investigators propose that NASA’s “threat and error model” – derived from analyzing >30,000 commercial flights and which explains >90% of crashes – is directly applicable to pediatric cardiac surgery.

Toronto, ON, Canada, April 28, 2014 – All high-stakes industries that function at very high "6-sigma" safety levels have a pre-occupation with human error. The aviation industry epitomizes this concept; during the 1970s NASA and aviation researchers realized that humans are the least reliable resource in the cockpit. Subsequent research into >30,000 flights has confirmed that human error is inevitable, ubiquitous, and therefore needs to be understood and managed. Mismanaged error leads to cycles of further error and unintended states, with consequent loss of safety margins.

Using their experience with aviation errors, NASA/FAA researchers generated a "threat and error model." Now, researchers have applied this “threat and error model” to a pediatric cardiac surgery program. Edward J. Hickey, MD, a cardiac surgeon at The Labatt Family Heart Centre, The Hospital for Sick Children, Toronto, Canada, is presenting the results of his department’s experience at the 94th AATS Annual Meeting in Toronto, ON, Canada, on April 28, 2014.

“We considered every patient's peri-operative journey to be a ‘flight,’ and we tracked it from patient arrival in the operating room until the point of discharge, with the aim of identifying ‘threats,’ ‘errors,’ unintended clinical states, and harmful outcomes,” says Dr. Hickey. He reports on the results of “flight tracking” for the first 500 consecutive patients admitted for pediatric heart surgery (85% utilizing cardiopulmonary bypass).

Among the 524 “patient flights” that these 500 pediatric cardiac patients experienced, 763 threats were identified. More than 85% of threats were end-organ dysfunction, non-cardiac congenital lesions, and unusual or complex variants of a particular lesion type. “We saw that almost all threats were apparent before the flight had begun,” comments Dr. Hickey.

The researchers found that only 50% of patient flights were error-free. Most errors, which were related to “proficiency” or “judgment,” were consequential in that they led to an unintended clinical state. Over 60% of consequential errors (~20% of all patient flights) led to cycles of additional error and unintended state – i.e. progressive loss of safety margins. Such cycles were very significantly associated with harmful patient outcomes, such as brain injury, residual cardiovascular lesions, or death. Deaths were almost always preceded by error cycles.

“We conclude that the progressive degradation of safety margins that occurs in most aviation disasters, and I use Air France 447 as an example, has direct corollaries in medicine,” states Dr. Hickey. He and his co-investigators suggest that error needs to be expected, better understood, and better managed, and that heightened levels of vigilance are essential for prompt error detection. They believe that optimizing communication and resource utilization during unexpected deviations from the planned clinical journey (using techniques similar to "Crew Resource Management" in commercial aviation training) will likely improve error rescue and have a positive impact on patient outcomes.

For more information contact Nicole Baritot, Managing Editor, AATS Scientific Publications, at +1 978-299-4520 or [email protected] Journalists wishing to interview Dr. Hickey may contact him directly at +1 416 813 6420 or [email protected] The presentation abstract is located at http://www.aats.org/annualmeeting/Program-Books/2014/3.cgi.

This work was supported by internal program development funds and grants from The Hospital for Sick Children Department of Surgery and the Labatt Family Heart Centre, Sick Kids.

ABOUT THE AMERICAN ASSOCIATION FOR THORACIC SURGERY (AATS)The American Association for Thoracic Surgery (AATS) is an international organization of over 1,300 of the world’s foremost thoracic and cardiothoracic surgeons, representing 35 countries. AATS encourages and stimulates education and investigation into the areas of intrathoracic physiology, pathology and therapy. Founded in 1917 by a respected group of the last century’s earliest pioneers in the field of thoracic surgery, the AATS’ original mission was to “foster the evolution of an interest in surgery of the Thorax.”