The CSU’s new Sustainability Report shows the progress we're making toward our ambitious goals for greener, more efficient campuses. Here are some of the ways we’re doing it. 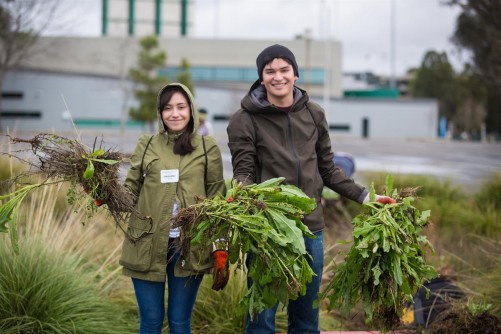 ​Student volunteers from Sacramento State's Community Engagement Center helping to maintain stormwater rain garden sites is just one example of how the CSU is working toward a greener future.

Newswise — Sustainability and eco-friendly initiatives take center stage around the world this month, leading up to Earth Day on April 22. At the California State University, though, innovative efforts to make our campuses greener and more efficient are happening every day.

The just-released 2018 CSU Sustainability Report examined our progress against 14 sustainability goals set in 2014 by the CSU Board of Trustees.

The findings, which cover 2014 to 2017, show that the CSU has already exceeded the 2020 goal for reducing greenhouse gas emissions as well as the target to reduce water use by 10 percent by 2016.

In recognition of Earth Month, here's a round-up of just a few eco-friendly feats worth celebrating at the CSU:

Learn more about how CSU campuses are working toward a more sustainable future.