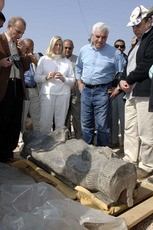 Betsy Bryan (in white), professor of Near Eastern studies at Johns Hopkins, and Dr. Zahi Hawass (in blue jeans), secretary general of the Egyptian Supreme Council of Antiquities, examine a 3,400-year-old nearly intact statue discovered during the 2006 season of the Johns Hopkins excavation in Luxor.

Newswise — Egyptologist Betsy Bryan and her crew are once again sharing their work with the world through an online diary, a digital window into day-to-day life on an archaeological dig. Starting about Friday, Jan. 19, and running through late February, visitors to "Hopkins in Egypt Today" at http://www.jhu.edu/neareast/egypttoday.html will find photos of Bryan and her colleagues working on The Johns Hopkins University's 12th annual expedition in Luxor. Bryan will continue to explore the Egyptian New Kingdom (1567 to 1085 B.C.E.), known as the "golden age" of Egyptian temple building.

According to Bryan, modern-day Luxor is rich in finds from the New Kingdom, like last year's major discovery: a 3,400-year-old nearly intact statue of Queen Tiy, one of the queens of the powerful king Amenhotep III. In an audio slide show -- accessible using Windows Media Player at http://www.jhu.edu/news_info/realmedia/egypt_2007.wmv -- Bryan recalls the discovery of the statue, which she calls "one of the true masterpieces of Egyptian art."

This is the seventh year Bryan -- the Alexander Badawy Professor in Egyptian Art and Archaeology -- and her team will be excavating the area behind the sacred lake at the temple of goddess Mut. In previous years, their finds have included industrial and food processing installations like granaries and bakeries. The goal of the "Hopkins in Egypt Today" Web site is to educate visitors by showing them the elements of archaeological work in progress. Photographer Jay VanRensselaer will capture images of the team as they carefully sift through trenches, uncovering mud brick walls, pottery sherds, animal bones and other remains. The daily photos and detailed captions emphasize not only discoveries, but the teamwork among Bryan, her colleagues, students and their "gufti," the local crew members who are trained in archaeology. That teamwork is essential to a successful dig, Bryan said.

The Web site typically garners more than 50,000 hits every winter when the dig is active. The site will return in June when Bryan will be working with a larger team, including students from Johns Hopkins and several stone conservators.