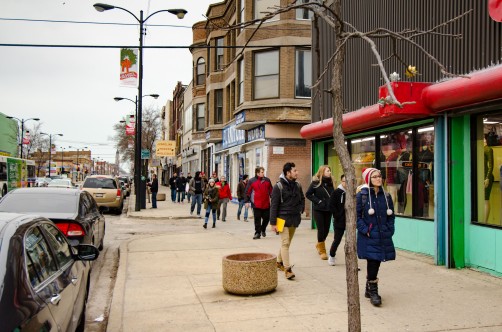 Students tour South Chicago as part of a competition to envision how a neighborhood can revitalize itself. 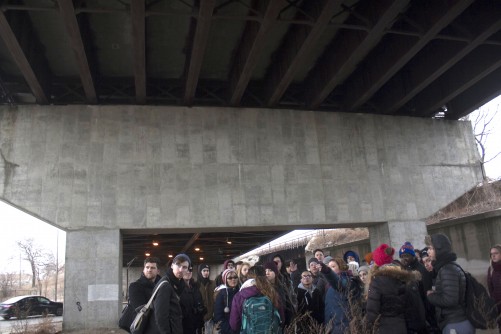 Students examine land under Chicago Skyway as part of competition.

Newswise — Nearly 60 students from the University of Illinois at Chicago’s School of Architecture are taking part in a competition to help revitalize the South Chicago neighborhood by planning recreational and open spaces on land under the Chicago Skyway.

The South Chicago Underline Project is a competition designed to tap into ideas generated by the 56 graduate and undergraduate architecture students as part of the competition. The UIC School of Architecture, in conjunction with the UIC Great Cities Institute and the South Chicago Chamber of Commerce, are partners in the project.

The effort is part of a larger revitalization initiative that began when the South Chicago Chamber of Commerce approached the Great Cities Institute for assistance in improving the area, said Meghan Funk, competition coordinator.

The Underline Project is designed to envision how a neighborhood can revitalize itself by reclaiming industrial and urban infrastructure. The plan is to have the students come up with proposals to transform the unused site along Commercial Avenue under the Skyway into a “highly visible and active public space,” according to the proposal.

The public space will act as the southern anchor of the South Chicago Commercial District that is the focus of the revitalization plan. It is an “instance of residual infrastructural dead space needing to be transformed from a wasteland into a rich public zone,” according to project organizers.

There are three main objectives of the competition, said Funk, who is also an adjunct assistant professor in the UIC School of Architecture.

“To provide the South Chicago Chamber of Commerce with visions and designs with which to begin implementing aspects of their Commercial Avenue Revitalization Plan; to provide School of Architecture students with the experience of projecting architectural agendas onto real projects with tangible clients; and to promote collaboration and greater community between the years of architecture students,” said Funk.

She said the project offers students an interesting perspective in which to test creative approaches to utilize public space, but also tries to hone a “real-world” perspective to plans.

“My hope is that students learn to embrace the culture-building potential of architecture, and to begin to see that architectural design at the urban scale needs to be balanced between an optimistic vision of potential futures and a practical approach to current factors,” Funk said.

The Great Cities Institute was created in 1995 to help fulfill the vision of UIC as a university committed to active engagement with various constituencies in the Chicago region.