Newswise — A new study led by the Georgia Institute of Technology provides further evidence of a relationship between melting ice in the Arctic regions and widespread cold outbreaks in the Northern Hemisphere. The study’s findings could be used to improve seasonal forecasting of snow and temperature anomalies across northern continents.

Since the level of Arctic sea ice set a new record low in 2007, significantly above-normal winter snow cover has been seen in large parts of the northern United States, northwestern and central Europe, and northern and central China. During the winters of 2009-2010 and 2010-2011, the Northern Hemisphere measured its second and third largest snow cover levels on record.

“Our study demonstrates that the decrease in Arctic sea ice area is linked to changes in the winter Northern Hemisphere atmospheric circulation,” said Judith Curry, chair of the School of Earth and Atmospheric Sciences at Georgia Tech. “The circulation changes result in more frequent episodes of atmospheric blocking patterns, which lead to increased cold surges and snow over large parts of the northern continents.”

The study was published on Feb. 27, 2012 in the online early edition of the journal Proceedings of the National Academy of Sciences. The research was supported by NASA and the National Science Foundation.

In this study, scientists from Georgia Tech, the Chinese Academy of Sciences and Columbia University expanded on previous research by combining observational data and model simulations to explore the link between unusually large snowfall amounts in the Northern Hemisphere in recent winters and diminishing Arctic sea ice.

The researchers analyzed observational data collected between 1979 and 2010 and found that a decrease in autumn Arctic sea ice of 1 million square kilometers -- the size of the surface area of Egypt -- corresponded to significantly above-normal winter snow cover in large parts of the northern United States, northwestern and central Europe, and northern and central China.

The analysis revealed two major factors that could be contributing to the unusually large snowfall in recent winters -- changes in atmospheric circulation and changes in atmospheric water vapor content -- which are both linked to diminishing Arctic sea ice. Strong warming in the Arctic through the late summer and autumn appears to be enhancing the melting of sea ice.

“We think the recent snowy winters could be caused by the retreating Arctic ice altering atmospheric circulation patterns by weakening westerly winds, increasing the amplitude of the jet stream and increasing the amount of moisture in the atmosphere,” explained Jiping Liu, a senior research scientist in the School of Earth and Atmospheric Sciences at Georgia Tech. “These pattern changes enhance blocking patterns that favor more frequent movement of cold air masses to middle and lower latitudes, leading to increased heavy snowfall in Europe and the Northeast and Midwest regions of the United States.”

Diminishing Arctic sea ice can cause changes in atmospheric circulation that lead to a circulation pattern that is different than the “negative phase” of the Arctic Oscillation.

In addition to analyzing observational data, the researchers also assessed the impact of the diminishing Arctic sea ice on atmospheric circulation by comparing the results of model simulations run with different sea ice distribution. They ran one experiment that assumed seasonally varying Arctic sea ice and utilized sea ice concentration data collected between 1979 and 2010. Another simulation incorporated prescribed sea ice loss in autumn and winter based on satellite-derived Arctic sea ice concentrations.

The consistent relationships seen in the model simulations and observational data illustrate that the rapid loss of sea ice in summer and delayed recovery of sea ice in autumn modulates snow cover, winter temperature and the frequency of cold air outbreaks in northern mid-latitudes.

Huijun Wang and Mirong Song of the Chinese Academy of Sciences Institute of Atmospheric Physics and Radley Horton from the Columbia University Center for Climate Systems Research also contributed to this work.

This project was supported by the NASA Energy and Water Cycle Study and the National Science Foundation (NSF) (Award No. ANT-0838920). The content is solely the responsibility of the principal investigators and does not necessarily represent the official views of NASA or the NSF. 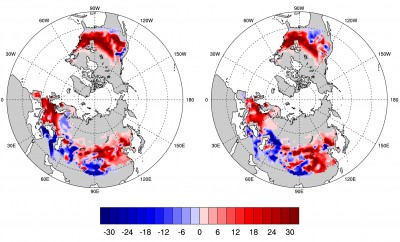 Caption: Maps showing the differences in snow cover relative to the long-term average for the winters of (left) 2009-2010 and (right) 2010-2011. During these two winters, the Northern Hemisphere measured its second and third largest snow cover levels on record. 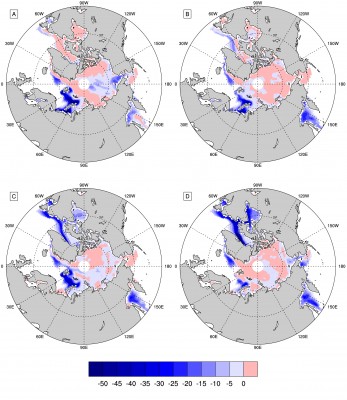 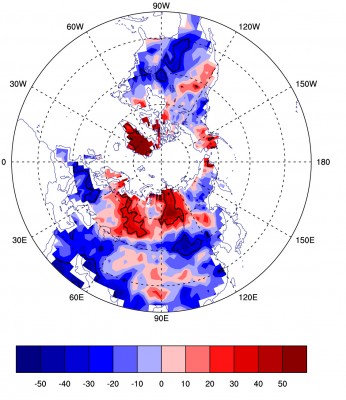 Caption: Map showing the percent change in winter blockings relative to the long-term average. Blocking patterns favor more frequent movement of cold air masses to middle and lower latitudes, leading to increased heavy snowfall in Europe and the Northeast and Midwest regions of the United States.