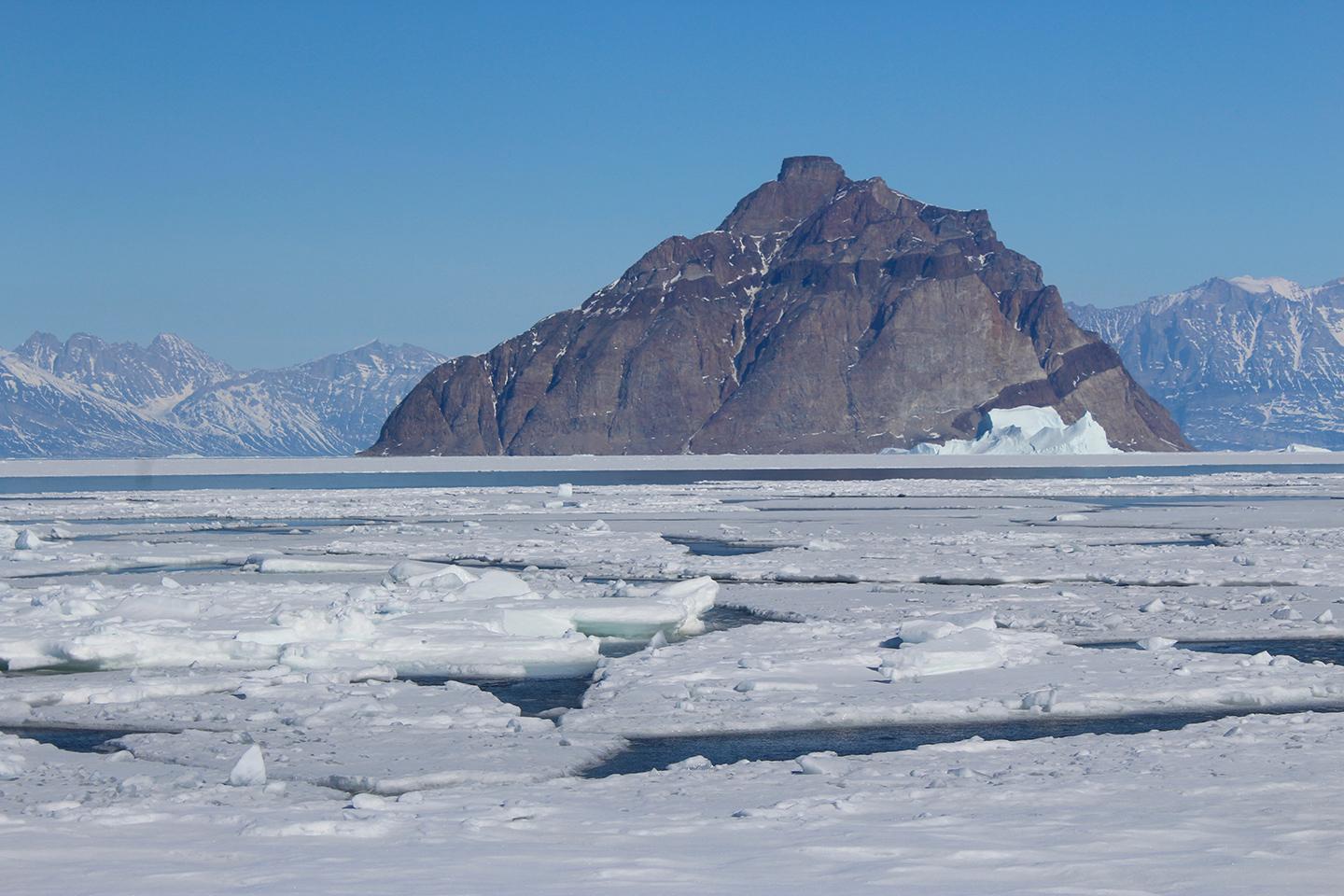 For people who live in the Arctic, sea ice that forms along shorelines is a vital resource that connects isolated communities and provides access to hunting and fishing grounds. A new study by Brown University researchers found that climate change could significantly reduce this "shorefast ice" in communities across Northern Canada and Western Greenland. The image shows shorefast ice beginning to break up near Uummannaq, Greenland.

Newswise — PROVIDENCE, R.I. [Brown University] -- For people who live in the Arctic, sea ice that forms along shorelines is a vital resource that connects isolated communities and provides access to hunting and fishing grounds. A new study by Brown University researchers found that climate change could significantly reduce this "shorefast ice" in communities across Northern Canada and Western Greenland.

The study, published in Nature Climate Change, used weather data and near-daily satellite observations of 28 Arctic communities to determine the timing of shorefast ice breakup in each location over the past 19 years. The analysis enabled the researchers to determine the conditions that drive springtime ice breakup. Then they use climate models to predict how that timing might change in each community as the planet warms.

The analysis found that by 2100, communities could see shorefast ice seasons reduced by anywhere from five to 44 days, with the coldest communities in the study seeing the largest reductions. The wide range of potential outcomes was a surprise, the researchers say, and underscores the need to take local factors into account when making policy to prepare for future climate change.

"One of the key takeaways for me is that even though the whole Arctic is going to warm and lose ice, we see very different outcomes from one community to another," said Sarah Cooley, lead author of the study and a Ph.D. student in the Institute at Brown for Environment and Society (IBES). "When you combine that wide range of outcomes with the fact that different communities have lots of social, cultural and economic differences, it means that some communities may experience much larger impacts than others."

For example, the northern Canadian communities of Clyde River and Taloyoak, which are particularly dependent upon shorefast ice for subsistence hunting and fishing, will see some of the most substantial declines in sea ice. On average, these two communities can expect ice to break up 23 to 44 days earlier, respectively by 2100. That could mean "economically and culturally significant activities on the ice will be harder to maintain in the future," the researchers write.

That the coldest regions in the study could see the largest reductions in ice is cause for concern, says study co-author Johnny Ryan, a postdoctoral researcher at IBES.

"Some of these places are considered to be the last remnants of truly polar ecosystems and people talk a lot about preserving these areas in particular," Ryan said. "Yet these are the areas that we find will lose the most ice."

The research is part of a larger research effort aimed at better understanding how climate change in the Arctic will impact the people who live there. In addition to gathering satellite and scientific data, the research team conducted fieldwork in the community of Uummannaq in western Greenland to learn more about how the local population utilizes the ice.

"Shorefast ice is something that's most important from the standpoint of the people who use it," Cooley said. "It has some implications in terms of global climate, but those are fairly small. This is really all about how it affects the people who actually live in the Arctic, and that's why we're studying it."

The fieldwork also provided a first-hand perspective of how things have been changing over the years.

"One of the most powerful things that came out of the field study for me was listening to a hunter talk about how the ice is breaking up earlier than it ever has in his lifetime," Ryan said. "We're only observing this 20-year satellite record. But to be able to learn from locals about what things were like 50 or 60 years ago, it really emphasized how climate change has already impacted the community."

Moving forward, the research team is hopeful that mapping the local effects of regional and global climate patterns will be useful for policy-makers.

Other coauthors on the paper were Laurence C. Smith, Chris Horvat, Brodie Pearson, Brigt Dale and Amanda H. Lynch. The research was funded by a National Science Foundation (NNA 1836473).