Are Montana’s Invasive Fish in for a Shock? 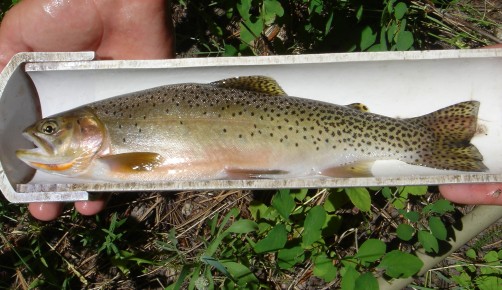 A westslope cutthroat trout is measured by scientists before being returned to White’s creek where it was collected.

Newswise — A new paper from the Wildlife Conservation Society, Montana State University, Montana Department of Fish, Wildlife and Parks, and the U.S. Geological Survey looks at the feasibility of electrofishing to selectively remove invasive trout species from Montana streams as an alternative to using fish toxicants known as piscicides that effect all gill-breathing organisms. Westslope Cutthroat Trout (WCT) have experienced severe declines throughout much of their historical range. One major reason for this decline is the current competitive advantages enjoyed by non-native Brook Trout that are displacing WCT from their habitat.

Due to this ongoing dynamic, data indicate that the probability of WCT persisting for the next century is low without intervention to remove non-native fish. The use of piscicides, such as rotenone or antimycin, to eradicate these fish concerns fish managers and the public because of the loss of native fish during treatments. Fortunately, most studies have shown that impacts from these piscicides on aquatic communities are relatively short-term.

“Piscicides are a valuable tool to remove non-native fish,” said Wildlife Conservation Society Ecologist Brad Shepard. “But where non-native and native fish co-exist in smaller streams, a potential alternative method, electrofishing, can be used to remove specific unwanted species, while reducing impacts on WCT or other native fish and macro-invertebrates.”

Trout populations within each treatment reach were isolated by fish barriers. The fish were shocked by a crew member wearing a backpack “shocker” using a wand anode while dragging a cable cathode. A second crewmember followed the shocker and netted the temporarily stunned fish. While the non-native species were removed, the native fish were returned.

Brook trout were successfully eradicated over a period of 4-8 years from four of six treatment sites that together totaled a distance of 10.8 km. The number of fish removed ranged from 1,627 in Staubach Creek to 7,936 in Muskrat Creek. Two other streams, Craver and Spring Creeks, contained dense willow and alder vegetation, and were excluded because of poor initial electrofishing efficiencies.

Other Findings:• Eradication of Brook Trout using electrofishing in the two smaller streams (where channel clearing was not required) cost about $3,500 to $5,500 per kilometer (about the cost of piscicide treatment). Where extensive clearing of the stream was necessary, as was the case with the more densely vegetated White Creek, electrofishing costs rose to $8,000 to $9,000 per kilometer.• The scientists found that multiple removal treatments within a shorter period of time (i.e. 3 or 4 years) was more effective than single annual treatments over a longer span (6 or more years). • The scientists took advantage of the fact that Brook Trout aggregate during winter and before and during their spawning in the fall. Focusing efforts on adult fish at these times reduced numbers of offspring in subsequent seasons. • Because trout select beaver pond habitats (where deposited silt makes wading dangerous and turbidity makes it difficult to see stunned fish), the authors say that treatment with piscicides is “probably the only viable alternative where large beaver ponds are present.”

Overall, the scientists concluded that electrofishing was a viable method for eradicating Brook Trout in small streams and could be done in a period as short as three years if multiple removals were conducted each year. This is an attractive alternative particularly in situations where populations of native fish live in the same location as non-native fish as “electrofishing will allow for the preservation of the native fish.”

Piscicides may be the only viable alternative for larger streams (>3m width), or in streams covered by dense woody vegetation or with beaver ponds where turbidity and cover make electrofishing difficult or impossible. The scientists noted that further studies would be necessary to determine if two crews working simultaneously could get the job done in larger streams.

Wildlife Conservation Society (WCS)MISSION: WCS saves wildlife and wild places worldwide through science, conservation action, education, and inspiring people to value nature. VISION: WCS envisions a world where wildlife thrives in healthy lands and seas, valued by societies that embrace and benefit from the diversity and integrity of life on earth. To achieve our mission, WCS, based at the Bronx Zoo, harnesses the power of its Global Conservation Program in more than 60 nations and in all the world’s oceans and its five wildlife parks in New York City, visited by 4 million people annually. WCS combines its expertise in the field, zoos, and aquarium to achieve its conservation mission. Visit: www.wcs.org. Follow: @thewcs.