Are We Missing Other Earths?

CosmoView Episode 30: Are We Missing Other Earths? Some exoplanet searches could be missing nearly half of the Earth-sized planets around other stars. New findings suggest that Earth-sized worlds could be lurking undiscovered in binary star systems, hidden in the glare of their parent stars. Observations were made with Gemini North in Hawai‘i and Gemini South in Chile and the WIYN 3.5-meter Telescope at Kitt Peak National Observatory in Arizona. As roughly half of all stars are in binary systems, this means that astronomers could be missing many Earth-sized worlds. 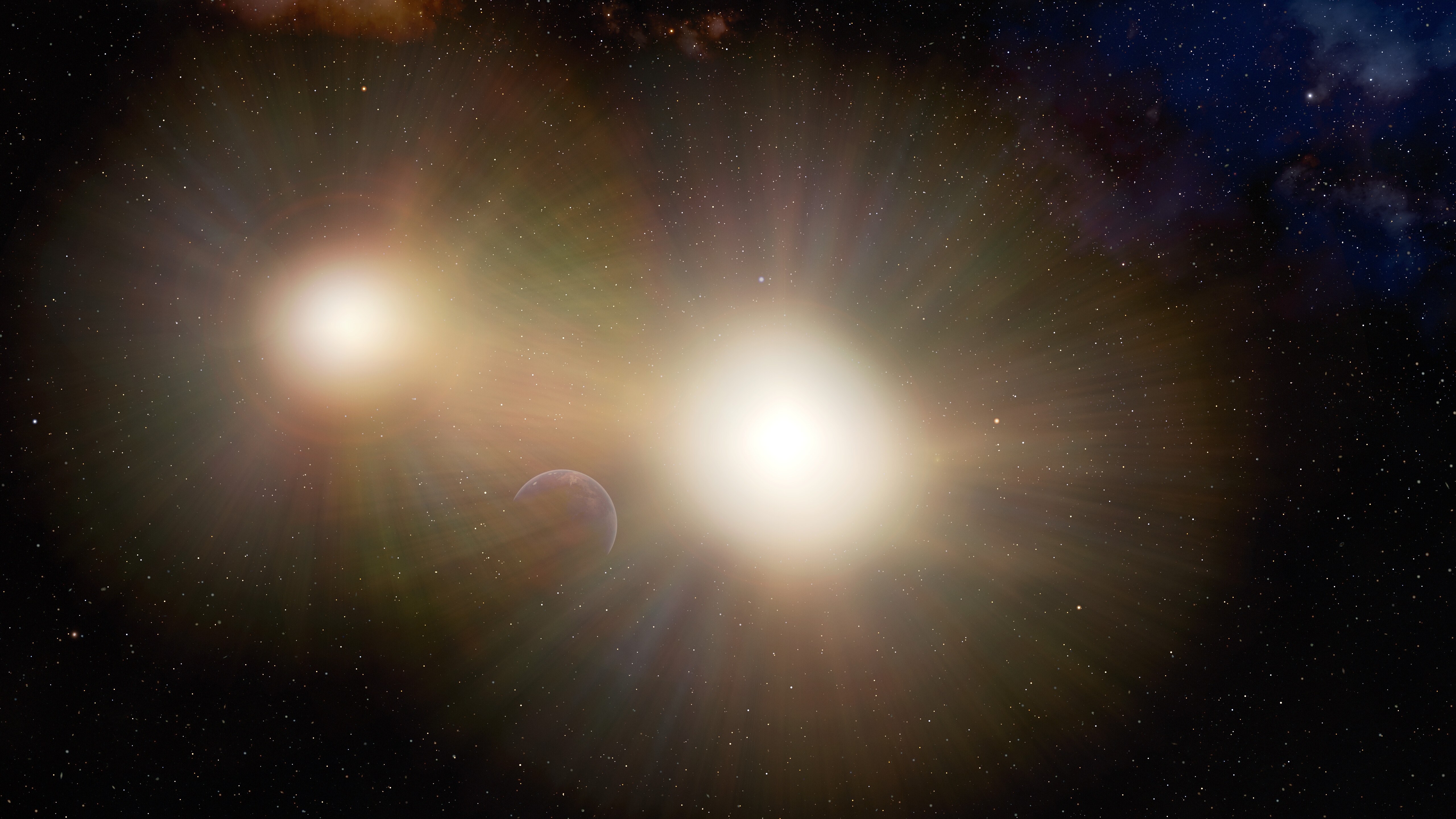 Planet Lost in the Glare of Binary Stars (illustration) This illustration depicts a planet partially hidden in the glare of its host star and a nearby companion star. After examining a number of binary stars, astronomers have concluded that Earth-sized planets in many two-star systems might be going unnoticed by transit searches, which look for changes in the light from a star when a planet passes in front of it. The light from the second star makes it more difficult to detect the changes in the host star’s light when the planet passes in front of it.

Newswise — Earth-sized planets may be much more common than previously realized. Astronomers working at NASA Ames Research Center have used the twin telescopes of the international Gemini Observatory, a Program of NSF’s NOIRLab, to determine that many planet-hosting stars identified by NASA’s TESS exoplanet-hunting mission [1] are actually pairs of stars — known as binary stars — where the planets orbit one of the stars in the pair. After examining these binary stars, the team has concluded that Earth-sized planets in many two-star systems might be going unnoticed by transit searches like TESS’s, which look for changes in the light from a star when a planet passes in front of it [2]. The light from the second star makes it more difficult to detect the changes in the host star’s light when the planet transits.

The team started out by trying to determine whether some of the exoplanet host stars identified with TESS were actually unknown binary stars. Physical pairs of stars that are close together can be mistaken for single stars unless they are observed at extremely high resolution. So the team turned to both Gemini telescopes to inspect a sample of exoplanet host stars in painstaking detail. Using a technique called speckle imaging [3], the astronomers set out to see whether they could spot undiscovered stellar companions.

Using the `Alopeke and Zorro instruments on the Gemini North and South telescopes in Chile and Hawai‘i, respectively, [4] the team observed hundreds of nearby stars that TESS had identified as potential exoplanet hosts. They discovered that 73 of these stars are really binary star systems that had appeared as single points of light until observed at higher resolution with Gemini. “With the Gemini Observatory's 8.1-meter telescopes, we obtained extremely high-resolution images of exoplanet host stars and detected stellar companions at very small separations,” said Katie Lester of NASA’s Ames Research Center, who led this work.

After identifying the binary stars, the team compared the sizes of the detected planets in the binary star systems to those in single-star systems. They realized that the TESS spacecraft found both large and small exoplanets orbiting single stars, but only large planets in binary systems.

These results imply that a population of Earth-sized planets could be lurking in binary systems and going undetected using the transit method employed by TESS and many other planet-hunting telescopes. Some scientists had suspected that transit searches might be missing small planets in binary systems, but the new study provides observational support to back it up and shows which sizes of exoplanets are affected [5].

“We have shown that it is more difficult to find Earth-sized planets in binary systems because small planets get lost in the glare of their two parent stars,” Lester stated. “Their transits are ‘filled in’ by the light from the companion star,” added Steve Howell of NASA's Ames Research Center, who leads the speckle imaging effort and was involved in this research.

“Since roughly 50% of stars are in binary systems, we could be missing the discovery of — and the chance to study — a lot of Earth-like planets,” Lester concluded.

The possibility of these missing worlds means that astronomers will need to use a variety of observational techniques before concluding that a given binary star system has no Earth-like planets. “Astronomers need to know whether a star is single or binary before they claim that no small planets exist in that system,” explained Lester. “If it's single, then you could say that no small planets exist. But if the host is in a binary, you wouldn't know whether a small planet is hidden by the companion star or does not exist at all. You would need more observations with a different technique to figure that out.”

As part of their study, Lester and her colleagues also analyzed how far apart the stars are in the binary systems where TESS had detected large planets. The team found that the stars in the exoplanet-hosting pairs were typically farther apart than binary stars not known to have planets [6]. This could suggest that planets do not form around stars that have close stellar companions.

“This is a major finding in exoplanet work,” Howell commented. “The results will help theorists create their models for how planets form and evolve in double-star systems.”

[1] TESS is the Transiting Exoplanet Survey Satellite, a NASA mission designed to search for planets orbiting other stars in a survey of around 75% of the entire night sky. The mission launched in 2018 and has detected more than 3500 candidate exoplanets, of which more than 130 have been confirmed. The satellite looks for exoplanets by observing their host stars; a transiting exoplanet causes a subtle but measurable dip in the brightness of its host star as it crosses in front of the star and blocks some of its light.

[2] The transit technique is one way of discovering exoplanets. It involves looking for regular decreases in the light of a star that could be caused by a planet passing in front of or “transiting” the star and blocking some of the starlight.

[3] Speckle imaging is an astronomical technique that allows astronomers to see past the blur of the atmosphere by taking many quick observations in rapid succession. By combining these observations, it is possible to cancel out the blurring effect of the atmosphere, which affects ground-based astronomy by causing stars in the night sky to twinkle.

[4] `Alopeke & Zorro are identical imaging instruments permanently mounted on the Gemini North and South telescopes. Their names mean “fox” in Hawaiian and Spanish, respectively, reflecting their respective locations on Maunakea in Hawaiʻi and on Cerro Pachón in Chile.

[5] The team found that planets twice the size of Earth or smaller could not be detected using the transit method when observing binary systems.

This research is presented in the paper “Speckle Observations of TESS Exoplanet Host Stars. II. Stellar Companions at 1-1000 AU and Implications for Small Planet Detection” to appear in the Astronomical Journal.