Are Wolverines in the Arctic in the Climate Change Crosshairs? 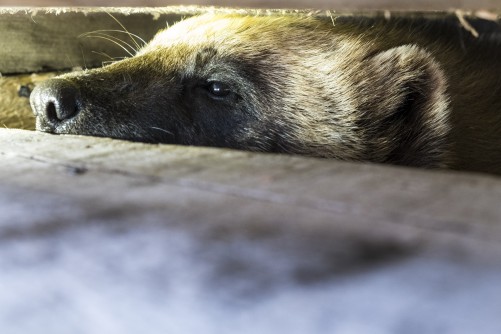 A wolverine peers out from a live trap awaiting a GPS collar to be affixed by WCS staff. 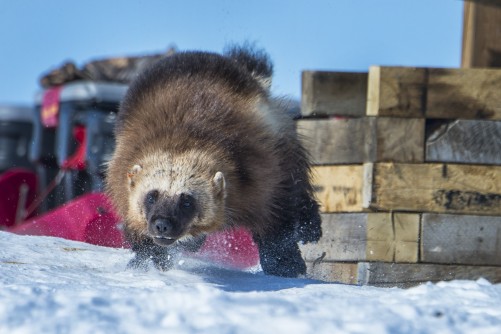 The wolverine is released after collaring.

Wolverines are the largest land-dwelling members of the weasel family, and use snow-pack for denning, caching food, and other needs. Since snow cover provides a key component to wolverine habitat, determining where snow will be available, and in what amounts, will be critical to managing the future for the elusive carnivores.

That determination is seen as key to deciding listing under the Endangered Species Act. To better inform this discussion, the United States Fish and Wildlife Service has stated the need for more information on the relationship of wolverine distribution to persistent snow at the den-scale.

In their study, the authors looked at snow at the den-site scale in late May using low-altitude aerial photography in wolverine denning habitat both in the Rocky Mountains of the western United States and in northwestern Alaska.

In the Rocky Mountains, they documented snow in all but one study area. Snow in the Alaska study area was mostly gone, with only widely scattered patches remaining for cover.  The study emphasizes the need for additional surveys to determine whether reductions in Arctic snow cover could make tundra-dwelling wolverines more vulnerable to climate change than previously thought.

Meanwhile, the WCS Arctic Beringia Program is focusing on how wolverines use that snow and how obligate this usage is—information vital to optimally managing this species in a time of rapid climatic change.

Staff have just returned from three months of working on Alaska’s North Slope in frigid temperatures in an effort to identify areas used by wolverines and monitor them with remote cameras and GPS collars. This equipment will document how wolverines use the landscape from a time of 100 percent snow cover to bare tundra, allowing scientists to assess how animals use snow, their productivity, diet, and other key questions.

“The question on how wolverines will be affected by climate change is clearly complex,” says WCS wolverine program coordinator and lead researcher Tom Glass. “During our aerial and ground-based surveys on the North Slope, we have observed the use of snow holes for denning, and also by both males and females for caching food, resting, or perhaps shelter from predators such as wolves.” If snow is lost too early, then wolverine kits may be exposed to the elements and predators before they are ready.

Using both traditional scientific surveys as well as learning from local Iñupiat experts who have hunted and trapped wolverines (locally known as Qavvik) for generations, new information collected will help inform an assessment of the health of the population.

Glass’s work over the next two years will focus on mapping habitat use in the spring as snow melts earlier and more variably in the Arctic.

“Given the iconic recognition of wolverines, it is surprising how little we know about their ecology in the Arctic,” says Glass.

To secure a future for wolverines, increasing that understanding is priority one.

This work was supported by the M.J. Murdock Charitable Trust, Wilburforce Foundation, and The Wolverine Foundation, Inc. 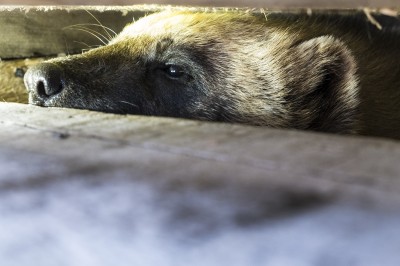 Caption: A wolverine peers out from a live trap awaiting a GPS collar to be affixed by WCS staff. 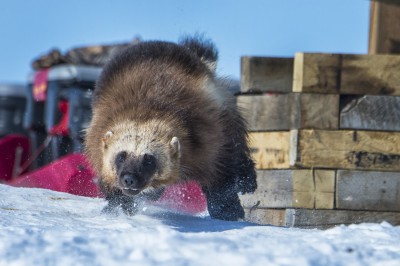 Caption: The wolverine is released after collaring.