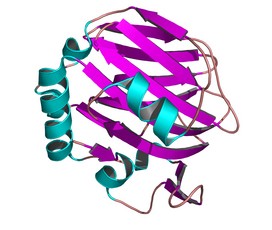 The image shows the protein structure of thrombospondin-1.

Newswise — Researchers at the Structural Biology Center (SBC) at the U.S. Department of Energy's Argonne National Laboratory have contributed their 1,000th structure to the Protein Data Bank. The data bank houses the molecular structures of all proteins characterized so far and makes them available to researchers worldwide to study.

This structure " and its 999 predecessors determined with data obtained at Argonne's SBC " provides important pieces to the puzzle of understanding human and environmental health by imaging the molecules that control and regulate it.

The 1,000th deposit is a three-dimensional structure of thrombospondin-1 that provides insight into how cells sense and communicate information about their health and how that information triggers cell responses ranging from raising defenses to fight disease and other perceived threats to cell death.

Thrombospondins are a family of extracellular glycoproteins that regulate cellular behavior during tissue genesis and repair such as wound healing. These functions are mediated by its interaction with a proteins and proteoglycans in the extracellular environment and at the cell surface.

The research was published in Structure (2006 Jan. 14 (1): 33-42), and is a collaboration between the Dana Farber Cancer Institute of Harvard Medical School and Argonne's SBC.

"SBC has been a pioneer of protein structure determination at the APS and worldwide," said Argonne's Associate Laboratory Director for Scientific User Facilities Murray Gibson. "This is a marvelous achievement."

Some of the structures have revealed how proteins are synthesized inside the cell (ribosome), how we see light (rhodopsin), how cells communicate (integrin) and how cells differentiate (gene regulatory factors). Other findings have shed insight into origins of diseases including cancer, diabetes, osteoporosis, and infections by human pathogens causing staph, anthrax and other infectious diseases.

Among the characterized proteins are 280 related to human disease — including cancer, the deadly anthrax bacterium and the common cold virus — 150 from human pathogens and 210 more with biotechnological applications that will contribute to increased productivity, new biomedical tests and applications.

"This is the first time any center has produced so many structures," said Argonne's Director of the SBC Andrzej Joachimiak. "When you consider it took six years (starting in 1972) to deposit the first 37 structures into the Protein Data Bank, you see how technology has advanced for SBC users to have deposited 1,000 structures in six years."

"One of the challenges facing structural biologists and indeed much of biology has been the slow pace, often measured in months or years, of determining the structures of biomolecules that are important for advances in energy, health and the environment," said Ari Patrinos, DOE associate director of science for biological and environmental research.

"This achievement represents an important step to narrow the gap between the current pace of gene discovery and the ability of scientists to have access to new information on the functions of those genes," Patrinos said. "This Department of Energy-funded user facility continues to find ways for scientists to further speed the process of protein structure determination."

The SBC at Argonne, which has been providing data since 1998, is based at the Advanced Photon Source, this hemisphere's most brilliant source of X-rays for research. The center is a major macromolecular crystallography research facility, and provides two experimental stations and a laboratory for researchers from universities, other national laboratories and industry. Structure data is analyzed " a process that early on took months " and later deposited to the Protein Data Bank.

At the Advanced Photon Source, brilliant X-ray beams travel around a ring two-thirds of a mile in circumference " about the size of Chicago's Wrigley Field. The SBC operates two of the 70 available X-ray beamlines located around that ring. In research stations on those beamlines, X-rays pass though a rotating, tiny crystal of biological molecules. The scattering pattern is captured by a large digital camera. Researchers using computers and advanced software calculate the position of the atoms in the crystal, revealing its three-dimensional structure.

The structure provides insight into how the biomolecule performs its task. For example, biologists determined how bacteria communicate by a mechanism called quorum sensing using the TraR protein to activate genes of an agricultural pathogen that causes tumors in plants. Bacteria release and sense chemical signals known as pheromones. The pheromones are embedded within the protein until amino acids critical to gene copying are released into the butterfly-shaped body of TraR. This information may be used to manipulate this communication to aid helpful bacteria or thwart harmful bacteria.

The SBC at Argonne has been home to the world's most productive structural biology beamline since 1998. Joachimiak credits the high productivity, quality and efficiency to the powerful X-rays beams at the APS and advances in technology, automation and software. "They allow us to deliver the greatest detail to scientists, and to do it quickly and efficiently," he said.

"It is also a reflection of the quality of the scientific team that Joachimiak has assembled," said Argonne Biosciences Director Lee Makowski. "These scientists are available around the clock to help visiting scientists from all over the world to collect data from their protein crystals."

The powerful X-ray beams provide very fast data collection. Entire data sets can be captured in minutes compared to hours and days at other facilities. The SBC provides such a high level of detail and resolution that individual atoms can be observed.

Colleagues Wladek Minor at the University of Virginia and Zbyszek Otwinowski at the University of Texas Southwestern Medical Center worked with SBC operators to automate the many computer steps needed to convert X-ray diffractions images of the protein crystal into a 3-D image " cutting the solution time from months to minutes.

Argonne SBC staff are continually making improvements. Nearly two-thirds of the 1,000 structures have been determined in the past three years. "We are committed," said Joachimiak, "to modernize the facility and expand its capabilities to maintain its leadership in structural biology for the community."

The SBC is a user facility supported by DOE's Office of Science; researchers are chosen through a peer-reviewed proposal process and come from DOE, the National Institutes of Health, the National Science Foundation, universities and industry.