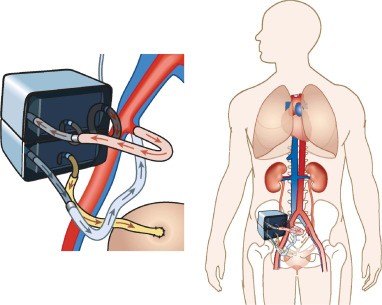 Newswise — Creating an artificial implantable kidney would be an epic advance in medicine and could address a chronic shortage of donor kidneys needed for transplant. Researchers have been at this quest for the past 15 years and keep coming upon one extremely knotty problem: how to keep the blood flowing smoothly through the artificial device without clotting. In such devices, as blood platelets respond to mechanical forces, they have a natural tendency to clot, causing a device malfunction.

To surmount this problem, recipients of Quantum Awards from the National Institute of Biomedical Imaging and Bioengineering (NIBIB) combined rare expertise in artificial kidney development and in computer simulation of blood flow, in a study in the Jan. 16, 2018, advance online issue of the Journal of Biomechanics.

While dialysis saves thousands, if not millions, of lives each year, it is not an ideal solution for kidney disease. Instead of continuous blood filtration, which keeps blood chemistry within a healthy range, dialysis results in ultra-cleansed and nutrient-depleted blood, which becomes gradually more toxic until the following dialysis treatment.

An artificial kidney would provide the benefit of continuous blood filtration. It would reduce kidney disease illness and increase the quality of life for patients. While researchers have made progress on wearable models, to make the device implantable—driven by the body’s own blood flows—the clotting problem would need to be resolved.

Kidney disease can cause kidneys to fail and toxins to build up in the blood. Kidney failure affects more than 660,000 people per year in the United States and contributes to 89,000 deaths.

Some people with kidney failure are fortunate enough to receive a transplanted donor kidney. Of the 100,000 people each year on the transplant waiting list, just 18,000 receive a donor kidney.  A stop-gap measure for patients under these life-threatening conditions is dialysis, a way to process the blood through an external filtration system.

“As developers of this technology know all too well, it is especially frustrating to deal with blood clots, which can both plug up the device, making in useless, and cause dangers to other parts of the body where blood flow would be compromised,” said Rosemarie Hunziker, Director of the NIBIB program in Tissue Engineering and Regenerative Medicine. “A clot that migrates to the heart could cause a heart attack; it could cause a stroke if it travelled to the brain.”

The experimental device is designed to accommodate up to a liter of blood per minute, filtering it through an array of silicon membranes. The filtered fluid contains toxins, water, electrolytes, and sugars. The fluid then undergoes a second stage of processing in a bioreactor of lab-grown cells of the type normally lining the tubules of the kidney. These cells reabsorb most of the sugars, salts, and water back into the bloodstream. The remainder becomes urine that is directed to the bladder and out of the body.

Much of the technology to implement this complex process exists, some of it developed by Roy and Fissell under previous funding from the NIBIB Quantum Award program.  One of the remaining challenges is for researchers to integrate the various innovations into one functional, compact—and thus implantable—device.

In the newly published work, the UCSF-Vanderbilt team collaborated with co-author Danny Bluestein, Ph.D., professor of biomedical engineering at the State University of New York, Stony Brook, who also is a Quantum Award grantee. In 2010, NIBIB awarded Bluestein’s laboratory a grant to study thromboresistance—the prevention of clotting in circulating blood. Bluestein’s group used the technique to study cardiovascular implant devices, such as artificial heart valves, as well as the device used in surgery when temporarily bypassing heart circulation.

Roy and Fissell first heard about Bluestein’s methodology, called device thrombogenicity emulation (DTE), at a 2014 meeting at NIBIB for Quantum Award grantees. The Bluestein DTE methodology quantifies flow patterns and stressors that develop during the blood flow. During Bluestein’s description of DTE, Roy and Fissell immediately saw the potential for applying his theories to their artificial kidney design.  Appropriate computer simulation could shave years or even decades off the design process for the artificial kidney and produce a device with a well analyzed and tested safety profile for platelet activation and subsequent clot formation.

“Platelets become activated, and initiate blood clotting in response to the severity of stress forces, as well as to the amount of time the platelets are circulating through the device,” Bluestein said. Bluestein’s simulation methodology—first developed to numerically predict the accumulation of stress on platelets within devices that support circulation in heart failure patients—was readily adaptable to the fluid dynamics aspects of the artificial kidney.

The researchers generated simulation and optimization results for two device designs that each channel blood through the artificial kidney filter system. Through simulation, they calculated that an individual platelet may flow through the artificial kidney as many as 1,000 times, accumulating stress and increasing the tendency to clot with each pass. One design distributes blood through parallel channels that pass across multiple layers of filtering membranes. The other channels blood back and forth through a single serpentine path.

Simulation results tipped in favor of the parallel flow system, particularly with respect to the condition of blood platelets after repeated circulation within the filtration systems. However, both designs met the researchers’ predetermined criteria for the uniform flow of blood through the devices and accumulation of shear stress forces on the platelets against the walls of the device flow channels. Therefore, the researchers plan to test both implant designs in prospective experiments in pigs. Additional designs could be tested in the future.

“I am happy that they decided to adopt our methodology, so its effectiveness could be demonstrated in a very different type of device,” Bluestein said. “Blood clotting is the major clinical problem that can occur because of flow-induced stresses that exist in all these devices.”

The simulation approach has accelerated the project by saving on animal experimentation and offering a viable alternative to examine the pros and cons of different devices that contact blood. “To do that in animal studies is time consuming, expensive, and at some level you never know if it is going to work out—because animal blood is not the same as human blood,” Roy said. “We ended up taking advantage of the extensive suite of work done by Dr. Bluestein and his colleagues and applied methodologies in computational fluid dynamics to help us analyze our designs.”

Will the device have all the functions of a native kidney? “No,” Roy said. “But the goal is for it to perform the functions that are critical, and to be a device that, once implanted, will allow a patient to eat and drink freely, have mobility, better health overall, and unlike a transplant, not require immunosuppressant drugs.”

Hunziker applauded the collaboration among recipients of NIBIB Quantum Award—a program to bring new technologies to bear on big, intractable problems in medicine. “Seeing independently funded teams self-assemble to leverage their quantum innovations is extremely gratifying,” she said. “The collaboration allows the artificial kidney development to accelerate via effective predictive modeling, combined with a thorough capability to manipulate biomaterials and a deep knowledge of kidney pathophysiology.”