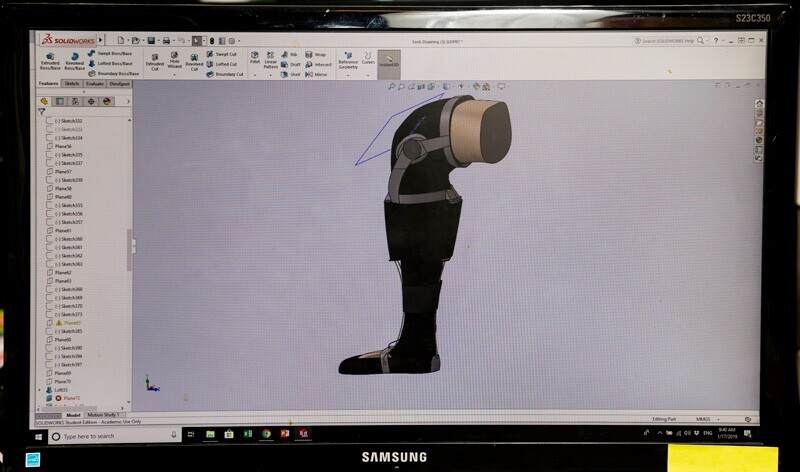 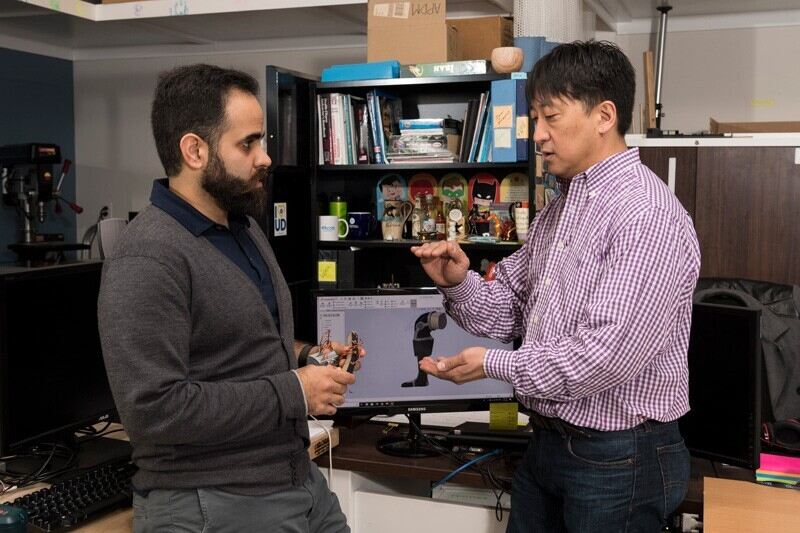 Ahad Behboodi, a UD doctoral candidate and the project principal investigator, and Prof. Samuel Lee discuss how the artificial muscle will function in the proposed medical device. 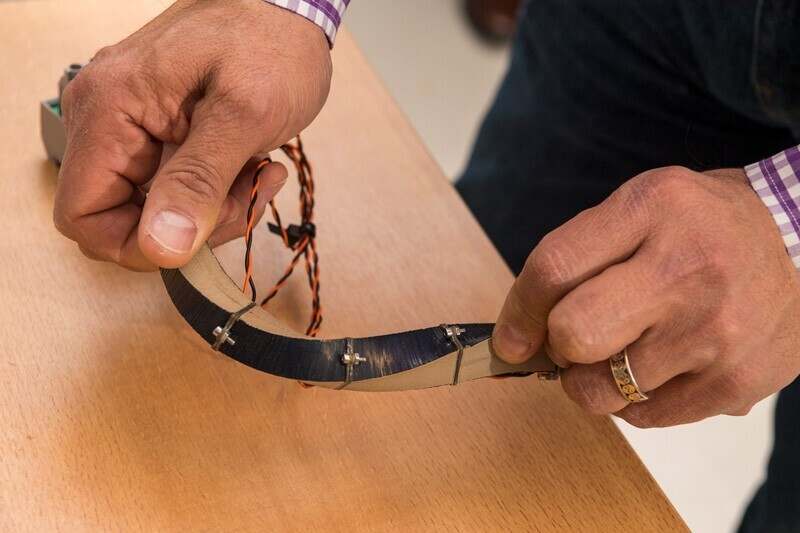 The artificial muscle shown is flexible and uses “smart materials” to mimic the function of the body’s skeletal muscle. Incorporated into a wearable device, the artificial muscle can help researchers increase the wearer’s degrees of freedom in movement.

Newswise — A team of researchers from the University of Delaware has received nearly $200,000 in start-up funding to develop a motorized ankle foot device for children with cerebral palsy (CP) that includes a novel artificial muscle.

Made from off-the-shelf elastic materials, these artificial muscles closely mimic the function of the body's skeletal muscle and can help children with CP that struggle to complete a range of motion under their own power. The device is lightweight, compact and noiseless, too, reducing the size of the orthosis needed while increasing the wearer's degree of freedom in movement -- a vast improvement over heavier, more rigid technologies.

Cerebral palsy (CP) is the most common motor disorder in pediatric populations. One in 323 children in the United States is diagnosed with CP, with the majority needing multiple devices over their lifetime to improve their mobility, according to the Cerebral Palsy Alliance Research Foundation.

The QED grant was awarded by the University City Science Center in Philadelphia. QED is short for "quod erat demonstrandum," a Latin phrase meaning proven as demonstrated.

The team from UD's College of Health Sciences is among four teams selected for funding from among 50 applicants from 12 institutions in the QED Proof-of-Concept Program, designed to help researchers commercialize their work. The grant, equally funded through the QED program and UD, will be used to develop a prototype of the medical device. A second team led by UD bioengineer Lucas Lu, who is working on a device for detecting circulating tumor cells, also was a finalist in the competition.

The funded project will be led by Ahad Behboodi, a doctoral candidate in UD's biomechanics and movement science program and the project's principal investigator. Project co-PI's include Samuel Lee, Behboodi's advisor and associate professor in the Department of Physical Therapy; Martha Hall, director of the Innovation for Design Lab; Elisa Arch, assistant professor in the Department of Kinesiology and Applied Physiology; and Prabhpreet Gill, licensing associate in the University's Tech Transfer Office, which is housed in the Office of Economic Innovation and Partnerships (OEIP).

The UD team was encouraged to compete for the QED grant by Gill and Joy Goswami, assistant director of Technology Transfer at UD. "Gill and Joy have really pushed us and helped us think beyond the science to develop a product that can benefit people," said Lee.

Gill and Goswami worked closely with the research team throughout the program's selection process, advising and assisting with the required documentation and presentations. Over the 12-month grant period, the UD research team will continue to receive business support from OEIP, as well as customized coaching from industry experts.

"As technology transfer professionals, one of our key roles is to identify early stage technologies and facilitate the translation process to build real-world solutions," Gill said. "We are here to bridge the gap between research and innovation. This QED grant is the beginning of our journey towards commercializing this technology and we have a strong team to make that happen."

The main goal of orthotic devices for children with CP is to increase or maintain mobility and independence. Traditional technologies, however, typically include a rigid plastic shell that holds the foot in a neutral position. While this keeps the ankle and foot stable, it doesn't allow for movement, which can cause muscles to weaken and atrophy from disuse.

This is where the UD research team's proposed device is different.

"Having an active device that can assist children with CP potentially can minimize this atrophy, because now the muscle is going through a range of motion," Lee said.

For example, if a child needs help lifting her toes in order for her foot to clear the ground as she walks, the device can assist the front calf muscles to lift the ankle up. The researchers said they can imagine the brace being used as an exercise device, too, where the artificial muscle might resist against the child's movements to strengthen or stretch muscles, or increase range of motion.

"For now, the device can only assist the wearer's own muscle contractions but we are able to customize where we put the force to change the movement," said Behboodi. "In the future, we may add functional electrical stimulation technology, which is a major area of research in Dr. Lee's lab, to also trigger muscles, when needed. This would improve the timing and power of the muscle's activation, thereby strengthening the muscle and improving the user's walking coordination."

Inspiration for the wearable ankle-foot device grew out of Behboodi's doctoral work with Lee, which focused on creating an artificial muscle powered exoskeleton for the upper extremities of children with limited ability to lift their arms. The pair also had developed a method for decoding the individual walking cycle of children with CP in order to understand when and where assistive devices could help activate specific muscles, so creating a lower-extremity device was a natural extension of this work.

Behboodi and Lee enlisted the help of Hall, whose expertise is in designing wearable devices, and Arch, a biomechanical engineer and prosthetics/orthotics designer, to help bring the device to life. The research team currently is building components of the artificial muscle and refining the prototype's design. In terms of overall design, Hall explained that it's important to create something that is as real-world as possible.

"We must think about what is functional, comfortable and acceptable for children," Hall said. "If we create something cool in the lab and it's not really useful to a child outside the lab setting, it's not going to be used."

While Hall and Arch work on the look and feel of the wearable device, Behboodi and Lee are finalizing the computer software that operates the artificial muscle. Future work will involve validating the device on a mockup of an artificial leg and ankle to test the components together prior to testing and refinement with human subjects.

As the project advances, Gill and Goswami will continue to advise and assist the team with the development, marketing and funding of their device, including attracting the attention of investors and companies that may want to commercialize the technology.

"Our job doesn't end until the innovation advances to a final product and gets integrated into the market," said Goswami.

Caption: Ahad Behboodi, a UD doctoral candidate and the project principal investigator, and Prof. Samuel Lee discuss how the artificial muscle will function in the proposed medical device.

Caption: The artificial muscle shown is flexible and uses “smart materials” to mimic the function of the body’s skeletal muscle. Incorporated into a wearable device, the artificial muscle can help researchers increase the wearer’s degrees of freedom in movement.