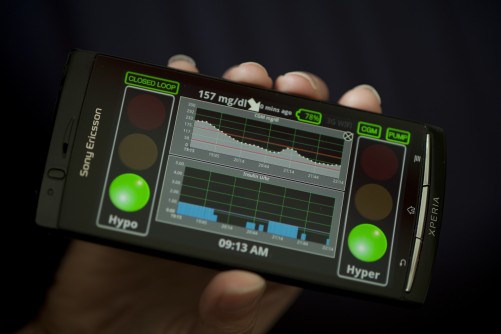 The artificial pancreas uses a reconfigured smart phone as part of its system.

Newswise — CHARLOTTESVILLE, Va., Nov. 18, 2013 – A high-tech project to turn an ordinary smart phone into an artificial pancreas that could transform the lives of people with type 1 diabetes has received a $3.4 million grant from the National Institutes of Health.

The money will fund a new network approach to artificial pancreas design using distributed computing between local and Cloud systems that will allow real-time adjustment of insulin delivery based on the individual’s needs. The grant will also fund three clinical trials at the University of Virginia and at Stanford University that will advance the project toward its final goal of offering people with type 1 diabetes – in which the body does not produce enough insulin – an automated way to monitor and regulate their blood sugar.

“This project approaches the artificial pancreas not as a single device but as a network of local and global services working seamlessly together towards the optimal control of diabetes,” said Boris Kovatchev, PhD, of the University of Virginia School of Medicine.

Managing Type 1 DiabetesThe artificial pancreas was developed at the School of Medicine by a team of researchers led by Kovatchev, the director of the UVA Center for Diabetes Technology, and Patrick Keith-Hynes, PhD. The device consists of a reconfigured smart phone running advanced algorithms, linked wirelessly with a blood glucose monitor and an insulin pump, and communicating with Internet services in real time.

The system’s developers intend for it to monitor and regulate blood-sugar levels automatically, report to a remote-monitoring site and link the user with assistance via telemedicine as needed. This would save users from having to stick their fingers to check their glucose levels multiple times a day and eliminate the need for countless syringes to inject insulin manually.

The physicians on the team – Bruce Buckingham, MD, of Stanford, and UVA’s Stacey Anderson, MD, and Sue Brown, MD – have tested the artificial pancreas system in successful outpatient trials in Virginia, California and in Europe.

Next StepsThe grant money from the National Institutes of Health will enable researchers at UVA to implement a new network approach to the artificial pancreas system known as the Diabetes Assistant (DiAs). Clinicians at UVA and Stanford will then test the artificial pancreas in both adults and children. Adult testing will be done at UVA, while Stanford will conduct the pediatric studies.

The Artificial Pancreas Project has brought together researchers from UVA, Stanford, the University of California, Santa Barbara, Montpellier University Hospital in France and the Universities of Padova and Pavia in Italy.

FOR REPORTERS: Kovatchev will be available for interviews from 9 a.m.-noon Monday, Nov. 18.