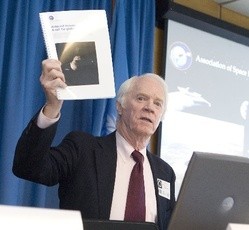 Former NASA Apollo astronaut, Russell Schweickart, is leader of an international Panel on Asteroid Threat Mitigation. Their report -- Asteroid Threats: A Call for Global Response -- is being briefed to United Nations officials, as well as leaders of space agencies around the world. 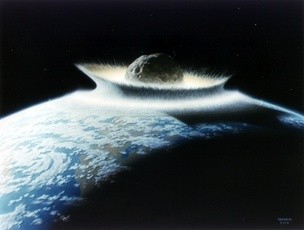 There is need for a world-wide response to Near Earth Objects (NEOs) and the implications for Earth. A new report flags the fact that, for the first time in our planet's 4.5-billion-year history, the technical capacities exist to prevent such cosmic collisions with Earth.

Newswise — A milestone-making report on the need to develop an international decision-making program to respond to the threat of Near Earth Objects (NEOs) has been briefed to United Nations officials in Vienna, Austria.

The report -- Asteroid Threats: A Call for Global Response -- was compiled by the international Panel on Asteroid Threat Mitigation, a group comprised of members of the Association of Space Explorers (ASE), as well as other experts tackling the NEO threat and repercussions to the Earth.

Former NASA Apollo astronaut, Russell Schweickart, is chairman of the panel and led the November 25 consultation with UN officials.

The briefing on the ASE-NEO report, its findings and implications, was given to a group of national representatives from the Permanent Missions to the United Nations in Vienna, in cooperation with One Earth Future Foundation.

The session was opened by Austrian Ambassador Helmut BÃ¶ck who, along with Ciro A. ArÃ©valo Yepes, the Chairman of the UN Committee on the Peaceful Uses of Outer Space (COPUOS), and Mazlan Othman, Head of the United Nations Office for Outer Space Affairs (UN-OOSA) sponsored the briefing.

The report is being submitted for consideration and subsequent action by the United Nations, with the goal to assist the international community in preventing loss of life and property resulting from an asteroid impact on Earth.

As the report underscores, there is need for a world-wide response to NEOs and the implications for Earth.

"Faced with such a threat, we are far from helpless. Astronomers today can detect a high proportion of Near Earth Objects and predict potential collisions with the Earth. Evacuation and mitigation plans can be prepared to cope with an unavoidable impact," the report explains.

"For the first time in our planet's 4.5-billion-year history, the technical capacities exist to prevent such cosmic collisions with Earth. The keys to a successful outcome in all cases are preparation, planning, and timely decision-making," the report states.

The Secure World Foundation (SWF) has a working relationship with the Association of Space Explorers and the Schweickart-chaired ASE Panel on Asteroid Threat Mitigation.

"We share a common interest in NEO governance. We also want to promote the results of their two-year process that has led to the report being submitted for consideration and subsequent action by the United Nations," explained Cynda Collins Arsenault, President of the Secure World Foundation.

"These briefings are very important in terms of the UN receiving our report. There is only one institution in the world that represents everybody," Schweickart said. To prevent an actual impact, he added, an international decision-making program, including necessary institutional requirements, must be agreed upon and implemented within the framework of the United Nations.

Schweickart also noted that briefings on the ASE-NEO report have been given to officials of several space agencies: The Indian Space Research Organization, the Canadian Space Agency, as well as NASA. Future briefings are being negotiated with the European Space Agency, China, Japan and Russia, he said.

At the close of the UN briefing in Vienna, former Austrian Ambassador Walther Lichem -- a member of the ASE International Panel on Asteroid Threat Mitigation -- made closing comments on the need for the UN "system" to deal seriously with the need for building the institutional capability to support the decision-making process ultimately required.

Reporter's Note: For access to the report, Asteroid Threats: A Call for Global Response, please go to: