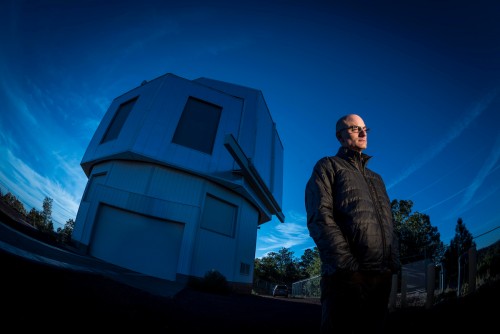 Newswise — What happens when a meteoroid the size of a house comes too close for comfort? When a 17-meter rock hurled through Earth’s atmosphere in 2013 and exploded mid-air above the Russian city of Chelyabinsk, it unleashed a shock wave equivalent to ten times the energy of the Hiroshima atomic bomb, shattering windows and blowing people off their feet.

Until recently, astronomers believed there were nearly 35 million small Near Earth Objects (NEOs) between 10 and 20 meters in diameter, whose orbits bring them close enough to Earth to pose potential impact hazards capable of causing widespread destruction. But the surprising results from a new study published in the Astronomical Journal by Northern Arizona University associate professor David Trilling find that there are approximately 3.5 million NEOs larger than 10 meters, about 90 percent of which are in the range of 10-20 meters.

Based on observations made using the Dark Energy Camera on the 4-meter Blanco telescope at the Cerro Tololo Inter-American Observatory, which sits high in the Chilean Andes, the study result lends new insights into the nature and origin of small meteoroids and helps us better understand the impact risk of these objects.

Although the study estimates the number of NEOS to be ten times smaller than previously thought, the perceived impact threat from these house-sized objects is not necessarily lower, warns Trilling.

“If house-sized NEOs are responsible for Chelyabinsk-like events, our results seem to say that the average impact probability of a house-sized NEO is actually ten times greater than the average impact probability of a large NEO. That sounds strange, but it may be telling us something interesting about the dynamical history of NEOs,” Trilling said.

Trilling speculates that the small NEOs are concentrated in orbiting bands of collisional debris that are more likely to impact Earth than larger NEOs, and that bands of debris could be produced when larger NEOs fragment into swarms of smaller boulders. He believes that testing this hypothesis is an interesting problem for the future.

At NAU, Trilling studies the evolution of the solar system and planetary systems. Working mostly with telescopes in Arizona, Hawaii and Chile, Trilling’s research focuses on the physical properties of asteroids and other small bodies in the solar system. At any given time, Trilling may be doing research for several projects funded by NASA and the National Science Foundation aimed at adding to our understanding of the asteroids with orbits near Earth