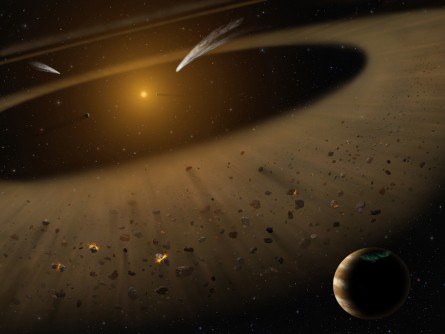 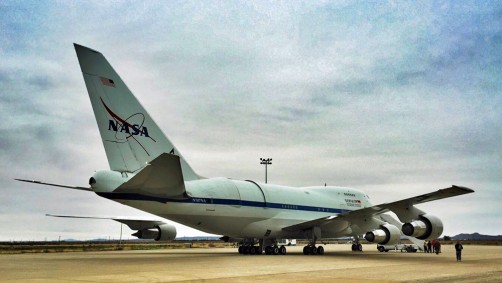 NASA's SOFIA aircraft before a 2015 flight to observe a nearby star. 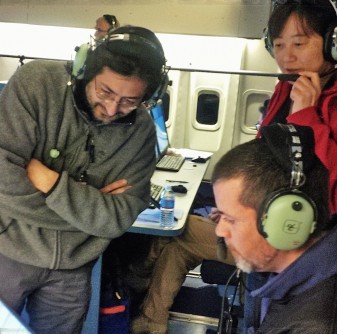 Newswise — AMES, Iowa – NASA’s SOFIA aircraft, a 747 loaded with a 2.5-meter telescope in the back and stripped of most creature comforts in the front, took a big U-turn over the Pacific west of Mexico.

The Stratospheric Observatory for Infrared Astronomy aircraft was just beginning the second half of an overnight mission on Jan. 28, 2015. It turned north for a flight all the way to western Oregon, then back home to NASA’s Armstrong Flight Research Center in Palmdale, California. Along the way, pilots steered the plane to aim the telescope at a nearby star.

Iowa State University’s Massimo Marengo and other astronomers were on board to observe the mission and collect infrared data about the star.

That star is called epsilon Eridani. It’s about 10 light years away from the sun. It’s similar to our sun, but one-fifth the age. And astronomers believe it can tell them a lot about the development of our solar system.

Marengo, an Iowa State associate professor of physics and astronomy, and other astronomers have been studying the star and its planetary system since 2004. In a 2009 scientific paper, the astronomers used data from NASA’s Spitzer Space Telescope to describe the star’s disk of fine dust and debris left over from the formation of planets and the collisions of asteroids and comets. They reported the disk contained separate belts of asteroids, similar to the asteroid and Kuiper belts of our solar system.

Subsequent studies by other astronomers questioned that finding.

A new scientific paper, just published online by The Astronomical Journal, uses SOFIA and Spitzer data to confirm there are separate inner and outer disk structures. The astronomers report further studies will have to determine if the inner disk includes one or two debris belts.

Kate Su, an associate astronomer at the University of Arizona and the university’s Steward Observatory, is the paper’s lead author. Marengo is one of the paper’s nine co-authors.

“This star hosts a planetary system currently undergoing the same cataclysmic processes that happened to the solar system in its youth, at the time in which the moon gained most of its craters, Earth acquired the water in its oceans, and the conditions favorable for life on our planet were set,” Marengo wrote in a summary of the project.

A major contributor to the new findings was data taken during that January 2015 flight of SOFIA. Marengo joined Su on the cold and noisy flight at 45,000 feet, above nearly all of the atmospheric water vapor that absorbs the infrared light that astronomers need to see planets and planetary debris.

Determining the structure of the disk was a complex effort that took several years and detailed computer modeling. The astronomers had to separate the faint emission of the disk from the much brighter light coming from the star.

“But we can now say with great confidence that there is a separation between the star’s inner and outer belts,” Marengo said. “There is a gap most likely created by planets. We haven’t detected them yet, but I would be surprised if they are not there. Seeing them will require using the next-generation instrumentation, perhaps NASA’s 6.5-meter James Webb Space Telescope scheduled for launch in October 2018."

That’s a lot of time and attention on one nearby star and its debris disk. But Marengo said it really is taking astronomers back in time.

“The prize at the end of this road is to understand the true structure of epsilon Eridani’s out-of-this-world disk, and its interactions with the cohort of planets likely inhabiting its system,” Marengo wrote in a newsletter story about the project. “SOFIA, by its unique ability of capturing infrared light in the dry stratospheric sky, is the closest we have to a time machine, revealing a glimpse of Earth’s ancient past by observing the present of a nearby young sun.” 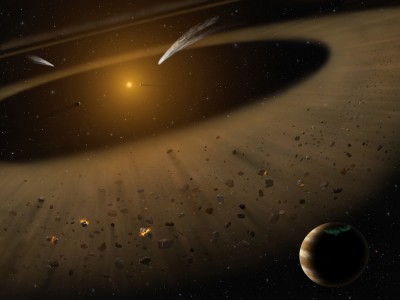 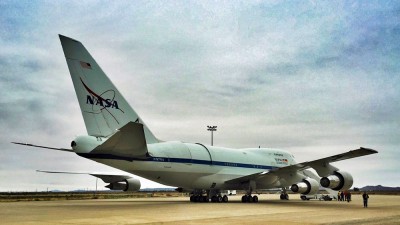 Caption: NASA's SOFIA aircraft before a 2015 flight to observe a nearby star. 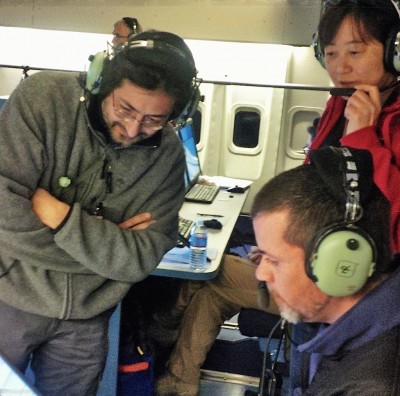