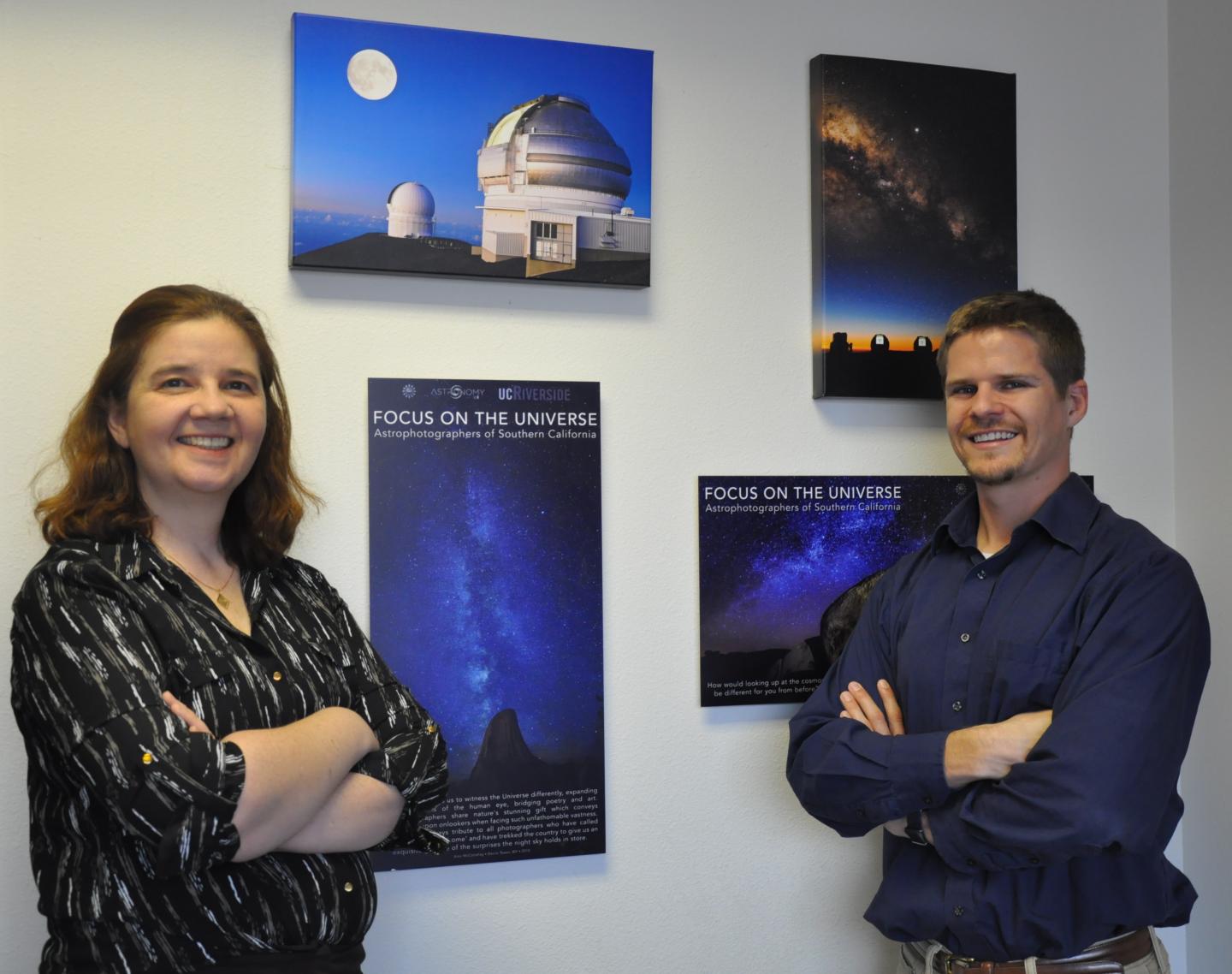 The three panels show, from left to right, what XMM-2599's evolutionary trajectory might be, beginning as a dusty star-forming galaxy, then becoming a dead galaxy, and perhaps ending up as a "brightest cluster galaxy," or BCG.

Newswise — RIVERSIDE, Calif. -- An international team of astronomers led by scientists at the University of California, Riverside, has found an unusual monster galaxy that existed about 12 billion years ago, when the universe was only 1.8 billion years old.

Dubbed XMM-2599, the galaxy formed stars at a high rate and then died. Why it suddenly stopped forming stars is unclear.

The team used spectroscopic observations from the W. M. Keck Observatory's powerful Multi-Object Spectrograph for Infrared Exploration, or MOSFIRE, to make detailed measurements of XMM-2599 and precisely quantify its distance.

"In this epoch, very few galaxies have stopped forming stars, and none are as massive as XMM-2599," said Gillian Wilson, a professor of physics and astronomy at UCR in whose lab Forrest works.  "The mere existence of ultramassive galaxies like XMM-2599 proves quite a challenge to numerical models. Even though such massive galaxies are incredibly rare at this epoch, the models do predict them. The predicted galaxies, however, are expected to be actively forming stars. What makes XMM-2599 so interesting, unusual, and surprising is that it is no longer forming stars, perhaps because it stopped getting fuel or its black hole began to turn on. Our results call for changes in how models turn off star formation in early galaxies."

The research team found XMM-2599 formed more than 1,000 solar masses a year in stars at its peak of activity -- an extremely high rate of star formation. In contrast, the Milky Way forms about one new star a year.

"XMM-2599 may be a descendant of a population of highly star-forming dusty galaxies in the very early universe that new infrared telescopes have recently discovered," said Danilo Marchesini, an associate professor of astronomy at Tufts University and a co-author on the study.

The evolutionary pathway of XMM-2599 is unclear.

"We have caught XMM-2599 in its inactive phase," Wilson said. "We do not know what it will turn into by the present day. We know it cannot lose mass. An interesting question is what happens around it. As time goes by, could it gravitationally attract nearby star-forming galaxies and become a bright city of galaxies?"

Co-author Michael Cooper, a professor of astronomy at UC Irvine, said this outcome is a strong possibility.

"Perhaps during the following 11.7 billion years of cosmic history, XMM-2599 will become the central member of one of the brightest and most massive clusters of galaxies in the local universe," he said. "Alternatively, it could continue to exist in isolation. Or we could have a scenario that lies between these two outcomes."

The team has been awarded more time at the Keck Observatory to follow up on unanswered questions prompted by XMM-2599.

"We identified XMM-2599 as an interesting candidate with imaging alone," said co-author Marianna Annunziatella, a postdoctoral researcher at Tufts University. "We used Keck to better characterize and confirm its nature and help us understand how monster galaxies form and die. MOSFIRE is one of the most efficient and effective instruments in the world for conducting this type of research."

Caption: The three panels show, from left to right, what XMM-2599's evolutionary trajectory might be, beginning as a dusty star-forming galaxy, then becoming a dead galaxy, and perhaps ending up as a "brightest cluster galaxy," or BCG.