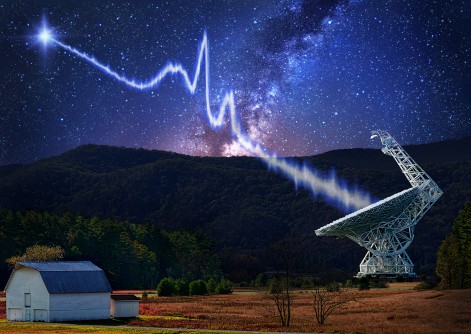 Newswise — Using two of the world’s largest radio telescopes, an international team of astronomers has gained new insights into the extreme home of a mysterious source of cosmic radio bursts. The discovery suggests that the source of the radio emission lies near a massive black hole or within an extremely powerful nebula, and may help shed light on what is causing these strange bursts.

The team presented their findings at the American Astronomical Society’s winter meeting (#AAS231) in Washington, D.C.  The results are presented in the journal Nature.

Using data from the Arecibo Observatory in Puerto Rico and the Green Bank Telescope in West Virginia, researchers have shown that the radio bursts from an object known as FRB121102 have a property known as polarization, and are “twisted” through a process called Faraday rotation. “I couldn’t believe my eyes when I first saw the data. Such extreme Faraday rotation is unprecedented,” says Jason Hessels of the University of Amsterdam and ASTRON (Netherlands Institute for Radio Astronomy), the leader of the team.

Faraday rotation occurs when polarized light travels through a strongly magnetized, hot gas known as plasma. Faraday rotation this strong has not been found anywhere else in the Universe, though the conditions near the black hole that lies at the center of our own Milky Way galaxy come close. This leads researchers to propose that FRB 121102 could be located near a massive black hole of its own, or embedded within the remains of a dead star.

FRB121102 is an example of a fast radio burst (FRB) – a mysterious and very short flash of radio waves emanating from deep in extragalactic space. The home galaxy of FRB 121102 is located 3 billion light-years from Earth; at this distance, the bursts must be nearly 100 million times more powerful than the Sun to be seen from Earth. The home galaxy of this FRB was reported in 2017; it was discovered with the help of the NSF’s Karl G. Jansky Very Large Array.

The cause of FRBs is one of the biggest mysteries in astronomy today. “FRB 121102 was already unique because it repeats, which hasn’t yet been observed in any other FRBs; now the huge Faraday rotation we have detected singles it out yet again. We’re curious as to whether these two unique aspects are linked,” says Daniele Michilli, a PhD candidate at the University of Amsterdam and ASTRON (Netherlands Institute for Radio Astronomy).

Key to the discovery was detecting the bursts at a higher radio frequency than ever before.

“At the Arecibo Observatory, we developed a new observing setup and additional hardware that allowed us to observe at these higher frequencies,” says Andrew Seymour, staff astronomer at the National Astronomy and Ionosphere Center, which operates Arecibo. “What’s more, one of the bursts we detected lasted less than 30 microseconds. Such a short duration argues that the bursts originate from a neutron star in an extreme environment of magnetized plasma,” he adds.

“Our partners in the Breakthrough Listen project were able to use the Green Bank Telescope and a fantastic new instrument that they built to observe this source over the widest range of radio frequencies to-date, confirming what had been seen at Arecibo Observatory. It’s such a surprising result, so this was a really important step in convincing everyone that this unprecedented degree of Faraday rotation is real,” explains Ryan Lynch, a staff scientist at the Green Bank Observatory.

As a fun way of visualizing the shapes of the bursts, team member Anne Archibald (University of Amsterdam) has made 3D printed models, which show the brightness of each burst as a function of both time and the observed radio frequency.  These designs are freely available for download at https://www.thingiverse.com/thing:2723399.

In future research, the astronomers hope to distinguish between the two leading hypotheses – either a neutron star near a black hole or one embedded in a powerful nebula – or possibly other, more exotic interpretations, by monitoring how the Faraday rotation and other properties of the bursts change with time. With a number of wide-field radio telescopes now coming online, more such sources are expected to be discovered in the coming year, and astronomers are poised to answer more fundamental questions about FRBs.

The Green Bank Obsevatory is a facility of the National Science Foundation operated under a cooperative agreement by Associated Universities, Inc.