Astronomers Reveal Secrets of Most Distant Supernova Ever Detected 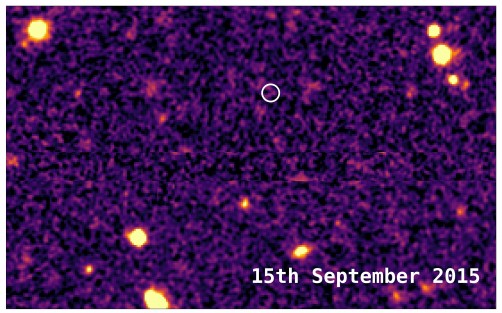 M Smith and the DES collaboration

Area of sky before the supernova was detected. 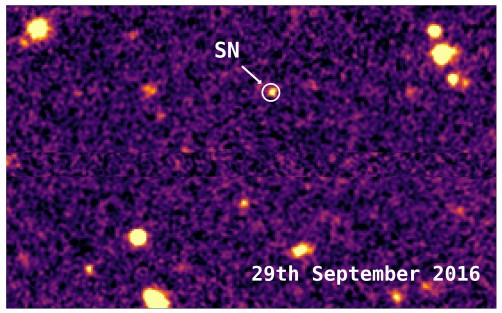 M Smith and the DES collaboration

Area of sky after the supernova was detected.

Newswise — An international team of astronomers led by the University of Southampton has confirmed the discovery of the most distant supernova ever detected – a huge cosmic explosion that took place 10.5 billion years ago, or three-quarters the age of the Universe itself.

The exploding star, named DES16C2nm, was detected by the Dark Energy Survey (DES), an international collaboration to map several hundred million galaxies in order to find out more about dark energy – the mysterious force believed to be causing the accelerated expansion of the Universe.

As detailed in a new study published in The Astrophysical Journal, light from the event has taken 10.5 billion years to reach Earth, making it the oldest supernova ever discovered and studied. The Universe itself is thought to be 13.8 billion years old.

A supernova is the explosion of a massive star at the end of its life cycle. DES16C2nm is classified as a superluminous supernova (SLSN), the brightest and rarest class of supernovae, first discovered ten years ago, thought to be caused by material falling onto the densest object in the Universe – a rapidly rotating neutron star newly formed in the explosion of a massive star.

Lead author of the study Dr Mathew Smith, of the University of Southampton, said: “It’s thrilling to be part of the survey that has discovered the oldest known supernova. DES16C2nm is extremely distant, extremely bright, and extremely rare – not the sort of thing you stumble across every day as an astronomer.

“As well as being a very exciting discovery in its own right, the extreme distance of DES16C2nm gives us a unique insight into the nature of SLSN.

“The ultraviolet light from SLSN informs us of the amount of metal produced in the explosion and the temperature of the explosion itself, both of which are key to understanding what causes and drives these cosmic explosions.”

Study co-author Professor Mark Sullivan, also of the University of Southampton, said: “Finding more distant events, to determine the variety and sheer number of these events, is the next step.

“Now we know how to find these objects at even greater distances, we are actively looking for more of them as part of the Dark Energy Survey.”

DES16C2nm was first detected in August 2016, and its distance and extreme brightness confirmed in October that year using three of the world’s most powerful telescopes – the Very Large Telescope and the Magellan, in Chile, and the Keck Observatory, in Hawaii.

Study co-author Bob Nichol, Professor of Astrophysics at the University of Portsmouth, commented: “Such supernovae were not thought of when we started DES over a decade ago. Such discoveries show the importance of empirical science; sometimes you just have to go out and look up to find something amazing.”

More than 400 scientists from over 25 institutions worldwide are involved in the DES, a five-year project which began in 2013.

The collaboration built and is using an extremely sensitive 570-megapixel digital camera, DECam, mounted on the Blanco 4-meter telescope at Cerro Tololo Inter-American Observatory, high in the Chilean Andes, to carry out the project.

Over five years (2013-2018), the DES collaboration is using 525 nights of observation to carry out a deep, wide-area survey to record information from 300 million galaxies that are billions of light-years from Earth.

The survey is imaging 5,000 square degrees of the southern sky in five optical filters to obtain detailed information about each galaxy. A fraction of the survey time is used to observe smaller patches of sky roughly once a week to discover and study thousands of supernovae and other astrophysical transients.

1)         The paper, Studying the ultraviolet spectrum of the first spectroscopically confirmed supernova at redshift two, is published in The Astrophysical Journal. DOI: 10.3847/1538-4357/aaa126

A copy is available on request from the University of Southampton press office.

2) Dr Mathew Smith is available for interview. Please contact the media relations team at the University of Southampton to request an interview.

3)        The University of Southampton drives original thinking, turns knowledge into action and impact, and creates solutions to the world’s challenges. We are among the top one per cent of institutions globally. Our academics are leaders in their fields, forging links with high-profile international businesses and organisations, and inspiring a 24,000-strong community of exceptional students, from over 135 countries worldwide. Through our high-quality education, the University helps students on a journey of discovery to realise their potential and join our global network of over 200,000 alumni. www.southampton.ac.uk

4)        The University of Portsmouth is a leading modern university with a strong reputation for innovative teaching and globally significant research and innovation. It ranks in the top 500 universities and the top 150 under 50 in the world according to the Times Higher Education rankings. The University is also in the top 50 in the Guardian’s 2017 league table. The University is active in research and innovation activities across a broad range of subjects including science, technology, humanities, business and creative industries. 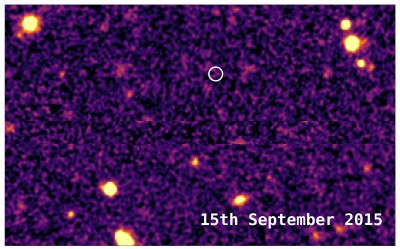 Caption: Area of sky before the supernova was detected. 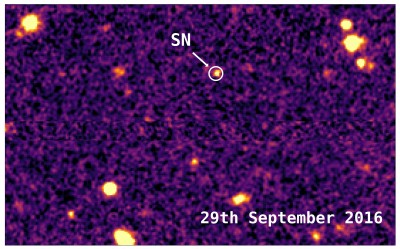 Caption: Area of sky after the supernova was detected.