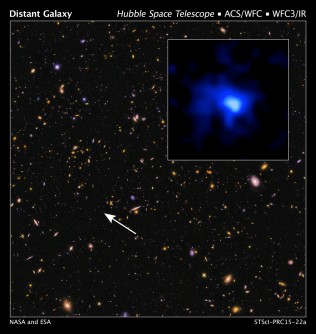 NASA, ESA, P. Oesch and I. Momcheva (Yale University), and the 3D-HST and HUDF09/XDF Teams

This is a Hubble Space Telescope image of the farthest spectroscopically confirmed galaxy observed to date (inset). It was identified in this Hubble image of a field of galaxies in the CANDELS survey (Cosmic Assembly Near-infrared Deep Extragalactic Legacy Survey). NASA's Spitzer Space Telescope also observed the unique galaxy. The W. M. Keck Observatory was used to obtain a spectroscopic redshift (z=7.7), extending the previous redshift record. Measurements of the stretching of light, or redshift, give the most reliable distances to other galaxies. This source is thus currently the most distant confirmed galaxy known, and it appears to also be one of the brightest and most massive sources at that time. The galaxy is located in the constellation Bootes and existed over 13 billion years ago. The near-infrared image of the galaxy (inset) has been colored blue as suggestive of its young, and hence very blue, stars. The CANDELS field is a combination of visible-light and near-infrared exposures.

Newswise — An international team of astronomers, led by Yale University and University of California scientists, pushed back the cosmic frontier of galaxy exploration to a time when the universe was only 5 percent of its present age of 13.8 billion years. The team discovered an exceptionally luminous galaxy more than 13 billion years in the past and determined its exact distance from Earth using the combined data from NASA's Hubble and Spitzer space telescopes, and the Keck I 10-meter telescope at the W. M. Keck Observatory in Hawaii. These observations confirmed it to be the most distant galaxy currently measured, setting a new record. The galaxy existed so long ago, it appears to be only 100 million years old.

The galaxy, EGS-zs8-1, was originally identified based on its particular colors in images from Hubble and Spitzer and is one of the brightest and most massive objects in the early universe. "It has already grown more than 15 percent of the mass of our own Milky Way today," said Pascal Oesch, lead author of the study from Yale University, New Haven, Connecticut. "But it had only 670 million years to do so. The universe was still very young then." The new distance measurement also enabled the astronomers to determine that EGS-zs8-1 was still forming stars very rapidly, about 80 times faster than our Milky Way galaxy today (which has a star formation rate of one star per year).

Only a handful of galaxies currently have accurate distances measured in this very early universe. "Every confirmation adds another piece to the puzzle of how the first generations of galaxies formed in the early universe," said Pieter van Dokkum of Yale, second author of the study. "Only the most sensitive telescopes are powerful enough to reach to these large distances." The discovery was only possible thanks to the relatively new Multi-Object Spectrometer For Infra-Red Exploration (MOSFIRE) instrument on the Keck I telescope, which allows astronomers to efficiently study several galaxies at the same time.

Measuring galaxies at these extreme distances and characterizing their properties is a main goal of astronomers over the next decade. The observations see EGS-zs8-1 at a time when the universe was undergoing very important changes: the hydrogen between galaxies was transitioning from an opaque to a transparent state. "It appears that the young stars in the early galaxies like EGS-zs8-1 were the main drivers for this transition, called reionization," said study co-author, Rychard Bouwens of the Leiden Observatory, Leiden, Netherlands.

These new Hubble, Spitzer, and Keck observations together give a new glimpse into the nature of the infant universe. They confirm that massive galaxies already existed early in the history of the universe, but that their physical properties were very different from galaxies seen around us today. Astronomers now have very strong evidence that the peculiar colors of early galaxies seen in the Spitzer images originate from a very rapid formation of massive, young stars, which interacted with the primordial gas in these galaxies.

The new observations underline the very exciting discoveries that NASA's James Webb Space Telescope will enable when it is launched in 2018. In addition to pushing the cosmic frontier to even earlier cosmic times, the Webb telescope will be able to dissect the infrared galaxy light of EGS-zs8-1 seen with the Spitzer Space Telescope and will provide astronomers with much more detailed insights into its gas properties. "Our current observations indicate that it will be very easy to measure accurate distances to these distant galaxies in the future with the James Webb Space Telescope," said Garth Illingworth of the University of California, Santa Cruz. "The result of Webb's upcoming measurements will provide a much more complete picture of the formation of galaxies at the cosmic dawn."

The team’s results will appear May 5, in the online edition of The Astrophysical Journal Letters.

For images and more information about Hubble, visit:

The Hubble Space Telescope is a project of international cooperation between NASA and the European Space Agency. NASA's Goddard Space Flight Center in Greenbelt, Maryland, manages the telescope. The Space Telescope Science Institute (STScI) in Baltimore, Maryland, conducts Hubble science operations. STScI is operated for NASA by the Association of Universities for Research in Astronomy, in Washington, D.C.

The Astrophysical Journal Letters online, May-2015