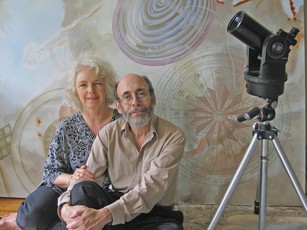 Astrophysicist Gregory Matloff with his wife, the artist C Bangs.

Newswise — New York City College of Technology (City Tech) Physics Professor Gregory L. Matloff and his artist wife, C Bangs, are working on projects that are as far out as you can get without actually leaving the planet.

The husband and wife duo, who share a brownstone with their two cats, appropriately named Gala (short for "Galaxy") and Bits (short for "Orbits") in the Bedford-Stuyvesant section of Brooklyn, are not the first couple to collaborate on things celestial. Others include the late astronomer Carl Sagan and his wife, Ann Druyan, who often worked together and helped to popularize science in the late 20th century.

Matloff and Bangs have collaborated for 20 years, with Bangs providing illustrations for Matloff's half dozen books and many more magazine and journal articles. Their latest work, Living Off the Land in Space (Copernicus & Praxis), co-authored with NASA's Les Johnson, is due in bookstores next month (January 2007). Targeted to both scientists and the general public, it looks at in-development propulsion systems that draw on the energy sources of the heavens themselves to propel spacecraft with little or no need for on-board fuel.

In addition to teaching at City Tech and serving as a Hayden Associate in astrophysics at the American Museum of Natural History, Matloff is a consultant with NASA's In-Space Propulsion (ISP) Technology Program, where he works on mission design and evaluates concepts involving solar sail, solar thermal, solar electric, nuclear electric, advanced chemical and other propulsion systems, with the ultimate goal of creating a solar sail for an eventual "Earthling relocation" project in anticipation of an increase in our sun's luminosity a billion years from now.

The sail, ideally a metallic monolayer of aluminum, titanium, beryllium, niobium or scandium with a thickness measured in billionths of a meter and driven by sunlight, would propel so-called "generation ships" carrying equipment, resources and additional necessities, as well as life itself, to other worlds.

C Bangs, the other half of the equation, is a painter with an MFA from Pratt Institute who has been teaching visionary arts concepts at SUNY Empire State College in Brooklyn since 1993. Her work, exhibited on four continents, can be seen in cyberspace on her website at www.cbangs.com.

She created the illustrations for her husband's The Starflight Handbook: A Pioneer's Guide to Interstellar Travel (co-authored with the late Eugene Mallove, former chief science writer at MIT), a book that helped establish interstellar travel as a subdivision of applied physics, and for the second edition of his Deep Space Probes. Her work has also appeared in Journal of the British Interplanetary Society, The Urban Astronomer and Telescope Power, among other publications. In addition, work she produced for NASA has been included in a workshop-proceedings volume and several NASA reports.

In addition to collaborating with Matloff, Bangs also worked with the late Dr. Evan Harris Walker, a pioneer of quantum consciousness theory, incorporating his equations into her paintings to fuse "the physics of consciousness, mythology and ancient spiritual ideas."

Bangs worked under a NASA grant to her husband in 2001 and as a summer faculty fellow at NASA's George C. Marshall Space Flight Center in Huntsville, Alabama, from 2002 through 2004. Her work involved creating a "technology demonstrator" of a rainbow hologram message plaque using her line drawings scanned into a computer, printed out on acetate and photographed with a laser, plus figures sculpted out of a plastic clay and then painted with acrylics.

The demonstrator contains six images -- female and male three-dimensional figures, two-dimensional line drawings, a diagram of our solar system and its position in the Milky Way, and equations pertaining to solar sail velocity and acceleration. These images are variations on the Pioneer 10 and Pioneer 11 Message Plaques already sent into space, and it is hoped that they can be understood by a technologically advanced alien intelligence if NASA or another space agency launches them. She hopes that a holographic message she designed for an interstellar solar sail -- based on work that she and Matloff did in 2001 -- may one day fly in space.

Bangs exhibited some recent paintings, the "Dying/Evolved Star" series, last spring at Danny Simmons' Corridor Gallery and the 1110 Gallery, both in Brooklyn. Copies of her holographic designs are on permanent display at the Marshall Space Flight Center's In-Space Propulsion Research Program, and she also hopes to donate a copy of the demonstration hologram, two of her sculpted figures and six of the holographic acetates to City Tech in honor of the College's upcoming 60th anniversary. "Solar sail technology is one of the most promising in-space propulsion systems," says Matloff, who credits his interest in space science to his early fascination with the science fiction of Isaac Asimov and Arthur C. Clarke, and a 13th birthday present of a telescope from his parents. "While 'sailing' on a beam of sunlight may sound like science fiction, the concept has been explored for more than half a century."

In the 1930s, Russian scientists proposed that a thin sheet of metal could be pushed along in space by the pressure of sunlight. Thirty years later, scientists observed that the orbits of Echo I and Echo II -- two hair-thin, balloon-like communications satellites 100 feet in diameter -- were changed by sunlight's pressure. On 1974's Mariner 10 probe to Mercury, solar radiation pressure on the spacecraft's solar panels was used to control its position. In the early 1990s, a test sail was deployed from the Mir space station then orbiting Earth. The Japanese Institute of Space and Astronautical Science successfully unfurled two test sails, "folded like origami," as Matloff describes them, in 2004.

NASA successfully deployed two 400-square-meter solar sails during ground testing in September 2005. Later that year, NASA Tech Briefs reported on a proposal by Matloff and Les Johnson for using large, lightweight solar sails embedded with electrodynamic tethers to propel robotic spacecraft to distant planets, and exploit those planets' magnetic fields to capture the spacecraft into orbit around them.

Bangs speaks of her time at NASA as "heartening" and of the agency as "a place where visionary ideas are common currency and where scientists are stretching the human potential. There is a huge amount of love and energy, dedication and passion in what they're doing. They all know that whether or not what they propose happens is not the point. They're trying to get their ideas out there, even if that's the best that happens."

Matloff continues to engage in research with the U.S. and Italy's space programs and is also working with a colleague, City Tech Physics Professor Lufeng Leng, on methods of monitoring the condition of a solar sail in flight. "An interstellar people-carrying sail will have to be 50 to 100 miles or more across," Matloff notes, "and technologies will need to be in place on board to make sure everything's in order." He expects that a space trial for a much smaller, robotic interstellar sail will take place around 2020, but as Bangs says, "When you work at NASA, you learn to be very patient."

Perhaps their cosmic shared interest, "science and art coming together in a visible way," as Bangs expresses it, is the key to how the couple manages to live and work together. They met on a blind double date -- and started talking about the Arecibo Observatory's giant radio telescope in Puerto Rico. When Matloff became director of a computer graphics center at Pratt Institute in the mid-1980s and opened it to alumni, Bangs became one of the center's computer artists. Her resulting work was displayed in U.S. and European galleries and is now in the permanent collections at Pratt and Pace University. The couple married in 1986.

They do argue, both confirm. "We certainly have our moments of heated disagreement, but it gives us a unified purpose and goal," Bangs says, "and that is the glue of the relationship." Matloff admits, "There's real fire in our relationship, but we have tremendous respect for each other and our professional areas are not too close. We sometimes edit each other's writing, and that can add sparks -- but in this case they're good ones. We're generally working from different hemispheres: C is very much tapped into the left and I, the right."

The largest public college of technology in New York State, New York City College of Technology of The City University of New York enrolls more than 13,000 students in 57 baccalaureate, associate and specialized certificate programs in the technologies of art and design, business, computer systems, engineering, entertainment, health care, hospitality, human services, the law-related professions, career and technology teacher education, and the liberal arts and sciences. Another 14,300 students enroll annually in adult education and workforce development programs, many of which lead to licensure and certification. Located at 300 Jay Street in Downtown Brooklyn, City Tech is at the MetroTech Center academic and commercial complex, convenient to public transportation.

Editors, please note that electronic images of C Bang's holograms and artwork are available upon request.