Newswise — A West Virginia University astrophysicist is among this year’s Sloan Fellows, scholars recognized as emerging leaders in science.

Sarah Burke-Spolaor, an assistant professor of astronomy, is one of 128 young faculty members from the U.S. and Canada to receive the competitive award.

“It is a fantastic honor to receive this. There have been so many scientists who have been awarded this fellowship, many I respect and know. Being in the same category as these people is just amazing,” Burke-Spolaor said. “It’s pleasing to be recognized as an emerging leader in physics.”

Burke-Spolaor’s research focuses on phenomena that change rapidly in the universe, especially fast radio bursts and gravitational waves. Fast radio bursts are bright, millisecond flashes of light that occur about every eight seconds in space, and gravitational waves are ripples of space-time created by massive black holes. Both phenomena were first detected by teams that included WVU researchers, in 2007 and 2016, respectively.

Following a recent discovery by the North American Nanohertz Observatory for Gravitational Waves Physics Frontiers Center that places scientists even closer to identifying new sources of gravitational waves, Burke-Spolaor plans to use the Sloan Fellowship funding to launch exploratory projects for the next phase of studying one of space’s most elusive mysteries.

“NANOGrav is in the process of detecting gravitational waves – soon, we expect, based on the hints of signals we are seeing grow in the data. We plan to go on and detect, then characterize, the giant black holes that we expect are making these signals,” said Burke-Spolaor, who is also part of WVU’s Center for Gravitational Waves and Cosmology. “The study of those black holes is what I’m really interested in. We’re now moving closer to the time when the direct study of the biggest black holes in the universe will be possible. This funding will allow me to pursue searches in the best data and make that era a reality.”

Through this fellowship, Burke-Spolaor plans to expand her work on the characterization of gravitational waves on an international scale through an expanded partnership with the International Pulsar Timing Array, another large-scale research collaboration.

“While NANOGrav is already involved with the International Pulsar Timing Array, I hope to use this funding to focus on internationalizing our data sets and making our science broader and stronger by working more closely with the international team,” she said. “As new telescopes come online in places like Europe, India, South Africa and China, more researchers can contribute. It’s a very exciting time for radio astronomy, and this funding really helps me to get involved in this international effort.”

Burke-Spolaor has authored or co-authored about 120 publications in her career and has received four significant grants since arriving at WVU in 2016. She previously held the prestigious Jansky Fellowship at the Very Large Array in New Mexico and was named a Canadian Institute for Advanced Research Azrieli Global Scholar in 2018.

“Dr. Burke-Spolaor is already a leader in the field of radio astronomy and has made groundbreaking discoveries helping to understand fast radio bursts and the sources of gravitational waves,” said D.J. Pisano, chair of the Department of Physics and Astronomy. “The entire department is proud of Dr. Burke-Spolaor's accomplishments, and we look forward to more to come in the future.”

Candidates are nominated by their fellow scientists, and winners are selected by independent panels of senior scholars on the basis of a candidate’s research accomplishments, creativity and potential to become a leader in their field. More than 1,000 people are nominated each year. The recipients receive a two-year, $75,000 award to support their research.

“There are not that many fellowships like this one, where the award can be used for many aspects of research. That is really important to opening up one’s research to new areas that are more creative and exploratory,” Burke-Spolaor said. “This allows me to get some new projects started that will lay the critical foundation of ground-breaking research in the coming decades.” 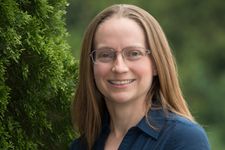