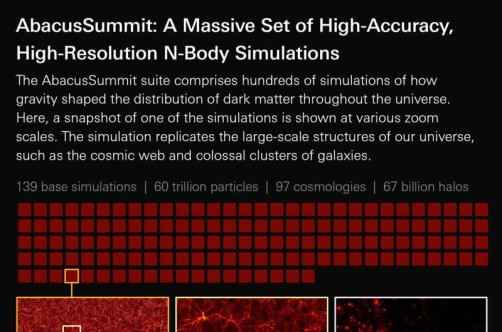 The AbacusSummit suite comprises hundreds of simulations of how gravity shaped the distribution of dark matter throughout the universe. Here, a snapshot of one of the simulations is shown at a zoom scale of 1.2 billion light-years across. The simulation replicates the large-scale structures of our universe, such as the cosmic web and colossal clusters of galaxies. 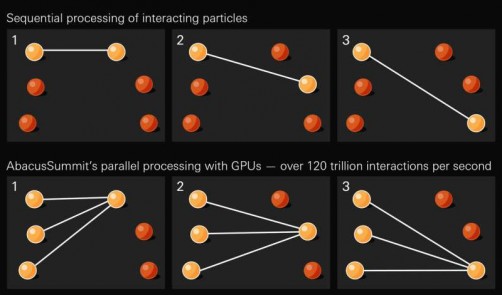 Abacus leverages parallel computer processing to drastically speed up its calculations of how particles move about due to their gravitational attraction. A sequential processing approach (top) computes the gravitational tug between each pair of particles one by one. Parallel processing (bottom) instead divides the work across multiple computing cores, enabling the calculation of multiple particle interactions simultaneously.

Newswise — Cambridge, MASS. – Collectively clocking in at nearly 60 trillion particles, a newly released set of cosmological simulations is by far the biggest ever produced.

The simulation suite, dubbed AbacusSummit, will be instrumental for extracting secrets of the universe from upcoming surveys of the cosmos, its creators predict. They present AbacusSummit in several papers published October 25 in the Monthly Notices of the Royal Astronomical Society.

AbacusSummit is the product of researchers at the Flatiron Institute’s Center for Computational Astrophysics (CCA) in New York City and the Center for Astrophysics | Harvard & Smithsonian. Made up of more than 160 simulations, it models how particles in the universe move about due to their gravitational attraction. Such models, known as N-body simulations, capture the behavior of the dark matter, a mysterious and invisible force that makes up 27 percent of the universe and interacts only via gravity.

“This suite is so big that it probably has more particles than all the other N-body simulations that have ever been run combined — though that’s a hard statement to be certain of,” says Lehman Garrison, lead author of one of the new papers and a CCA research fellow.

Garrison led the development of the AbacusSummit simulations along with graduate student Nina Maksimova and professor of astronomy Daniel Eisenstein, both of the Center for Astrophysics. The simulations ran on the U.S. Department of Energy’s Summit supercomputer at the Oak Ridge Leadership Computing Facility in Tennessee.

Several space surveys will produce maps of the cosmos with unprecedented detail in the coming years. These include the Dark Energy Spectroscopic Instrument (DESI), the Nancy Grace Roman Space Telescope, the Vera C. Rubin Observatory and the Euclid spacecraft. One of the goals of these big-budget missions is to improve estimations of the cosmic and astrophysical parameters that determine how the universe behaves and how it looks.

Scientists will make those improved estimations by comparing the new observations to computer simulations of the universe with different values for the various parameters — such as the nature of the dark energy pulling the universe apart.

“The coming generation of cosmological surveys will map the universe in great detail and explore a wide range of cosmological questions,” says Eisenstein, a co-author on the new MNRAS papers. “But leveraging this opportunity requires a new generation of ambitious numerical simulations. We believe that AbacusSummit will be a bold step for the synergy between computation and experiment.”

The decade-long project was daunting. N-body calculations — which attempt to compute the movements of objects, like planets, interacting gravitationally — have been a foremost challenge in the field of physics since the days of Isaac Newton. The trickiness comes from each object interacting with every other object, no matter how far away. That means that as you add more things, the number of interactions rapidly increases.

There is no general solution to the N-body problem for three or more massive bodies. The calculations available are simply approximations. A common approach is to freeze time, calculate the total force acting on each object, then nudge each one based on the net force it experiences. Time is then moved forward slightly, and the process repeats.

Using that approach, AbacusSummit handled colossal numbers of particles thanks to clever code, a new numerical method and lots of computing power. The Summit supercomputer was the world’s fastest at the time the team ran the calculations; it is still the fastest computer in the U.S.

Running N-body calculations using parallel processing requires careful algorithm design because an entire simulation requires a substantial amount of memory to store. That means Abacus can’t just make copies of the simulation for different nodes of the supercomputer to work on. The code instead divides each simulation into a grid. An initial calculation provides a fair approximation of the effects of distant particles at any given point in the simulation (which play a much smaller role than nearby particles). Abacus then groups nearby cells and splits them off so that the computer can work on each group independently, combining the approximation of distant particles with precise calculations of nearby particles.

"The Abacus algorithm is well matched to the capabilities of modern supercomputers, as it provides a very regular pattern of computation for the massive parallelism of GPU co-processors,” Maksimova says.

Thanks to its design, Abacus achieved very high speeds, updating 70 million particles per second per node of the Summit supercomputer, while also performing analysis of the simulations as they ran. Each particle represents a clump of dark matter with 3 billion times the mass of the sun.

“Our vision was to create this code to deliver the simulations that are needed for this particular new brand of galaxy survey,” says Garrison. “We wrote the code to do the simulations much faster and much more accurate than ever before.”

Eisenstein, who is a member of the DESI collaboration — which recently began its survey to map an unprecedented fraction of the universe — says he is eager to use Abacus in the future.

“Cosmology is leaping forward because of the multidisciplinary fusion of spectacular observations and state-of-the-art computing,” he says. “The coming decade promises to be a marvelous age in our study of the historical sweep of the universe.”

Additional co-creators of Abacus and AbacusSummit include Sihan Yuan of Stanford University, Philip Pinto of the University of Arizona, Sownak Bose of Durham University in England and Center for Astrophysics researchers Boryana Hadzhiyska, Thomas Satterthwaite and Douglas Ferrer. The simulations ran on the Summit supercomputer under an Advanced Scientific Computing Research Leadership Computing Challenge allocation.