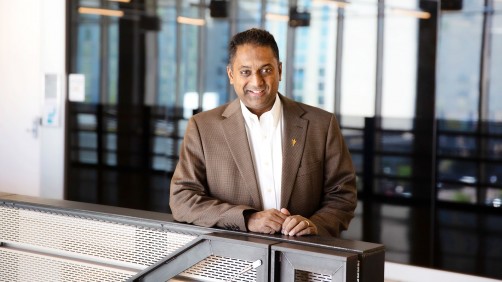 Samuel Ariaratnam, a professor in Heavy Construction in the Ira A. Fulton Schools of Engineering at Arizona State University, has been appointed by U.S. Secretary of Transportation Pete Buttigieg to the Technical Pipeline Safety Standards Committee, also known as the Gas Pipeline Advisory Committee. As a public member of the committee, Ariaratnam will play a role in ensuring pipelines that move important resources stay up and running across America.

Samuel Ariaratnam, professor of construction engineering in the Ira A. Fulton Schools of Engineering at Arizona State University, has been appointed by United States Secretary of Transportation Pete Buttigieg to the Technical Pipeline Safety Standards Committee, also known as the Gas Pipeline Advisory Committee, or GPAC.

GPAC is mandated by federal law and was established under the Federal Advisory Committee Act of 1972 to review the regulatory initiatives undertaken by the Pipeline and Hazardous Materials Safety Administration. GPAC members also determine the technical feasibility, reasonableness, cost effectiveness and practicality of those initiatives.

“I’m very honored by this role,” says Ariaratnam, who is the Beavers-Ames Chair in Heavy Construction in the School of Sustainable Engineering and the Built Environment, one of the seven Fulton Schools. “There are a lot of responsibilities, obviously, that come with it, but to me it’s about knowledge and asking the right questions.”

The committee, composed of 15 individuals representing public, industry and government entities, makes recommendations to stakeholders, giving guidance on the laws and regulations that protect and advance the nation’s pipeline infrastructure.

Ariaratnam is representing the public sector and will serve a three-year term on the committee.

“Dr. Ariaratnam offers decades of hands-on research experience that will aid in the improvement of our nation’s most vital infrastructure” said says Kyle Squires, ASU vice provost for engineering, computing and technology, and dean of the Fulton Schools. “We are thrilled that a member of the ASU community has been selected to contribute on a national scale.”

Ariaratnam brings a unique background to his role on the committee, with extensive experience in the underground construction industry and a focus on trenchless construction methods, trenchless pipe replacement and horizontal directional drilling.

“My research and education focus on underground construction, and particularly utility pipes, so that includes energy pipelines, like oil and gas, as well as telecom and other pipelines,” Ariaratnam says. “I see my role as helping bridge the gap between industry and the public, making sure construction ideas are safe and structurally sound.”

Trenchless technology methods involve a variety of underground excavation tools monitored from above ground, and novel methods for replacing deteriorated water and sewer pipes and installing new utility lines. Trenchless methods are also capable of reaching inaccessible areas, such as under roadways and rivers.

Ariaratnam describes his work as providing pipeline installation and replacement methods that are less invasive and will have less detrimental impact on the environments around them.

“We’re looking at ways of doing things better,” Ariaratnam says. “When it comes to pipelines, whether it’s gas or liquid, the public safety aspect is the critical thing. I hope to share the use-inspired research I’ve conducted with key decision-makers so they can make informed changes to laws and regulations.”

Ariaratnam says he is most excited about being involved in shaping the future of pipeline technology, especially as the kinds of materials moving through the pipelines across the country are changing.

“With gas pipelines, we may see some shift to hydrogen or hydrogen blends in order to lower carbon emissions,” Ariaratnam says. “It’s exciting to be involved now as that transition starts to happen and to influence the safety regulations for making that possible.”

Ariaratnam has a track record of giving his time to help improve the construction industry. He has served on the board of directors for the North American Society for Trenchless Technology from 2001 to 2006, was the chairman of the International Society for Trenchless Technology from 2010 to 2013, and chair of the American Society of Civil Engineers Pipeline Division executive committee from 2017 to 2018.

In addition, Ariaratnam was elected to the Canadian Academy of Engineering in 2018 and the National Academy of Construction in 2019. He was also recognized as the 2021 Stephen D. Bechtel Pipeline Engineering Award recipient by the American Society of Civil Engineers for his “contributions to advancements in pipeline engineering through service to industry, educational initiatives, and outstanding research accomplishments in the area of horizontal directional drilling.”