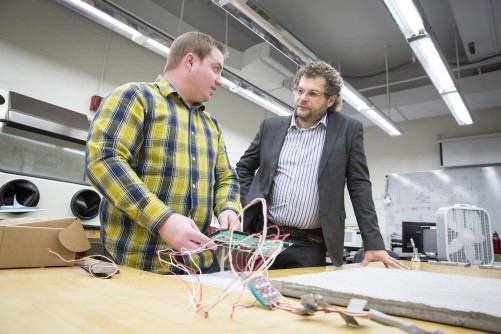 Konstantin Sobolev (right) consults with doctoral student Scott Muzenski while the two look at a sample of a "smart" concrete composite they developed that has a service life of more than 120 years. 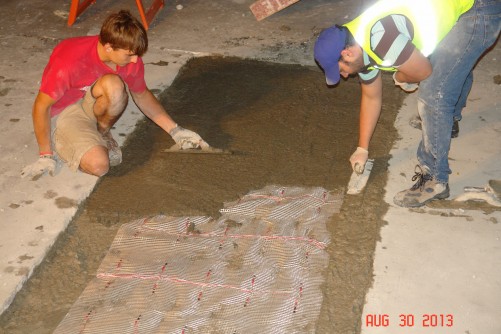 Engineering students put another layer of the concrete composite over the sensors. Students were patching a large crack in the driveway of a UWM parking lot with the product from funded research in Sobolev's lab. 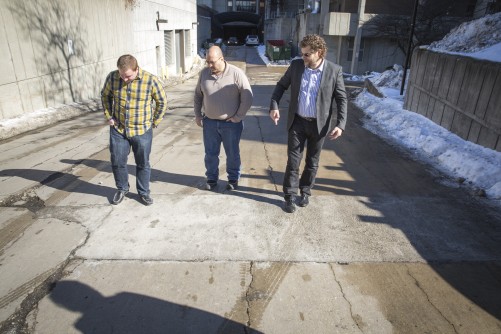 Newswise — To Scott Muzenski, the large crack that weather and wear had caused in the driveway of a parking structure at the University of Wisconsin-Milwaukee (UWM) presented an opportunity to test his research.

Muzenski, a civil engineering graduate student, had been working on a new kind of high-performance concrete created in the lab of associate professor Konstantin Sobolev. Their cement composite is a durable, water-resistant and malleable paving material with such a high level of “crack control” that the researchers estimate it has a service life of 120 years or more.

To compare, the average life span of concrete roads in Wisconsin falls in the 40-50-year range, with up to 10 percent of reinforced bridge decks needing replacement after 30 years.

In August, a crew of 25 students joined Muzenski in patching the driveway using the unique material. Then, in order to track whether the material was indeed holding up better than ordinary concrete, they gave the 4-by-15-foot slab the ability to monitor its own performance.

About an inch below the surface, the students embedded electrodes in this ‘smart’ concrete that are linked to a data acquisition system located behind an adjacent retaining wall. “This is going to tell us whether water is getting into the material and how deep it goes,” says Muzenski. “It also detects the presence of chloride ions within the material, and senses load and stress as vehicles pass over it.”

Later this year when the software is completed, the real-time data will be fed wirelessly to an online repository.

We’ll be able to observe the performance of concrete as it happens, in real time” says Sobolev.

The slab project will confirm two important features of this hybrid concrete, called a Superhydrophobic Engineered Cementitious Composite (SECC): its superior durability and its “smart” capability.

The science of cracks

The researchers point to two reasons they believe their SECC is a superior material. First, it contains compounds that make the material nearly waterproof.

As Sobolev squeezes an eyedropper of water over a small piece of the hybrid concrete, the liquid beads up on contact into almost perfect spheres that rush off the hard surface at the smallest tilt.

Normally, water pools on the surface of pavement and permeates through cracks. Add freezing and thawing cycles, and it’s no wonder that roadways are in need of frequent repair, says Sobolev.

Additives in the hybrid change the concrete on a molecular level when the pavement hardens, creating a spiky surface that, although microscopic, causes the water to bead and roll off.

The second innovation of this SECC allows the material to bend without breaking. Although some examples of a malleable concrete are currently commercially available, Sobolev’s lab has improved ductility with their composite. Super-strong unwoven polyvinyl alcohol fibers, each the width of a human hair, are mixed into and bond with the concrete. When cracks begin, the fibers keep them from becoming larger tears.

In fact, the aim of Sobolev’s material is not to minimize cracking. Instead, it’s designed to allow multiple micro-cracking, which distributes the load across many tiny cracks that are too small to let water penetrate.

Conventional reinforced concrete, in contrast, is relatively brittle, and cracks get progressively worse with the constant loading. When that happens, the entire stress is transferred to the reinforcing steel that bridges the crack.

“Our architecture allows the material to withstand four times the compression with 200 times the ductility of traditional concrete,” says Sobolev.

Since ductile concrete is more expensive than regular concrete, he sees its best application in specific places where deterioration begins, such as on bridge approach decks. That’s where concrete that is heavily reinforced meets regular asphalt. The joint, says Sobolev, cannot withstand the continuous loading.

“The bridge and the road aren’t designed to work together,” he says. “You need something between them that has the durability to handle the stress.”

He adds that the cost of his SECC is drastically offset by the reduction in labor costs for maintenance and early repairs.

The current construction on Milwaukee’s Hoan Bridge, for example, includes replacement of just such a bridge deck that will cost millions to make the bridge safe for another 50 years.

In addition to his high-performance concrete, Sobolev also sees a promising future for “smart” concrete, with uses beyond transportation. Remote monitoring at facilities such as nuclear power plants allows problems to be detected while limiting the risk of harm to employees.

The prototype of the SECC material was created in collaboration with Habib Tabatabai and Jian Zhao, associate professors of civil engineering, with funding from UWM’s Research Growth Initiative (RGI). Further support was provided by the National Center for Freight and Infrastructure Research & Education (CFIRE), and involved Michael Oliva and Tom Krupenkin of UW-Madison. 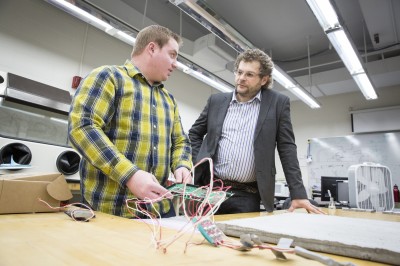 Caption: Konstantin Sobolev (right) consults with doctoral student Scott Muzenski while the two look at a sample of a "smart" concrete composite they developed that has a service life of more than 120 years. 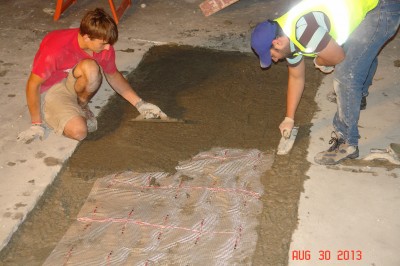 Caption: Engineering students put another layer of the concrete composite over the sensors. Students were patching a large crack in the driveway of a UWM parking lot with the product from funded research in Sobolev's lab. 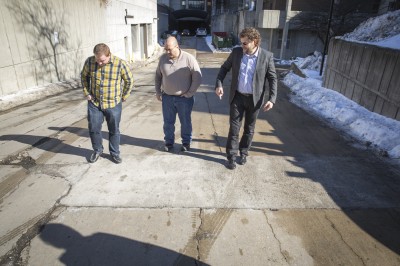