Newswise — The event began with talk of knocked-out teeth and ended with a feel-good huddle. Michael Wright, DDS ’99, MS, and three professional athletes visited the Dr. Samuel D. Harris National Museum of Dentistry and the University of Maryland School of Dentistry (UMSOD) to help spread awareness about avoiding injuries to the mouth and face.

“Recent estimates suggest that nearly 5 million teeth are injured or lost in children and adolescents in the United States every year,” said UMSOD Dean and Professor Mark A. Reynolds, DDS '86, PhD, in welcoming the guests. He noted that many of these injuries occur among the nation’s 30 million student-athletes.

The UMSOD was observing National Facial Protection Month, sponsored each April by the American Association of Oral and Maxillofacial Surgeons and other organizations. The main speaker at each venue on April 28 was Wright, a prosthodontist and entrepreneur who has developed a patented technique of making better-fitting, magnetic-tethered mouth guards.

Wright spoke about the wisdom of wearing the protective devices while participating in a range of sports. But the focus was on football for players young and old.

His guests were National Football League players Vernon Davis, tight end; and A.J. Francis, defensive lineman, both former Maryland Terrapins; and Kendall Fuller, cornerback; who was a Virginia Tech Hokie during his college career. All three play for the Washington Redskins and wear custom-made mouth guards designed by Wright.

“My grandfather and my dad always taught me, make certain that you have a Plan B. I made certain that I did well in school, that I got my education so I had many opportunities,” said Wright, going on to describe how as a prosthodontist he treats facial injuries and how as an inventor, he attempts to prevent them.

Most of the students – all boys -- raised their hands to say they played youth football, although some spoke up for soccer, basketball and track. Mouth-guard rules for youth vary by sport. No matter the activity the message was the same: avoid injuries to the face and head that can include concussion. Girls teams and coed sports can be perilous, too. Davis recalled that his first venture into athletics was as a tumbler on the cheering squad.

Representing the Maryland Department of Health and Mental Hygiene was Greg McClure, DMD, MPH, director of the Office of Oral Health, which has a brochure on facial protection to inform parents and coaches. It notes that custom-fitted mouth guards made by a dentist are better than stock devices or boil-and-bite mouth guards at preventing injuries.

Among the facts: Dental injuries are the most common type of injuries to the face; half of these can be prevented. Sixty percent of facial injuries occur during sports practices.

“I think this is a great event to have these athletes come out and speak to these children,” commented McClure as the youngsters approached the players to obtain autographs and take photos. He said that by tying the importance of oral health to the students’ activities, the hope is that they will “place that as a priority in their lives, not just now but throughout their entire lives.”

Copies of the brochure, “How to Protect your Child’s Teeth," were available along with goodie bags for the GSA students. Inside each bag: a free mouth guard made by Wright’s firm, The Wright Guard (TWG).

Bidding goodbye to the middle school students, Wright and the NFL players walked to the School, where they were treated to a cake baked and decorated as a huge replica of a TWG device.

Wright and the Redskins players gave a more technical presentation about injury repairs and mouth guards to a UMSOD group made up mostly of first-year students but that included several more advanced students drawn by Wright’s knowledge of prosthodontics.

“I was here for the expert, but it was nice seeing the patients and hearing their perspective,” said Stephen Cross of the Class of 2017. “To hear professional football players tell you that something as simple as a mouth guard can change their ability to play the game is mind-blowing.”

Davis, the tight end, described himself as a good listener. “I listened not only to my mother and father but also listened to people like Dr. Wright. He made it possible for me to go on in this game of football and continue to take care of myself.” It’s no small feat to come out of the game healthy, he said. “This game is so hard. It’s a game of inches.”

During the day, both students and players took tours of the museum and viewed a display on the history of mouth guards. It features protective face gear from times past, such as a combination nose and mouth protector from the 1890s when broken noses were commonplace among football players. And from more contemporary athletics, a mouth guard used in the 2000 Summer Olympics bears the ubiquitous rings logo.

The academy partners with the University in the UMB CURE Scholars Program, and five students who participated in the event are CURE Scholars. 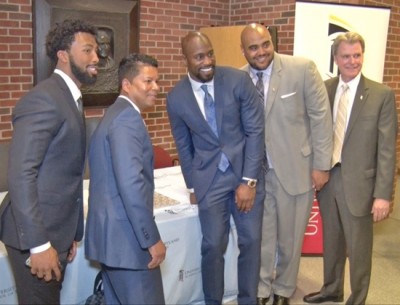 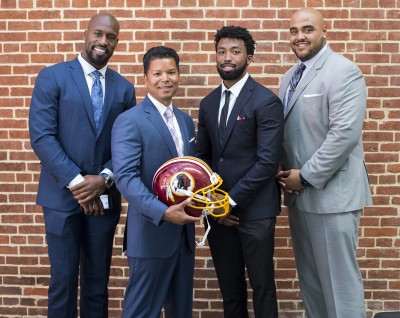 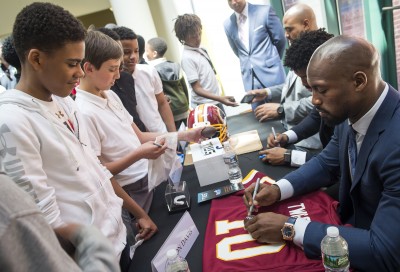 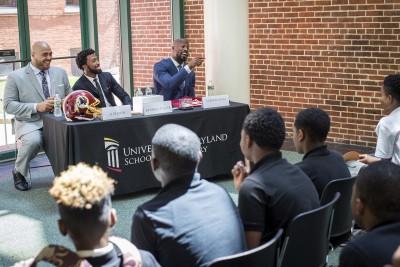