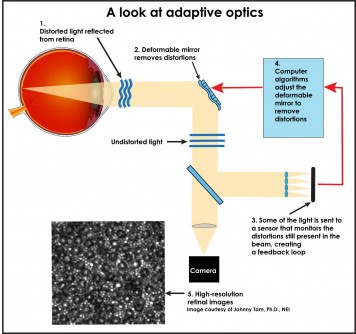 A Look at Adaptive Optics

GAMM AND WILLIAMS FLUORESCENTLY LABELED PHOTORECEPTORS GENERATED FROM STEM CELLS AND PLACED THEM IN THE RETINAS OF MACAQUES. MIGRATION OF THE PRECURSOR PHOTORECEPTORS (RED) AWAY FROM THE LESION SITE WHERE THEY WERE INITIALLY PLACED IN THE RETINA IS SHOWN (IMAGE A). NEURITES FROM THE TRANSPLANTED CELLS WERE IN CONTACT WITH HOST NEURONS (IMAGE B). PHOTORECEPTOR PRECURSOR CELLS EXTENDED AXONS TOWARD BIPOLAR CELLS, ANOTHER TYPE OF NEURON IN THE HOST MACAQUE’S RETINA (IMAGE C).[5] 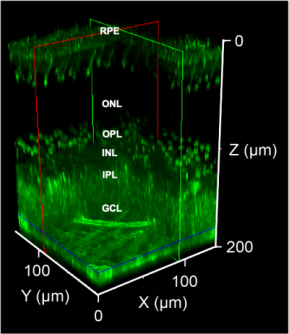 Newswise — As regenerative therapies for blinding diseases move closer to clinical trials, the National Eye Institute’s functional imaging consortium, a part of the NEI Audacious Goals Initiative (AGI), is pioneering noninvasive technologies to monitor the function of the retina’s light-sensing neurons and their connections to the brain.

Just as the 1960s moonshot involved far more than launching a rocket, reversing blindness involves far more than regenerating retinal cells. “Once the rocket launched, we needed the means to course correct, land and get back to Earth. Once stem cell-derived photoreceptors are placed in the eye, we need the means to noninvasively confirm they connect to other retinal cells and function,” said Leonard Levin, M.D., Ph.D., McGill University, and AGI steering committee member.

Functional imaging will be essential when stem cell and gene therapies are put to the test. Early clinical trials are not expected to result in substantial and immediate visual changes, so measuring changes at the cellular level will be necessary to create a baseline and to understand to what degree therapies were successful.

When the AGI launched in 2013, existing noninvasive imaging lacked sensitivity to detect cellular and functional changes in the retina. In response, in 2015 the initiative funded five projects aimed at improving noninvasive functional imaging technology.

Here’s a look at the progress of those projects.

Austin Roorda, Ph.D., University of California Berkeley, (EY025501), collaborated with a team led by Daniel Palanker, Ph.D., Stanford University, who designed a system that maps retinal cell interaction to better understand how the retina processes visual information before sending it to the brain. The research led to a novel way to visually record nerve cells firing based on how the cells change shape.

The technique involves a special microscope equipped with a high-speed camera that collects 50,000 frames per second, which enables researchers to detect very subtle changes in cell shape.[1]

Probing further, Palanker’s team linked such cell shape changes to spikes in voltage across the cell membrane as the cell fires. They used confocal microscopy, a technique that uses fluorescence and lasers to focus on a neuron at various depths to collect serial optical sections. Combining those serial images with information about trans-membrane voltage, they created 3D cell models that reveal how neurons take a rounder shape as trans-membrane voltage temporarily changes the tension and stiffness of the cell membrane [2]

Roorda’s collaborator, Ramkumar Sabesan, Ph.D., University of Washington School of Medicine, combined high-speed imaging techniques with optical coherence tomography (OCT), which uses light waves to take cross-section pictures of the retina, and also with adaptive optics (AO), which uses a deformable mirror and computer algorithms to compensate for distortions to light as it passes through the eye’s cornea and the lens. Adaptive optics was pioneered by astronomers; ground-based telescopes are equipped with AO to correct for light distortions caused by the Earth’s atmosphere.

Combining imaging OCT and AO enables investigators to watch as color-sensing cone photoreceptors change shape on a nanometer scale as they capture light and convert it into electrical signals in a process called phototransduction.[3]

Such observations open the door to the possibility of noninvasively imaging neural signaling from large areas of neural tissue, including the brain.

By comparison, conventional methods for recording nerve cells firing are invasive, requiring electrodes to be placed near the nerves or the insertion of fluorescent markers into the cell.

Eye movement interferes with obtaining sharp images of the retina using conventional optical methods. Eye movement presents further challenges when attempting to image changes in the retina at the cellular level, such as with AO. Many people who could potentially benefit from regenerative therapy have difficulty with involuntary eye movement.

Dubra’s team developed a pupil tracking technology that compensates for involuntary eye movements. The approach uses technology that processes images concurrently as they are downloaded from the camera, which enables many more frames to be taken per second.

“The technology enables clinicians to track cells across patient visits and can be used as an add-on to any ophthalmoscope,” Dubra said.

Watching photoreceptors respond to light in a living eye

In collaboration with Dubra, Jessica Morgan, Ph.D., University of Pennsylvania, developed an AO-based method to investigate the function of cones.  By imaging cones with infrared illumination and applying a visible stimulus to the photoreceptors, Morgan’s team measured a change in reflectance from the cones that is tied to phototransduction.[4]

“This intrinsic optical signal, termed the optoretinogram, will enable noninvasive assessment of photoreceptor function at the cellular level both in health and disease,” Morgan said.

In collaboration with David Gamm, M.D., Ph.D., University of Wisconsin, the team combined fluorescence with AO and scanning light ophthalmoscopy, a retinal imaging technique, to track human pluripotent stem cells transplanted to the retinas of monkeys. By fluorescently labeling the stem cells, the team was able to observe the transplanted cells integrate and develop functional processes.[5]

Prior to this study, little was known about the dynamic nature of transplanted cells in living retina at the cellular level. Most of what was known was inferred from OCT and tissue studies.

Their method uses two-photon excitation microscopy to detect defects in vitamin A metabolism. Such defects could potentially impair the retina’s ability to regenerate the visual pigments in photoreceptors of the eye that are crucial for light detection.

Palczewski’s team also addressed a key barrier to realizing the benefits of using two-photon excitation microscopy to image retinas in people. That is, concerns about the high light exposure necessary for the images to be informative.

After controlling certain properties of the excitation light, safety studies showed no damage to retinal tissue after prolonged exposure to their more efficient two-photon excitation system.[6]

In eye diseases such as glaucoma and optic neuritis, vision loss is due to loss of function of the optic nerve, resulting from injuries to or loss of axons, the bundle of nerve fibers that transmits visual information from the retina to the brain.

Conventional non-invasive imaging methods are limited in their ability to visualize optic nerve. OCT accesses only a small portion of the nerve within the eye, revealing none of the nerve extending into the brain. Magnetic Resonance Imaging (MRI), which detects water signals to reveal tissue integrity, can show lesions on the optic nerve, but provides insufficient information to distinguish inflammation from other underlying pathology.

In clinical studies involving patients with multiple sclerosis, his team established that DBSI could be used to detect and quantify axonal injury and loss of the optic nerve in patients over time. In healthy control subjects, Dr. Song’s lab also demonstrates that DBSI is able to detect optic nerve activation upon visual stimulation.

In an animal model of optic neuritis, DBSI differentiated and quantified optic nerve inflammation, demyelination, and axonal injury/loss in the presence of nerve swelling. Furthermore, the extent of the pathology correlated to visual acuity over time.[7]

DBSI could potentially serve as a biomarker to predict treatment outcome and to determine when progressive disease starts.

Together, these AGI-supported advances in functional non-invasive imaging provide a foundation for testing regenerative therapeutic strategies. Further calibration is needed to sort noise from signal, so these advances can be deployed to detect potential benefits to visual function among people enrolled in early clinical trials. To learn more about AGI activities, visit www.nei.nih.gov/audacious